WooHOO! I’m halfway through the last piece in this issue of Chicana/Latina Studies, our semiannual client journal. This issue seems to be an especially good effort. One of the authors is such a good writer and she has such an interesting subject that, IMHO, she could be writing her stuff up for The New Yorker. She’d need to put out some effort to learn to write creative nonfiction and escape the academicese, but given the quality of her style, I’d say that would not be an unreasonably tall order for her.

What with The Kid’s project to streak through a new master’s degree program (while holding down her usual two full-time jobs…), I suggested that if she wanted me to do the whole job, rather than splitting it the way we usually do, that would be okay by me….

Yipes! Don’t break the Internet leaping at that one, Kid!

So I’ve been reading all the copy for the entire issue, which is fine by me because a) not a lot of work is in-house just now and b) things having been mighty slow over the past quarter, I sure can use the monnaie.

It’s gone a lot faster than I thought it would. So I think, anyhow: these things will still have to be subjected to a second reading. But still, it appears that won’t take so very long. With any luck. the copy can wing its way back to the journal in another couple days, record time for a whole issue’s turn-around.

And lhudly sing huzzah, a new spectacular Chinese scientist is at the door, wanting an estimate on an arcane paper. This is good: we have missed our beloved Chinese scientists. It has been a slow 2018 Q4! 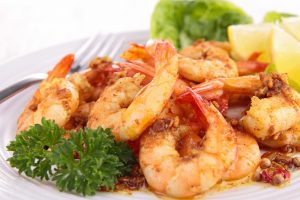 By golly, I can not figure out why anyone spends their money and their time on third-rate fast food, when it’s so quick, so easy, and so amazingly delicious to toss together an amazing meal out of real, unprocessed, healthy food.

Today it was a few scallops sautéed with some garlic and some cut-up asparagus, tossed over some Italian pasta (tagliatelle!) and doused with some Pomí tomatoes, an Italian answer to canned tomatoes that comes in a box.

Failed to take a picture of that, but did grab one of some shrimp and spinach that was awesome…and now, having “organized” the 87 gerjillion images on the hard disk, have lost it. But…it was awesome. And took all of about 10 or 15 minutes to fix. To wit:

Remove the shrimp from the pan. Add a little more olive oil or, if you prefer, the butter. Add as much frozen spinach to the pan as you think the diners will eat. Stir this over medium heat until it’s defrosted and cooked to your taste. Add a teaspoon or so of sugar, if you so desire, to soften the flavor of the spinach.

Fill out the meal with a sliced tomato and some sliced avocado on the side.

Cassie the Corgi steadfastly refused to use the doggy door installed, lo! these many years ago, for Anna the German Shepherd and Walt the Greyhound. So I shut it and locked it and forgot about it: it became part of the wall. As it were.

Welp…of late I’ve been invited on this day trip and that day trip. My son has indicated less than high joy at the prospect of babysitting Ruby the Corgi while I gallivant around the state, and my friends have evinced even less excitement at the thought of taking her along. I can’t leave her locked in the house all day. And I certainly can’t leave her out in the rain, heat, and coyote territory for eight or ten hours at a time.

Would she….? Could she…learn to use the doggy door?

Who’d’ve thunk it: the answer is she sure can. She quickly got the idea of pushing her way out. Coming in is a different matter: she doesn’t seem to remember that if she can get out through the plastic flaps, she can get back in through them, too.

I think a week or so of drilling (read “bribing with doggy treats”) will persuade her that she can come as well as go.

She’s a smart little dog. But one must bear in mind that she’s not a puppy. Dogs, like humans, tend to get sot in their ways as they age. So it will take a little longer for her to set both ideas in her mind: out and in.

Not real thrilled at the idea of going off and leaving that thing hanging open… She is, after all, decidedly not a German shepherd. A grown man can climb through that thing (and has). But I think I can disguise the area around the opening so it can’t be seen from the back wall. If someone’s going to climb over the cat barrier to break into the house, they’ll break in through the back door or a window, anyway. So though the dog door does indeed present some risk, it’s probably no worse than any other risk here in the ’hood.

Not so much, despite the alleged “atmospheric river.” {snicker!} It had been sprinkling shortly before the dog and I rolled out of the sack this morning, but despite beautiful, plump, fluffy clouds floating through the blue, blue sky, no serious rain has developed. It is, however, perfect weather for a doggy-walk. Particularly if you’re a corgi.