An excuse not to go on the mountain! 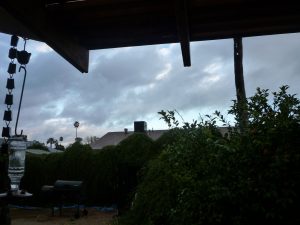 Okay, that’s way up there in the “it’s all about me” department, eh? In reality, it’s wonderful to see some rain, even though it’s the tiniest little bit. California is being soaked, people near the burn areas are having evacuate their neighborhoods for fear of mudslides, and us? We’re getting something more like thick humidity.

More like the smell of rain than actual rain…

In fact, I didn’t go for the required morning hike because I was loafing with the computer, reading news and social media blather. But when the dogs finally rounded me up and herded me into the kitchen to fix their breakfast, I saw the light rain and felt glad not to have left the house. Even though it’s not much rain, I would not have been happy at having water fall out of the sky a mile from my car.

We need the rain fairly desperately. The drought continues with little let-up — there was some rain and snow awhile back, but that was it. If this continues, as it likely will, the area eventually will not support the hordes and hordes of humanity our honored business leaders and their political hacks have spawned here. It would not be the first time: centuries ago a large tribe of entrenched, technologically sophisticated Native Americans (we still use the traces of their canal works) up and disappeared from the area. The most likely explanation for their exodus was drought & depletion of resources.

My son dreams of 60 acres in the middle of nowhere, there to construct a hermitage. In fact, he found a piece of land down near the Chiricahuas with grandfathered water rights and a surface stream flowing through it. DAYum! To die for. He actually located two of them but one was a little too far east. Hit New Mexico this far south, and you might as well be in West  Texas. Heaven help you. The east end of the Chiricahuas is absolutely as far east and as far north as you’d want to go in that area…and even there… One would have one’s doubts.

A-n-n-n-d… Our voice instructor just canceled this noon’s coaching session, she feeling a shade overwhelmed by the bouncing Holy Week doings on the way in the door. Sorry for her…but for me that frees up the whole day!

So…I promise to spend part of it (for a change) practicing the keyboard/sight-reading lesson. Honest.

And once the sky clears, the way will be open for a hike, after all. 😀

And it’s time to pay the auto and homeowner’s insurance again…God, I hope there’s enough in the bank to cover that annual headache.

Damned if there’s not!!!! The Honored Internal Revenue Service returned TWENTY-EIGHT-HUNDRED DOLLAH to my checking account!

However, I see that the amount I set aside for 2018 tax & insurance (both) will just cover the insurance bill. Safeco has decided, unilaterally, to revalue my house, thereby creating an opportunity to jack up the homeowner’s insurance through the now very expensive roof.

So there’s another hassle to deal with: will have to call Insurance Dude to see if he can get a better deal for this year. Jeez.