Having rolled out of the sack somewhat before five, the dogs and I were on the road as the minute hand hit 12. (Remember those? Yes, my house still has clocks with hour and minute hands!) It was dark out yet. The sky began to pale a bit as we hit Richistan. We got back to the Funny Farm right at 5:40, about the time we usually head out.

But oh! Is it lovely to get out at that hour! Though in August it’s a bit sticky out there, the air was reasonably cool. No sun beating down on you. And no one around!

We encountered one human: a guy on a bike with a headlamp to help him make his way. That was it.

No coyotes. (Surprising, as dawn is the prime hunting hour.)

No neighbors standing out in front to intimidate you from letting your dog dump on their yard. 😀

No early morning commuters headed for Starbucks in a dazed and cranky mood.

And most charming, no fellow dog walkers!

Not that I don’t love my fellow dog walkers…but wrestling with two gingery corgis who want nothing more than to pounce your (fill in the blank: pit bull/mastiff/German shepherd/90-pound lab/Great Dane/angry Chihuahua) is far from the most pleasant way to start the day. Nor, indeed, does every one of my fellow dog walkers appear to be having the best of all possible fun keeping their own hounds under control. Odd, isn’t it?

So really…the dark before dawn was pretty much the ideal time to circumnavigate the ‘hood with the dawgs.

And now, a couple hours later, it’s still pleasant enough to sit outside. The various kids are frolicking around the street before they’re carted off to school. Ruby is yapping at every passing dog and its human, the hummingbirds are grating, and the doves would be feeding were not for Ruby chasing them.

We have a nice little covey of whitewings hanging around. So I decided to put up a couple of feeders for them, it now being too hot for much food to be readily available. The bugs go to cover, underground or under the rocks. The seeding plants barely cling to life. One wonders why the birds don’t migrate north with their relatives.

Well. The reason of course is that a city full of humans amounts to a riparian area on steroids. Stuff grows here. Water flows from long hollow ropes strung across the ground and sprays out of mysterious springs that erupt at the same time each day. And a forest of trees provides a lot of cover and roosting space.

How do you like this gadget I scored from Amazon? 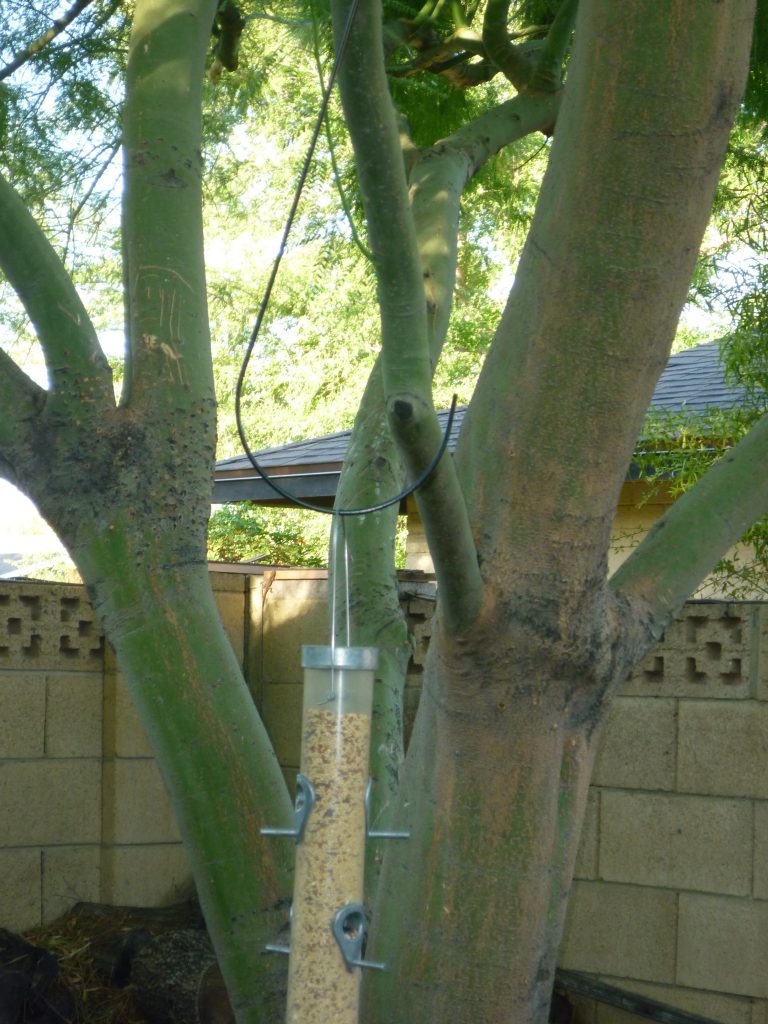 Dunno how well you can see the device: it’s a wrought iron hook that fits over the tree branch and then swings down into an elegant swoop to hold your bird feeder. It works handsomely, and it makes reloading the feeder so much easier, by making it easier to take the thing down and put it back up.

The reason I bought it, however, had nothing to do with aesthetics or convenience and everything to do with the usual yard hassles.  Luis, when asked to clear some space so Gerardo’s men could move around the backyard without risking decapitation by tree limb, blithely hacked a big chunk out of the lime tree, exposing its interior to the full blast of west sun. I was surprised, because Luis is usually pretty savvy about trees. But he sure missed the proverbial boat this time!

To keep the tree from dying, I had to wrap swaths of shade cloth around the major interior limbs. That wasn’t enough to protect it from the summer blast furnace, though; this spring I had to drape more lengths of cloth across its entire west face.

This meant I couldn’t hang the feeder from its usual perch in the lime tree…said perch now being wrapped in plastic shade cloth. Lovely.

We still have a feeder hanging from the north eave, but it’s not readily visible from the deck. And since the main reason one hangs up a bird feeder is to watch the birds, I missed the lime tree station greatly. Solution: hang it from the paloverde tree.

Alas, though, the hang-it gadget I had would not fit over a paloverde limb. New solution? So obvious: AMAZON.

Forthwith they sent three of these swell doodads. The top hook just fits over the desired limb. Though it’s a little closer to the ground than I’d like — leaving the birds possibly vulnerable should one of the neighbor’s effing cats come over the cat-repelling wall — I think they’ll have plenty of time to escape should that happen.

Matter of fact, Ruby just strolled there and terrorized them. They all flew off, leaving a bold wren behind to gorge down as much as it can before the competition returns.

Ruby is actually drawn by the twitta-twitta-twitta alarm call of a whitewing dove. If one of them makes the outtahere! noise, she rockets out the door like a furry little missile and gallops around under the trees. Doesn’t seem to occur to her that by the time they’re making that noise, they are already soooo gone.

Summertime, and the cacti are blooming. Across the street a neighbor has a huge, invasive columnar cactus. The things can be quite a job to keep under control in your landscape. However, it makes these amazing blossoms: 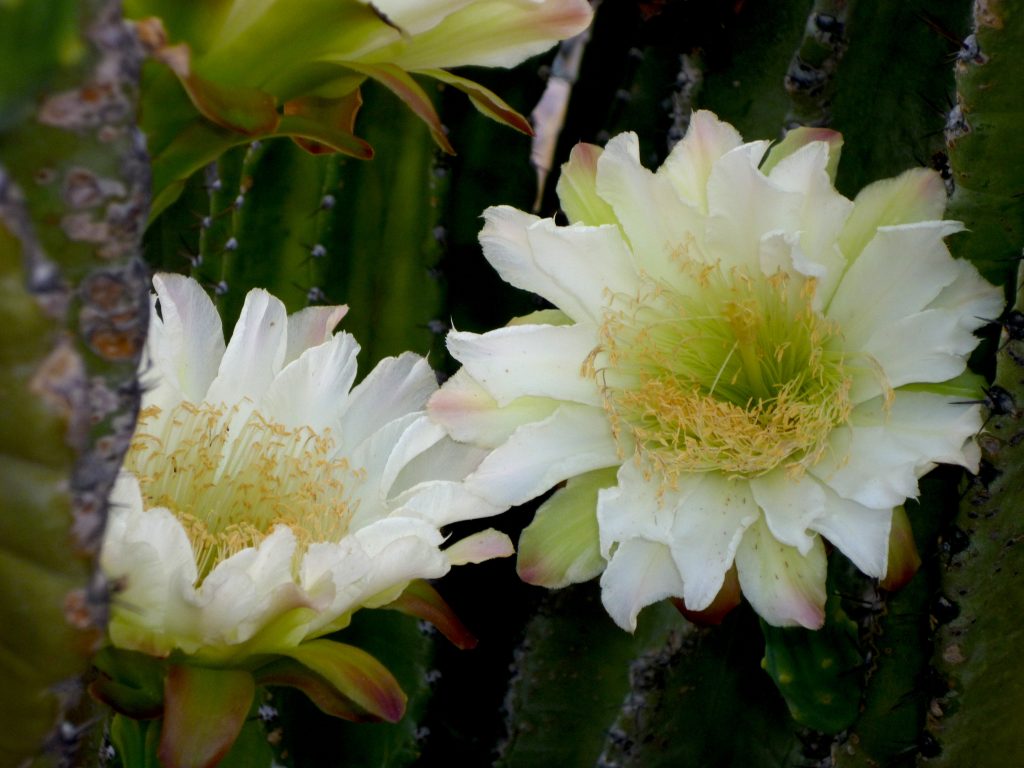 Strange and wonderful, aren’t they? They attract strange and wonderful pollinators, too, especially bats (which is one of the reasons they open at night) and a particularly crazy flying critter called a “carpenter bee.” This little animal can best be called a sorta flying thing. Like a bumblebee, which it sort of resembles, it leaves you wondering how it ever imagined it could get airborne. Tried to catch a photo of one, but it came out a bit on the unclear side. 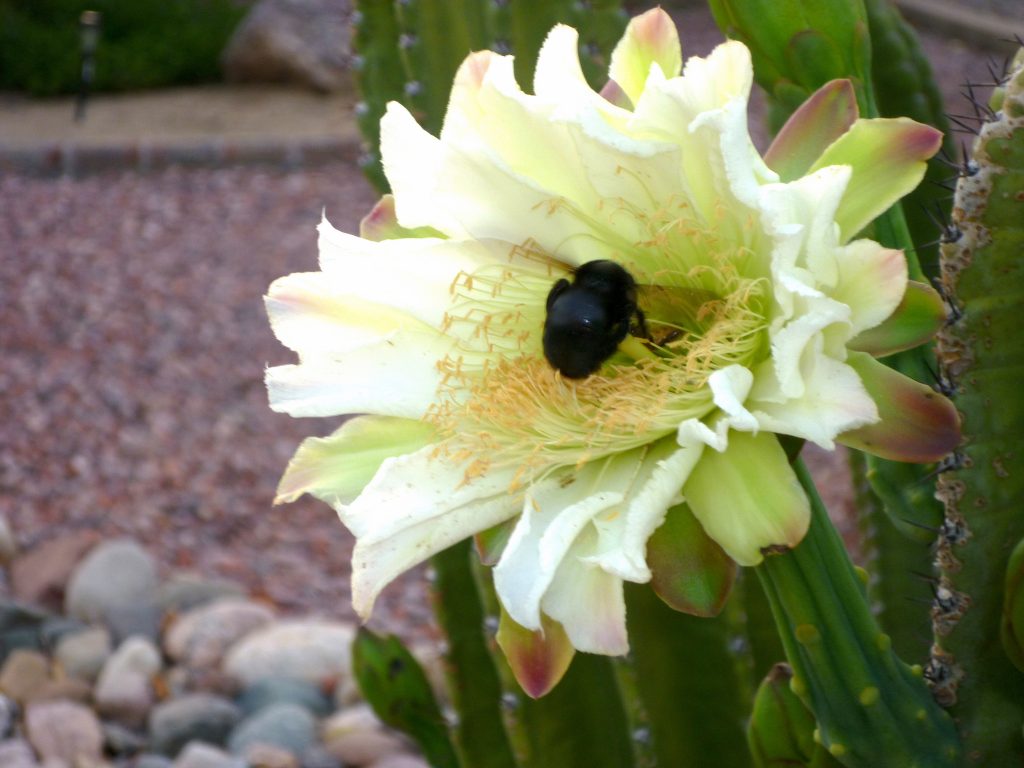 That flower is as big as your whole spread-out hand. So you get an idea of the critter’s size. Hysterical posts published by exterminating companies aside, carpenter bees are pretty harmless (unless you try to grab one) and are actually highly beneficial pollinators.

Also in summer we still have the ghost of Arizona’s once vigorous monsoon season. The “heat island” effect now bounces rainclouds away from the urban areas, and of course the climate change that all the President’s …uhm, “men” tell us does not exist has created a decades-long drought. That notwithstanding, we’ve had at least had some impressive cloud displays. 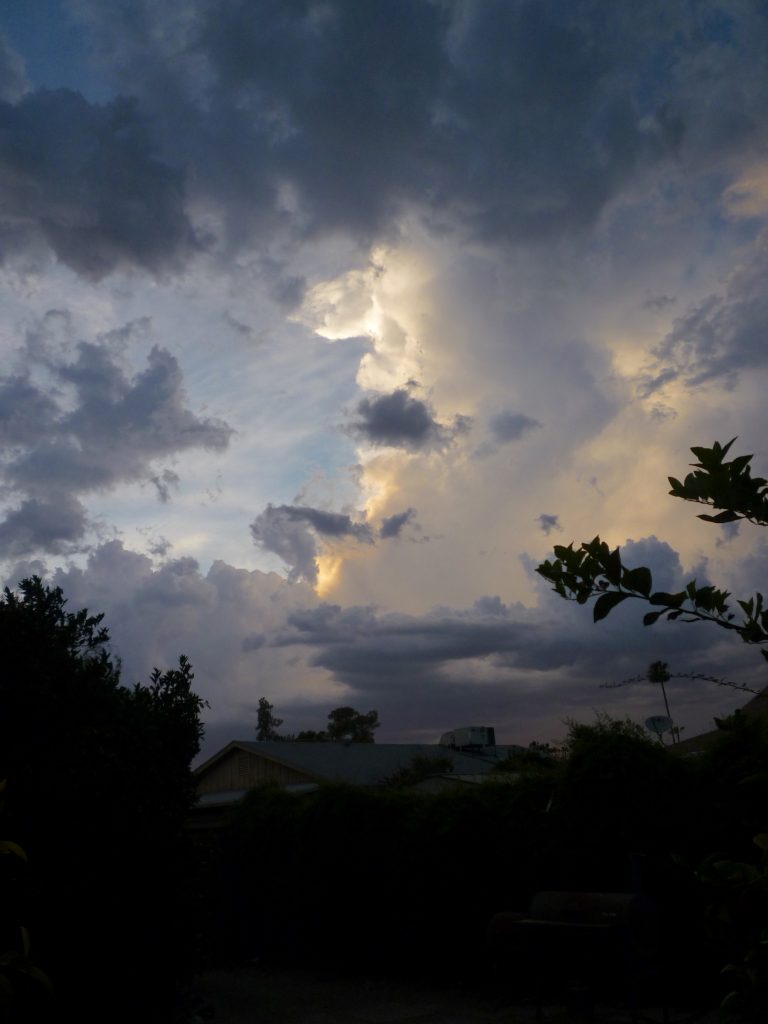 Alors. It’s warming up out here. So I suppose it’s about time to go inside and get started on something constructive. À bientôt, then.