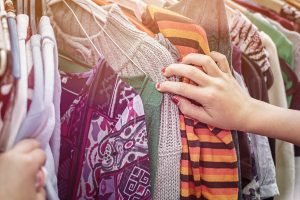 Yesterday WonderAccountant — who lives across the street — suggested we go to coffee in the morning and then make a run on the venerable Assistance League thrift store, which was having a 50% off sale.

As you know if you’ve been hanging around this blog for awhile, I like to shop at My Sister’s Closet, an upscale second-hand store where Scottsdale’s finest society matrons consign their designer duds after a single season has passed. The Assistance League store has something of the same appeal: it’s situated on the eastern edge of the North Central district, where Phoenix’s legions of Old Wealth nest. Whether these folks dump their clothes and their household tschotschkes after just a season of use is doubtful — that set tends to be wiser and less spendthrift. They’re riches, but they’re not so much nouveaux riches. They do, however, buy from the same upscale stores, so much so that both shops can dedicate special racks for stuff from Chico’s and by specific selected designers, for example.

So this is always fun.

On Friday I’d dropped $108 on the most spectacular shirt I’ve ever seen (which collected five compliments from fellow churchgoers this morning, BTW), so decided to refrain from further spending. But WonderAccountant was working under no such constraints. She snabbed a really, really handsome shirt, a designer number in a lovely pattern and fabric — two bucks. And a very kewl denim jacket with fancy beadwork front and back — four bucks.

So W.A. reminded me, by example, of what a hoot it is to shop at stores like this.

And I was also reminded of my former next-door neighbor in lovely uptown North Central, one the rare decent human beings I met in that neighborhood during the entire time I lived there. (Richistan, as pretty as its shaded lanes may be, does harbor large herds of extraordinarily unpleasant snobs.)

LaVerne, as we’ll call her here, grew up in a small middle-class town in the Darkest Midwest. The child of a righteous Baptist family, she married a Nice Jewish Boy and, over her parents’ wildest objections, converted to Judaism, and lived happily ever after, pursuing a very conservative faith and lifestyle for her husband and her children. And being a good Midwestern girl, LaVerne was nothing if not thrifty.

LaVerne kept her entire family crisply dressed in the latest styles…and as far as I can tell, never spent a dime on clothing. Here’s how she did it:

Remember Buffalo Exchange? It was a resale shop where you could bring in your used clothing and, if staff thought they could sell the stuff, they’d give you some money for it.  I guess they’re still around…I haven’t seen one in these parts of late, but you may have one near you. At the time, there was one right on the fringe of North Central.

Okay. LaVerne would never, ever pay full price for anything. She didn’t even pay sale prices, most of the time: she bought stuff for get this junk out of our store prices. As it develops, in those days department stores (remember those?) changed out their stock every few weeks. Whatever hadn’t moved off the racks went on sale for a couple of weeks. And whatever remained of the end-of-season sale merchandise was moved to an ignoble department in a dank and distant corner of the store, where they practically gave it away. In fact, they probably would pay you to cart it off.

Well, that was exclusively where LaVerne shopped. And she was an exceptionally keen-eyed shopper. Where you or I would go into one of those departments and see only the rayon purple-and-chartreuse polka dots, LaVerne could walk in there and snag very nice, sharp, perfectly acceptable clothing…for everyone in her family. Yes. For herself. For her husband. For her high-school-age son. For her middle-school-age daughter.

Three or four times a year, LaVerne would raid the family closets — after hubby and kids had left for work and school, so as to evade the squawks of dismay. She would strip out everything she’d bought the previous season and schlep armloads of used clothing down to Buffalo Exchange. Most of this stuff, she managed to unload upon them(!). Thus, she’d walk away with cash in her purse…every time.

Whatever she couldn’t foist back onto Buffalo Exchange, she would donate to the Hadassah thrift shop, which of course would give her a fistful of receipts. She and her husband were affluent enough (he owned a custom drapery-making business that provided stuff for Sears and Penney’s as well as individual customers) that they could make use of a charitable deduction.

She now took the cash she’d collected from Buffalo Exchange over to the PLEASE-take-this-junk-away rack at the Dillard’s and the Bullock’s and the several other stores of similar ilk that existed then. And she would refill the family closets.

Everyone in the house was handsomely dressed — nice but not gaudy — and she never spent more than a few dollars on their wardrobes. If she spent that much at all.

She was, in a word, amazing. Truly an amazing woman. ♥

I’ve never attempted to scale those heights of thrift, because I cannot see the wearable clothing on a get-this-outta-here rack. When I go into one of those departments, all I see are the purple-and-chartreuse polka dots. It takes a special skill to find real clothes in those places. And she had it.

But from her I did learn that there are a whole lot of upper-middle-class and wealthy women who never wear their clothing out. Me, I wear it until it falls apart. If it doesn’t fall apart, I wear it while it’s out of style and keep on wearing it until it comes back into style. But the ladies of Richistan? They buy clothing all the time — usually not on sale — and they often don’t keep things more than a few months. I met lawyers’ wives, while I was playing the Society Matron act, who who would never wear a  spectacularly expensive designer cocktail dress more than once, lest one of their colleagues recognize it from some previous Junior League or Bar Association shindig.

Yes. They were parodies of themselves. And yes: they really did do that.

One woman, the wife of a successful commercial real estate mogul, would fill up her closet with the current season’s styles and she would move the previous year’s spring (or summer, or fall, or winter) wardrobe over to another closet to be used as gardening and housecleaning garb. When that season was over, out they’d go. Unlike LaVerne, she wouldn’t try to sell discarded clothes at Buffalo Exchange. She would just schlep them straight to the charity society’s store.

So: the message here is that thrift stores near upscale neighborhoods often have very nice, lightly used (sometimes unused, with the price tag still attached) clothing at give-it-away prices. And if you don’t tell, nobody will ever know where you bought that outfit.

3 thoughts on “The Thrift Store Jamboree”