Yeah. Literally, that IS what I’m doing: sitting on the front patio watching the two old wicker rocking chairs I just painted dry. 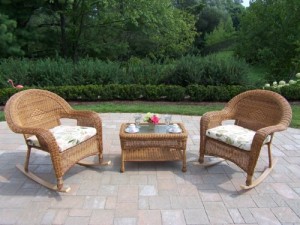 Not mine. Not real wicker. Not white. Plus if you have to ask, you sure as heck can’t afford ’em!

In the fenced west side yard, where these two creatures normally live, the devil-pod tree and the paloverde are shedding copious drifts of debris, which would like not to see stuck to the new paint job. By way of obviating that problem, I dragged the two rockers out to the front yard and set them up on a big old drop cloth. Now we have the weathered, freshly repaired (again) rockers and backsides of these fine pieces of furniture spray painted from here to the far side of b’gone. They should last, I hope, for another couple of years.

Next, I have to wait until the rockers dry, then flip chairs right-side up, and paint their seats and arms.

This poses a problem. I can’t set them on the deck, because the paint’s still tacky and I don’t want white stripes decorating the fake wood flooring out there.

But…I can’t safely leave them sitting unattended in the front yard, either.

One of the charms of living in a central city neighborhood, a garden spot served by a lightrail boondoggle whose main purpose is to transport meth-addicted transients up to the end of the line and dump them into said neighborhood, is that anything you leave out front that’s not red-hot or nailed down will quickly be stolen.

These old cheap chairs that I got lo! those many years ago at Pier 1? Yeah…”cheap” is no longer the operative term. Have you priced outdoor furniture these days? Holy mackerel! It would cost at least $500 to replace these things…and that’s if I can get the stuff on sale. Pier 1 has gone away. Real wicker is now a rarity — all you can get is that “weatherproof” plastic stuff, which is OK…but…but it’s not really wicker, y’know. And it is all stupefyingly overpriced.

You question this premise? Check this out! SIX HUNDRED AND SEVENTY TWO DOLLAH (plus tax…) for a pair of them at Home Depot. These are the chairs, absolutely. $340 apiece!!!!!!!

“Old” is the operative term for these chairs of mine. I brought them over from the old house…in 2009. Incredibly, even though that happened yesterday, the date suggests it was 11 years ago. They’ve been repainted more times than I can remember. The plastic-wood repair job where Anna — or was it Charley? — chewed the ends off the rockers has held up well, but after awhile the paint begins to peel off.

And if you’re not paying attention? Well…the reason for today’s antic is that one of the rockers, now pretty much bald in the paint department, got soaked with water from the potted plants’ dripping system and SPLIT!

And while I’m at it, might as well apply another coat of paint to the entire surface of each chair. This requires two cans of Rustoleum, which seems to be about as weather-resistant as any product out there. So…the chairs are drying on their drop cloth. And I’m keeping watch over them from the front courtyard….whose sprayers will soon come on and drench me and my computer. And my glass of beer, consumed prematurely in a fit of mild consternation.

The tomatoes in front are growing — these, from some Campari tomatoes whose seeds I dumped in the ground out here and in a pot in back. The ones in back are doing MUCH better, I think because they have actual grow-able soil. The ancient flowerbed out here is rock-hard: caliche through and through. Digging out Satan and Proserpines ugly mini-bamboo plants about killed Gerardo’s guys…that should’ve been a clue, right? If two guys strong as oxen can’t budge that cement-like dirt, why would anyone think a tomato plant could?

About a dozen baby tomatoes are clinging to the plants in back. Out here…uhm…well…three blossoms? On plants about a third as high as the ones in back?

Not surprising, though. Any time I’ve gone in there over the past few years, there’s been NO ONE in the store. Maybe one or two other customers. For awhile, they strategized with a kind of “hard sell” approach: posted a sales person at the front door, and as soon as you walked in, this pest would pounce! And demand to know what you were looking for and yadda yadda and leave me alone, goddammit! This annoyed me so much, I pretty much stopped going there.

But gosh. The chain’s disappearance means I’ll never be able to replace the beautiful made-cheaply-in-someplace-like-Afghanistan drapes in the bedroom. And never be able to buy another pair of wicker rocking chairs that I can afford. Never get inexpensive but extremely cool wine glasses. Never find beautifully designed cheap dinner dishes that I can feed the dog from or use to handsome effect as indoor plant pot saucers. Never get any more attractive, affordable seat cushions for the outdoor chairs. Never get any more paper flowers that are ten times prettier than Michael’s.

{Sob!} is the operative term.

The paint job came out well! I figure this will be about the last gasp, though, in the repainting saga. Once this layer wears out, the chairs are probably done for.

Got the idea of laying down a polypropylene rug out on the deck, one that might lift the chairs runners out of the puddling daily watering episodes. But…so…even if the polypro doesn’t rot away, what will it do to the deck underneath? And will it really protect the aging rockers enough to keep them from falling apart (again)?

WhatEVER. The exigency is staved off, for the nonce. I’ll think about it another day.