Bila the Bosnian Painter dropped by this fine Sunday morning. He was as entertained by the story of the clueless painters as he was by the new-to-him Corgi (Anna the Ger-Shep owned this place the last time he was here). He proposes to do the job for $400 to $500, as opposed to the $800 Jeff the Painting Entrepreneur wanted for his hapless campesinos. That includes the garage, for which Jeff the P.E. belatedly decided he wanted another $250.

So, that makes the day feel a great deal brighter. And isn’t it appropriate for the Workman Waltz dance card: the Danube flows right through Croatia and Serbia! 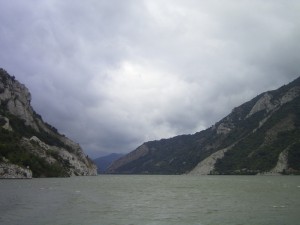 The residents of which nations, we might add, are responsible for the presence in our country of many excellent artisans and craftsmen (those who survived the genocide). Bila saw action in that war and eventually fled to Western Europe. Over time he made his way to North America and the United States. Eastern Europe’s loss, our gain.

For aspiring and arrived writers of various sorts, here’s an entertaining read on “how to write.”

This article debunking a widely beloved Limbaugh-style myth has been online for several days at The Atlantic. That  makes it “old,” I suppose, but apparently it’s attracting plenty of traffic. As usual, the comments are as interesting (or more so) than the post.

Lately I’ve developed a craving to seek out new-to-me PF blogs, since those sites are now strewn like ribbons in gay profusion across the Internet. Here’s a guy (I assume) who dabbles in oil securities, writing at Beat the Index. He does the numbers for electric cars and concludes, not unsurprisingly, that they don’t yet make great financial sense for most consumers.

Bible Money Matters is not new to me, but I haven’t visited in way too long. Peter, I see, hasn’t lost his touch. Check out this entertainingly written and good advice on what he calls “zombie” accounts.

At My Family Finances, John posts an interesting rumination on the sociological impacts of college degrees, complete with some eye-opening comparisons and graphs.

Ever have that “uh-oh…” feeling? Jefferson at See Debt Run had a pip…in the middle of the night!

The Outlier Model’s proprietor CF urges us not to donate to charities. Drop over there and find out why.

At another site that’s not new to me but not visited enough, Joe Plemon and his son Jonathon put their second fix-and-flip on the market. Looks like they’ll do pretty well on this one, having learned a lot from their first experience.

Edward Antrobus, much like M’hijito, appears to be stuck in a job any halfway competent high-school graduate could do, making his expensive college degree look rather pointless. Offered a promotion, he agonizes.

Here’s something rather amazing at Earth and Money: check out the response EaM got to a post written somewhat earlier about a type of packaging that looks pretty unecological.

Lately I’ve noticed Add Vodka, another one of those great Canadian blogs—check out proprietor Daisy’s post on the startling cost of owning a car for those on the north side of the border!

And Wealth Artisan is another site that only recently came to my attention. Here’s a tongue-in-cheek bit of advice for budding entrepreneurs.

Everyday Tips and Thoughts presses one of my buttons: sales morons who little-woman the female customer.

And in the old friends department, I see Frugal Scholar is back from a long summer’s hiatus. And by golly, Blogger is letting me comment there again…hallelujah, brothers & sisters! Check out the interesting idea for an olive oil scrub. I love that idea. Matter of fact, I think I’m going to go try it right now.

The Iron Gate on the Danube, on the Serbian-Romanian border. Denis Barthel. GNU Free Documentation License.