This stuff has gotta stop.

A new doc’s appointment coming up on Friday, I’m wrapping up a blood pressure/events diary by way of discussing the blood pressure conundrum. Fack, what a Pain in the Tuchus, caps and lower-case.

By way of trying to infuse some sense into ream after ream after ream of brain-banging numbers, I took it upon my little self to mark each arguably hypertensive event with a tag relating to any concomitant circumstances or emotional states that might be relevant:

That’s about it. There really aren’t that many things that unnerve my cardiovascular system. but I guess those six are quite enough.

So today I’m organizing 575 entries (yes, you did read that right!) and it strikes me that I’ve entered “Annoyance” an awful lot. Like…oh…at least once a day. Often lots more than once a day.

Indeed. If you believe this little transcript of miseries, I am “annoyed” every single goddamn minute of my life.

Well, “annoyance” runs a fairly wide gamut: from mildly peeved (more junk mail in the postbox!) to irritated (Trump news, computer hassles, driving the homicidal roads of Phoenix) to freaking enraged (Cox makes a hash of things, Mac crashes and loses a sh!tload of data). But what that’s saying is that I traverse a spectrum of emotion that runs from ever so slightly ruffled to mad as a cat…every day. Every freaking day.

No wonder my blood pressure hovers near the ceiling.

And therein lies the issue: That, whatever it is, has gotta stop!

Exactly how one makes a steadily flowing tide of rage come to a stop escapes me. Really: I have no idea. But one expects that recognizing something makes it possible to deal with something.

Ah, yes, Today: it began with five hours of wrestling with intransigent computer hardware. An hour on the phone with a Cox tech (Cox has recently taken a page out of Apple’s book and now, mirabilis! offers a service that allows you to talk with a tech in real time). After much thrashing around, he fixed one issue (re-connected the [ever-annoying…] new MacBook to the [unhappy, cranky] Brother printer. Then realized, in short order, that the wi-fi card on the stegosaurus-vintage Mac had crashed.

Finally get breakfast and a couple cups of coffee along about 11 a.m.

Feed the dogs and feed myself. Post a new chapter from The Complete Writer at Plain & Simple Press. Realize it’s a bit too bloggish and…come to think of it, out of date. Rewrite it. Add new material, expanding its scope a bit. But find myself a bit too tired after the morning’s marathon Annoyance to go on at much length.

Decide to take a full half-hour (it expands to 40 minutes) to unwind preparatory to running the last BP measure I intend to commit, by way of finishing off this diary to present to her Doc-hood. Use the time to draft a little bit of the Ella story. Don’t get far. 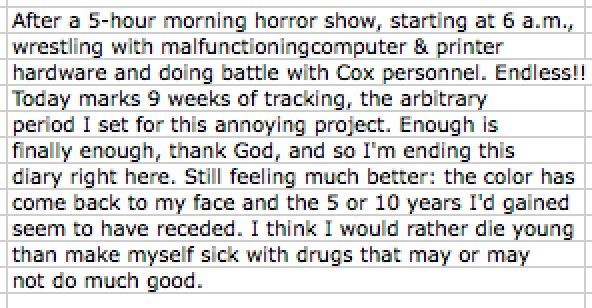 Consume afternoon in cleaning up the data I’ve collected and trying to make sense of it, the morning having been blown with trying to make the computers and Internet connection work.

My friend calls to say that her mother has passed. Not unexpected — she was very elderly and not well. But sad. We agree that she should refrain from going to the planned concert this weekend…especially since it happens to fall on her sister’s birthday.

Out the door like a rocket, running late as usual.

Naturally, Missouri Road is blocked down to one-lane-in-both-directions, preparatory to new lane-painting. Not a paint truck in sight, as far as the human eye can see. Takes for fuckin-ever to get through that mess, but fortunately I left not quite so late as it felt. Get to the Apple store right on time.

There we learn that the MacBook cannot be fixed, because Apple considers a nine-year-old computer too superannuated to be bothered with. But given that I dropped it and dented one corner of the thing pretty badly and yet it STILL kept on running, I can’t complain.

Peruse Apple’s present offerings and realize that really…seriously…I should have bought a MacBook Air. It would have cost a fraction of what this MacBook Pro cost; it has enough memory and power to do the main jobs I do; it lacks the annoying touchbar; and its keyboard has not yet been stupidized.

Peruse the iPhones. Learn how to get ahold of refurbished versions and how to recognize the ones that probably will run for a few years. Think the price, even on the second-hand models, is stupidly obscenely fukkin fulminating outrageous.

Drift out of the Apple store. Drift through Saks, check out the Eileen Fisher racks, miss my crazy friend who could spend more money just thinking about it than I can spend working at it. We loved to shop there, which was…crazy, where both of us were concerned. Once in her presence I bought a pile of Eileen’s I couldn’t afford. Took them home. Looked at them and thought holeee shit i can’t afford this. Dropped them back in the bags and returned them.

A week later, happened to pass through the store again, only to find a gigantic end-of-season sale going on. Bought back all the stuff I’d returned, 30% to 50% off. 😀 My friend never knew.

Hit the road at the height of rush hour. Remember not to turn onto Missouri. This leaves just one option: drive up to 24th and go west on Glendale. Traffic is bumper-to-bumper-to-bumper.

But manage to dodge left across oncoming traffic into the (ever-crowded) Sprouts parking lot. Dart in and grab a few things, among the Pomí tomatoes that you can no longer buy anyplace else in town, not even at AJ’s, not even at Fry’s.

Up 16th to Northern, hit a ribbon-shaped parking lot. Nothin’ going on, except a cop helicopter buzzing a ’hood to the north. Just traffic. Traffic. Traffic.

Feed the dogs. Myself, too tired to eat.

Here’s a beautiful piece we’re singing during Holy Week, one of my favorites. Said a commenter on YouTube:

I felt so distressed this morning and found this lovely piece of music, and it healed my mind. Music like this is so healing. Thanks for posting. Very grateful.