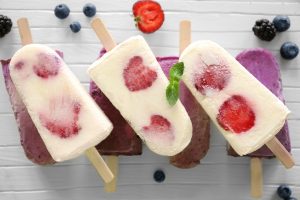 God’s hand reaching down out of the clouds and lifting you Heavenward?

Any and all of those would be good. Very good. But really, when you come right down to it, nothing helps like…yes...JUNK FOOD.

Yes. Yes, you’re right. It’s extremely bad for you. But the heck with that noise. Bad as it may be for you, it does make you feel a great deal less crabby.

And here we have one of the finest, most effective, and most delicious comfort food(oid)s ever invented by the human mind: Coconut paletas.

These are treats that faintly resemble a Klondike Bar, only far more delicious and lacking the chocolate. And you can easily make them at home, because, though they look like they’re made of ice cream they’re not. They’re easy and cheap to whip up, and nothing could be more bad for you. Which is to say, nothing could be better for your mood.

A paleta is very much like a popsicle. Some of them are indeed popsicle-like: the strawberry varieties, for example. Some of them are a little more exotic. Among these is the coconut paleta, a treat made of sugar plus coconut stuff plus (sometimes) nuts plus…oh what the heck! Throw in some more sugar, because you deserve it!

Here’s what you need to make them:

Typically, the nuts are almonds, but it doesn’t matter. I’ve been using a fistful of mixed nuts. Pecans would be great. Walnuts would, too. Or pistachios. Whatever.

You’ll need something to mix this stuff up with: a wire whip works well. Or a fork. Or a spoon. Maybe an electric mixer, if you want to go to that much trouble. If you’re adding nuts, a small blender to chop them up is highly desirable.

So, in a medium-size mixing bowl, combine the coconut products, the cream, and the sugar. Finely chop the nuts and toss them in, too. Mix well, so the batter is nice and smooth and non-lumpy.

Fill your popsicle molds with this batter, insert the sticks or holders, secure them upright in their stand, and place them in the freezer. Go away for awhile.

That’s it. In a few hours, you’ll have a bunch of icy sweet treats that are guaranteed to cool your temper enough to stop the steam from shooting out your ears.

It’s all, every variety of it, so much better than a sick dog; locked-down veterinarians; a busted car; idiots blasting fireworks until three in the morning, starting in the first week of December; stoners drag racing up and down Conduit of Blight Blvd. and across Gangbanger’s Way through the wee hours; a raging plague; a cop helicopter rattling your windowpanes for half an hour; computer do-dads that you do not know how to use and do not want to know how to use; frost on the palm tree; constant discomfort from some chronic ailment you never heard of before; busted plumbing; busted-out drywall; parades of (presumably contagious) workmen traipsing through the house; a glitch in your email system that takes an Apple service manager to figure out and fix (and that, only by guess and b’gawd); a pool dude who feeds your sick dog Milk Bones….

Oh WTF… She’s refused to eat anything else for the better part of a week. Maybe Milk Bones have enough calories to keep her alive for another few hours.

2 thoughts on “Comfort Food(oid) for Times of Stress”