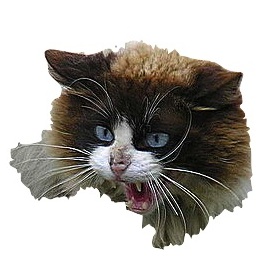 Ever feel out of sorts…like…all day? It’s what my father used to call “getting up on the wrong side of the bed.” {gronk!} Irrationally crabby, cranky, and…mad as a cat.

That’s my State of Mind of the Day.

What has brought about this predicament?

Mostly (I suspect) being forced to jump through a series of expensive hoops to replace the scratched lenses in my glasses, gouged up when I tripped over a busted chunk of sidewalk and fell on my face, in the dark.The insult of having to buy new prescription lenses is much exaggerated by the longstanding US law that requires prescription lens users to get new eye exams and new lenses — to the tune of a couple hundred bucks and two to four hours of their time — every year. It’s been about two months over a year since I bought the excellent glasses I now have and that I have exactly zero desire to replace.

And it absolutely positively infuriates me that I’m being made to spend several hundred bucks on an unnecessary eye exam for the privilege of spending 60 bucks on a new pair of lenses. This is just fuckin’ stupid and insulting. Let ME decide when I need a new vision exam…puh-leeeze!

But of course, if we all did that, our behavior would not enrich anyone, would it?

So today I had to trudge to Costco, sit around waiting to be seen (a half-hour or so after the appointed hour), dork my way through another eye exam, then line up at the glasses counter and present the resulting totally unnecessary, utterly redundant prescription to the unhappy counter attendant, fork over my glasses, and wait a week or ten days to get a new pair that works.

Just pisses me off no end.

You should be able to call on the phone, say, “Hey! I need a new pair of glasses in that prescription you have in your records!” and get it. Sure, let the optician say “Wellll, but don’t you think you really should, if you have any sense at all, update your prescription?” And leave it to the customer to decide yea or nay.

So that set me off on the wrong foot. The annoyed foot.

Moving on, this morning dawned clear with mare’s tails… The latter usually a clue to incoming rain. A dark streak of smoke blackened the western sky — fire, apparently. Brushfire? House fire? Another business burning down?

By midday the sky was gray, and it still is. Apparently rain is unlikely. But it’s cold and it’s glum.

On the way home from the Costco Optical Scam, I stopped by the (legal! keep your hat on!) marijuana dealer’s place, located in the Home Depot’s parking lot. Naturally they no longer carry the CBD cream that has helped so surprisingly with the spavined paw and arm. The clerk kept trying to sell me stuff with menthol in it. Something about “I simply hate the odor of menthol!” just does NOT register with some people. Neither does “I don’t want to smell like (fill in the blank: menthol, lavender, rosemary, or effin’ Nuit de Paris.) Grrrrrrr…

If they had what I want, I couldn’t figure it out, so left empty-handed. And annoyed.

Moving on…the cleaning lady was still here by the time I got home, of course. By now it was after 1 p.m.. Having enjoyed a light breakfast around 7 a.m., I was damn hungry and did not want anyone underfoot while I was trying to cook a full meal.

So opted the meal in favor of a few slices of avocado, a couple slices of cheese, and a slice of bread. Ugh.

It’s after 4 p.m. She just strolled out the door, leaving in her wake in incredibly, UNBELIEVABLY clean house. How she does that escapes me.

So one can’t feel too, toooo crabby…except on reflecting that one would like to have a nap (having as usual not slept well at night) and one would really, truly like not to get ripped off a little extra when one’s glasses get scratched up through no fault of one’s own.

Thus one could argue that I yam indeed irrationally crabby.

Ohhhhh…to frost the cookies, I forgot that tonight is choir practice. Can I possibly, possibly squeeze in a couple hours’ nap between now and 7 p.m.?????