In an odd way, the foreclosure of Dave’s Used Car Lot, Marina, and Weed Arboretum amounts to a kind of foreclosure for the neighbors, too. There’s the obvious effect that when the lender unloads Dave’s house at a bargain-basement price, our property values will drop into the basement, too. Actually, they were already headed for the basement: now they’ll just ride on down to the sub-basement without getting off the elevator.

But there’s a much larger effect: Dave has been financially distressed since he divorced a year or so ago, and his emotional depression has shown in a sharp increase in his native slovenliness. He never was into anything that might be called “pride of ownership,” but over the past year, his normally trashy lot has become a real eyesore. Also, as it develops, Dave has been cultivating a public health hazard. 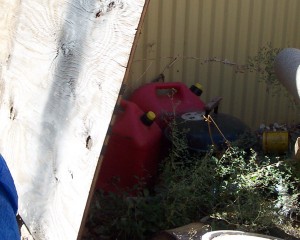 SDXB came by this morning, and out of curiosity we visited the abandoned house. Both gates into the backyard, from the front and from the alley, are unlocked and easy to open. The backyard is chuckablock full of debris, old chemicals, bottles of pool acid, old batteries, and stuff highly hazardous to kids. We have, for example, these fine gasoline cans, located behind an open tool shed replete with bottles of old insecticides.

Mighty nice, eh? How would you like your kids to get into this stuff?

Ah, yes. Then we have the issue of the swimming pool. The pool has been drained; evidently has stood empty for quite some time. Though it’s enclosed within a wrought-iron fence, it’s easy to enter: the fencing ends at a screened porch whose two exterior doors have been ripped off, creating a nice corridor through which the curious may pass without obstruction.

Once you’ve passed through the aluminum structure, where, by the way, you’ll find a heavy-duty battery charger with enough juice to flash off big sparks and give you (or the kiddies) one heck of a zap, you come to this: 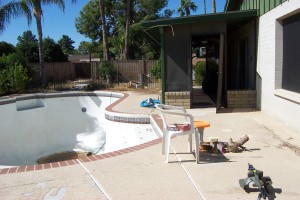 And at the bottom of this concrete-lined hole in the ground you find a collection of lost toys marinating in a fine little mosquito-breeding Okeechobee Swamp:

It explains where all the nasty little biters have been coming from for the past several seasons: straight from casa David to su casa.

Maricopa County, where we have been dwelling cheek-by-jowl with Dave, has a growing problem with West Nile virus, a disease carried by mosquitoes. And as we know, mosquitoes breed joyfully in standing water. Every year more and more people come down with this ailment, and every year we read of several deaths related to it. The most vulnerable to serious complications are the elderly.

Dave’s next-door neighbors are in their nineties.

I am in my sixties; many of the locals who have died of this disease were between 60 and 65. The most recent death I’ve read about was of a man in his 80s. My house and yard have been overrun with mosquitoes for months. This, evidently, is where they’ve been coming from. My house is clear across the street—imagine what the mosquito swarms have been like for the old folks next door to Dave!

After you’ve enjoyed the scenic view, don’t miss Dave’s old battery collection on your way out:

Maybe an enterprising kid can get a little extra mileage out of one or more of them, using the handy-dandy battery charger left on the back porch.

And as we say good-bye to Dave’s Used Car Lot, Marina, and Weed Arboretum, we pass by the famous Weed Haystack, still gracing the front driveway as it has from time almost immemorial:

Always visible from the street and from front yards in all directions, this fine landmark remains as a symbol of everything Dave has done for his friends and neighbors in Royal Oaks.

Long before Dave’s lender foreclosed on him, Dave foreclosed on the neighbors. He foreclosed on our property values, on our safety, and on our health. I guess we have to say thank you to the irresponsible and unethical lenders who forked out $320,000 in loans against a property worth about half that and handed it over to a recently divorced man who hasn’t held a regular job in years. If they hadn’t sunk him over his head in debt, Dave and his pet mosquitoes would have stayed in that house forever.

8 thoughts on “Foreclosing on the neighbors”