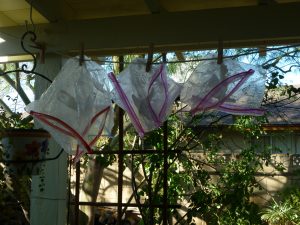 As you know, SDXB is the King of Cheap: this is a guy who can live comfortably on practically nothing. One of his habits — one that used to abhor me no end — is washing out plastic baggies and using them again.

SDXB used to make me crazy by insisting on washing every baggie and leaving them around the sink and drainboard to dry. At one point I suggested we should run the things through the washing machine. But of course he poo-poo’d that idea — partly because it came from the Little Woman…but better yet, because he was right; running those cheapie baggies through the wash would make the precious things fall apart forthwith.

HowEVER….  The fancy zippered things are another critter altogether from the old ones. You can wash the things in a washer — many times. They do not wear out easily. And y’know, if one of these things costs three times as much as one with no zipper gadget on it but you can re-use it twice (1 use, 2 uses, 3 uses), then you actually pay the same for it as you do for the cheapie bag. Use it more than three times, and it costs significantly less than one cheaper baggie.

One FaM reader, back in the day when FaM was more devotedly a personal-finance site, remarked that said procedure sounded fine for veggies, fruit, and dry stuff, but (gasp, shudder!!) she would NEVER reuse a bag that had ever held raw meat.

Really? So you never eat off a dish that has held a piece of raw meat, preparatory to tossing it on the grill or the frying pan? {chortle!} Betcha do!

To be sure each baggie is clean, first I squirt a little dish detergent in it, add some water, and squirchel it around so as to massage soap and warm water all over the inside. Then let it sit for awhile, until you get around to washing dishes. Then rinse out the soap, turn the baggie inside out, and set it aside until you have enough to make it worth running the washer. A small basket is convenient for holding your stash.

When you have ten or twenty of the things, drop them in the washer — leaving them inside out. Add a small amount of clothes detergent, set the washer on warm and at the smallest load size, and let ’er rip!

Since I have a washing machine that actually works now, this process really does get the baggies clean, and without wrecking them. Whether one of the horrid front- or top-loading “high efficiency” washers would do the job, I do not know. Of course, those washers being what they are, it would take forever and a day to run the the collected baggies through a wash cycle — but I’d guess if you used the shortest cycle offered (what? only an hour and a half? 😀 ) and selected the gentlest cycle you could extract from the thing, it would probably wash them well enough.

Then either hang them on a line (if you have such a thing) or prop them open on the sink grid or a dish drainer to air-dry. Et voilà! That many baggies that you don’t have to buy (or throw in the landfill) for awhile longer.