By golly, the thing DOES work. Yesterday I took it into my fevered brain to subject the ballyhooed Speed Queen washer to the acid test: tossed a vast  mound of dirty clothes into the thing. That would be as follows:

This pile of debris stuffed the machine’s tub right up to the top. Half-expecting the worst, I turned it on and ran away.

In 30 minutes flat, the cycle had run through.

A fair amount of soap suds resided in the utility sink, though. (In this house, the drain attachment, rather than plugging directly into the sewer drain, hooks over the side of the sink and water runs off down the sink’s drain.) No question: I’ve been using too much of that HE detergent, even though I took a Sharpie and traced a bright green line all the way around the Tide bottle’s cap at the “medium-load” mark.

So I ran it through the “rinse” cycle.

Understand: this means those jeans have gone through FOUR cycles of sloshing around. If they had gone through even ONE cycle in the accursed Samsung — by “they” in a Samsung I mean two pair, not four pair, not even one pair plus a few shirts and camis — they would come out looking like…oh yes, let us never forget it, THIS: 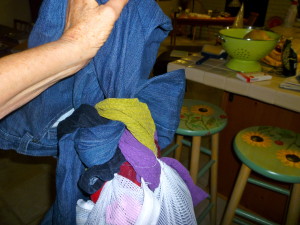 With profound trepidation, I reached into the washer. And what should come out but…clothes.

Unbraided, untangled, freaking CLEAN clothes. One item at a time. Nary a single piece was twisted or knotted onto another piece. They all came out pretty well unwrinkled, too. Nothing absolutely had to be run through the dryer to beat the wrinkles out. A quick shake or two, and even the knit tops and cotton T-shirts could go straight onto a hanger to dry.

Huh. Think of that. 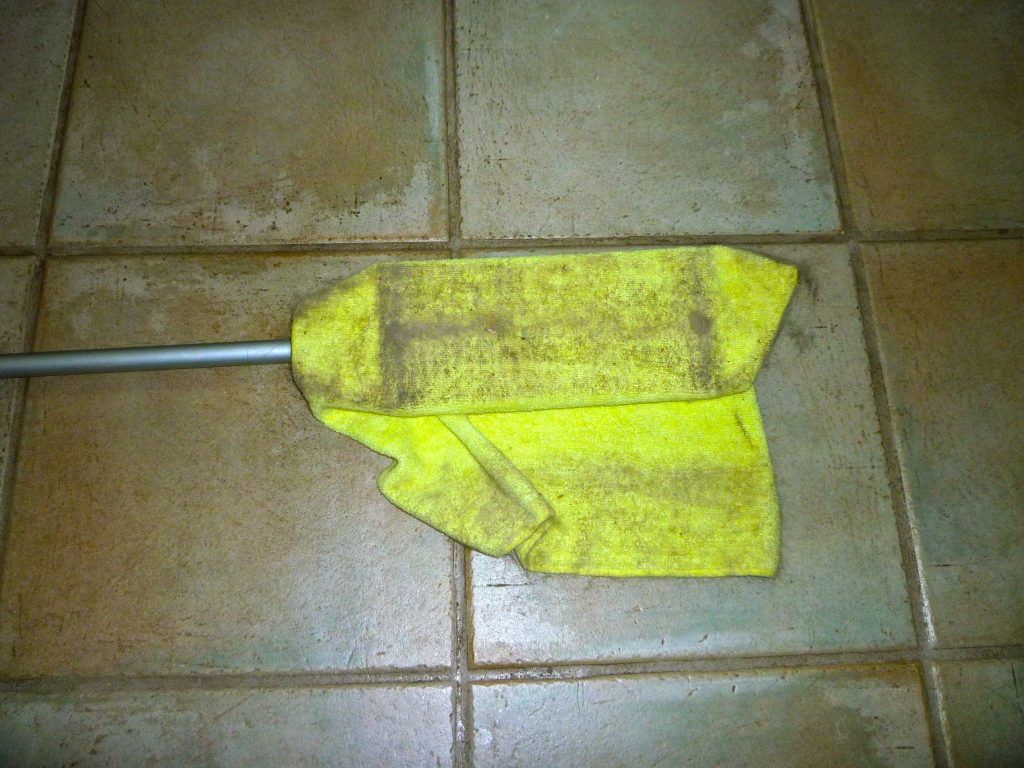 Next: ran ten days’ worth of microfiber rags through a “heavy” cycle. These, used once a day to swiffer up 1868 square feet of tilework, were clogged — CLOGGED, I tell you! — with dog hair and dust.

Now, from this experiment, I must admit, I expected nothing. The image doesn’t show all the fine, vacuum-cleaner-choking dog hair collected by the microfiber-swiffing strategy, but trust me: only the gods themselves could get that stuff out of a Costco microfiber rag.

To avoid introducing gritty sand into the washer (tracked into the house by me and by the dawgs), I did soak these rags in the scrub bucket while the first load of wash was running, and then sloshed each one briefly and wrung it out before tossing it into the Speed Queen. And also by way of shaking out dog hair, I did run them through the dryer.

The result? Defies belief! Not only were the rags dog-hair free — completely dog-hair free! — they were cleaner than they’ve been since they were new. A couple of the older specimens had turned permanently gray. No amount of washing would get out the fully absorbed grime. When I pulled them out of the dryer this morning, I found that every one of them is yellow! Even the rubbed-in, soaked-in, scoured-in permanent gray dirt washed out.

So: I’m going to have to train myself to use HE detergent properly. You actually can buy old-fashioned Wisk through Amazon — Wisk used to be the best of the detergents available to ordinary consumers, followed closely by Tide. But Speed Queen urges consumers to go ahead and use the HE stuff. Just don’t…overdo it. Apparently I remain excessively enthusiastic about detergent. 😀

So the question is, just exactly how environmentally immoral is this machine?

True, it does fill the tub all the way up to the top when you set it to wash a large load. But…are we talking about something like the wondrous environmentally correct toilets that supposedly used 1/3 the amount of water of a real toilet but that had to be flushed three times to do the job?

I got almost two weeks’ worth of laundry into one load. To wash four pairs of bluejeans in the Samsung, I would have had to run them through two pair at a time — otherwise I’d be pulling out a braid of denim that would take ten or fifteen minutes to untangle. Nor could I put anything else into the Samsung with them. Anything that had a sleeve or a bra strap, when combined with a pair of pants, would end up in a braid. So that single load in the Speed Queen did three Samsung loads.

Additionally, in order to get the clothes even moderately clean with the Samsung, I had to prewash them by hand in a scrub bucket. That required pouring several gallons of hot water into the bucket and adding detergent. So we not only had to run three loads of water using the largest cycle the Samsung offered (the “bedding” cycle would almost get a small load of clothing wet), we had three bucketsful of water, plus the extra detergent needed for the hand-wash maneuver — to wash what can be done well in one Speed Queen load.

If I didn’t feel inclined to wash the clothes by hand before running them through the Samsung, I would still need to fill the scrub bucket and pour water into the damned washer, to trick the thing into releasing enough water into the tub to sort of get the clothes clean. Or even to get them wet all over.

So…to get the same amount of laundry done, I’m willing to estimate I was using at least as much water as one Speed Queen load — only having to do it in three or four loads, each of which consumed an hour and ten minutes’ worth of electricity to run.

I’ll bet that’s not a wash. Dollars to donuts, the Speed Queen wins.

If You’d Asked Me…
High Inefficiency: Washers & Rx Plans
A Thousand Curses on “Energy-Efficient” Appliances
How to Wash Clothes in a Samsung Washer
How to Get Sand Out of a Top-Loading HE Washer
Samsung Washers: Told You So…
Appliance Hell/Appliance Heaven
Rumination: Of Appliances and Politics