Here in urban Arizona, we homeowners have something called “desert landscaping.” This is some Easterner’s idea of an approximation of what the Sonoran Desert looks like: a load of gravel spread over the yard and punctuated with a few cacti, a palm tree or two, and an ocotillo. Since the cost of watering a lawn easily exceeds a summer air-conditioning bill (which can be whopping!), this type of xeriscaping is cost-effective, if not what you’d call aesthetically awe-inspiring. 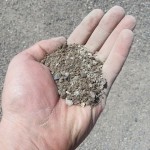 An alternative to the ugly, footpad-piercing gravel is a product called “quarter-minus.” This stuff appears to be a by-product of sand-and-gravel operations: it’s a blend of finely crushed granite and gritty stuff that looks a lot like sand. Quarter-minus has three advantages: piled on deep enough, it inhibits weed growth; it vaguely resembles the desert floor (sure does that better than gravel, anyway); and after it’s been watered or rained on a few times, it packs down into a hard surface that your dogs can walk around on. This latter obviates their getting mud all over their feet and tracking it into the house.

“Mud” in Arizona is not your ordinary East-Coast mud. The soil here has a lot of clay — in its extreme form, it creates a kind of hardpan called caliche. This stuff is sticky. When the dog tracks regular wet dirt into the kitchen, the stuff adheres to the tile flooring like paint. You literally have to get down on hands and knees and scour it off. It will not wipe up with a rag or paper towel — you have to use a scrub brush or one of those sponges with a scouring pad on the back.

This is a good reason to put quarter-minus in the back yard. If you’re a dog owner, that is. And if your dog is, say, NOT a corgi puppy.

Ruby the Corgi Puppy, being a high-energy sort of soul, is given to chasing around the yard like a rocket with Cassie. And Cassie, being a corgi herself, is also a bit of a rocket. They’ve built a race track around one of the orange trees. Where they’ve established their route, the quarter-minus is churned up and loose. And that means whenever it gets wet, they track a film of fine sand into the kitchen.

This vacuums up, but it’s a nuisance. So I put a little bathroom rug in front of the kitchen door, which works well to shake off and collect the sand.

The other day one of the dogs wuffed on the rug, so I put it in the accursed Samsung washer. And it came out just fine, since it’s flat. Flat things are the only things the Samsung will run through an entire wash cycle without disgorging them in the form of braids.

A few days later, I decided to toss a pair of jeans that I’d worn just a couple of hours into the rinse-&-spin cycle, knowing this would shake out the wrinkles and give me another wearing before I actually had to wash the things by hand, as I now have to wash everything that’s not flat by hand. Twenty minutes later, I come back to retrieve the pants and…WH-A-A-A?????

Sand has run out into the utility sink, into which the used washer water drains, and left a structure that looks like a sand bar on the bottom of it.

Not only that, but the entire inside of the washer is full of sand.

I get out the shop vac and vacuum out the sand, running the nozzle not only over the bottom but all over the tub’s walls, hoping to suck out whatever sand is caught in the little holes that perforate the tub’s side from top to bottom. I fill a scrub bucket with cold water and attempt to rinse the sand out of my jeans.

Then I run the pants through the washer again, only on a full “Quick Wash” cycle. In the wondrous world of HE washers, “quick” means 45 minutes. I figure an endless slosh like this should knock the remaining sand out of the jeans and rinse it out of the washer.

Three-quarters of an hour later…

The jeans are still full of sand, and so is the washer.

I wipe out the washer with a microfiber rag, put the jeans to soak with some detergent in a bucketful of water and run the “Bedding” cycle with the machine empty. “Bedding” is the only cycle that causes the Samsung to dispense enough water to actually clean a load of wash, more or less. The “Bedding” cycle takes an hour and ten minutes to run. Maybe, I hope, that much water slopping around that long will be enough to wash the sand out.

I wipe down the inside of the washer tub again, rinse out the soapy jeans in the sink, drop them back into the washer, and run “Bedding” again.

Have you counted up the amount of time we’re at now? One rinse, two “quick” washes, two bedding cycles: that adds up to 4.17 hours of run time. That doesn’t count the time spent vacuuming and wiping down the washer and manually rinsing sand out of the clothing.

The jeans come out again with sand in them, but less of it: I’m able to shake most of it out in the backyard.

The inside of the washer is still coated with sand. YouTube’s repair dudes and DIY mavens suggest this is not a good state of affairs: sand in the pump will, of course, grind up its innards.

Apparently I’m going to be  buying another new washer sooner than expected. Hope I can find a cheaper one with a rinse-only cycle…

How to get this stuff out?

Now I raid the linen closet and haul out four large towels, one of them a gigantic Costco beach towel. These I dump into the washer with a generous slug of home-made fabric softener (hair conditioner diluted with water works as well as fabric softener and it doesn’t stink). Run it all through on “Bedding” again, the second-longest cycle the Samsung provides.

By the time the mountain of towels came out the second time, most of the sand was out of the washer. Not all of it, by any means. But most of it.

That’s 6.51 hours — almost seven hours of running the washer trying to get the sand out of it!

Holy mackerel! What would you do if you lived near a beach? Just keep buying new $1500 washers every six months or so? Learn to replace the pump yourself and keep a lifetime supply of the things in the garage?