Dear GOD how I hate these accursed faceless social media platforms, with their horrid “help” pages that run you around and around and around circles and don’t answer your question and seem to have been designed solely to frustrate users.

It’s been a while since I visited Goodreads. I need to get back into my author page, update my booklist, and start a blog. But GR has decided I’m “not a member,” even though it seems to recognize  me, sort of.

It wanted a password. I entered the pw I have in my records. It rejected that password. I clicked “forgot password.” It emailed a link to reset the password. I jumped through that hoop. When I tried to get in, it ran me RIGHT BACK TO THE SAME HOOP JUMP!

It asks me to enter a password, flicks me the electronic finger, and then tells me to enter my email and if it approves it will send me a link. I jump through that hoop again…with the same result. 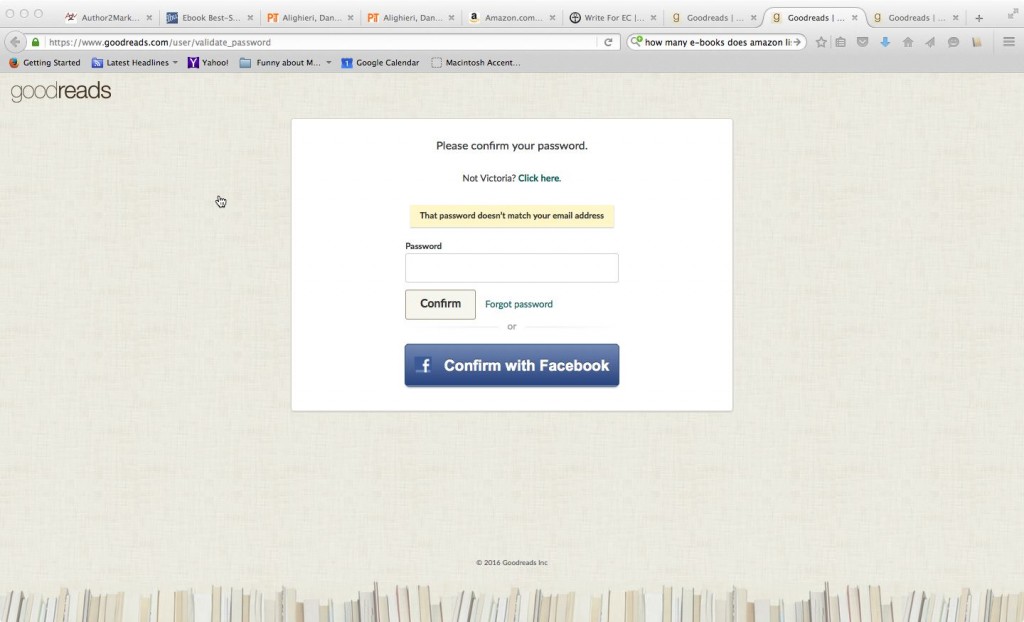 FACEBOOK? Why on earth would I want Facebook to have my Goodreads credentials or to “confirm” that I’m me or even to know that I’m on Goodreads?

It apparently is a choice (of sorts): either enter a password or “confirm” (whatever that means) with Facebook.

Over the past months, I’ve put off going back to Goodreads, even though it’s supposedly a key marketing tool, because I got so mad the first time I signed in there that my password is a near-obscenity. Because three of my books — published through real publishers, not through Amazon — came out under variants of my full name, they won’t let me post the Racy Books at my Goodreads site, because they’re published under the “Roberta Stuart” pseudonym. None of my bylines are pseudonyms.

My parents gave me a clunky, old-fashioned, ugly first name that made me the target of bullying throughout grade school. When we came back to the states, I started using a nickname based on my middle name. As a journalist, this was my standard byline, and The Essential Feature, a journalism textbook, naturally was published under that byline. But I had used my full formal name for my first book: a historical biography that grew out of my Ph.D. dissertation.

The first business partner I had, back in the day, was a marketing & PR guy of some skill. He felt I should go by the full, more formal-sounding middle name, which is also stuffy and stilted but at least most people can pronounce and spell it. So my third book had that name, and I still use it for business.

Amazon and its purchased underling Goodreads have decreed that a legal name consisting of three fungible parts — a first name, a middle name, and a last name — is actually three pseudonyms! No argument to the contrary is brooked.

That means, of course, that I can’t use Goodreads to market the steady stream of books we planned to emit — and have emitted — through Camptown Races Press! Goodreads had already glommed what it announced were “pseudonyms” from the books Columbia, Folger, and William Morrow had posted on Amazon years ago and so would not allow me to add a real pseudonym.

When I protested this, a CSR came back with an elaborate workaround. It was so complicated and promised to be such a vast time-suck that I was put off and let the whole project drop. Then I ended up in the operating room.

The medical nightmare was such a distraction that it was all I could do to try to meet our original goal of publishing 80 to 100 books within the year. Anything that was aversive — or that had an aversive element — got tabled. And the most solidly tabled of those was Goodreads, primarily because the first experience with it started off in full aversive mode.

Much as I dislike toilet-paper-style social media platforms, I did take up Twitter to a lesser extent Facebook. Facebook is inhabited by my coreligionists, whom I would rather not proselytize with Racy Books. So Twitter was pretty much it.

Magazines, books: I know why people read them, and I know how to reach magazine and book readers. Blogs are to a  large degree similar: you can see a reason that a person might want to read a given blog. A blog is magazine-like in that it has an editorial voice, it usually has a specific topic or slant, and it has a relatively consistent publication schedule.

But an endless, gestalt flow of nonstop babble about…what? Trivia? Cat pictures? Kid photos? The latest house you sold? That plate of food you bought at Alice’s Restaurant? Why? What is the appeal?????

Social media of the Facebook/Twaddle/Google+/Goodreads variety seem to me more like small talk than like journalism. And I’m really not good at small talk.  Because it bores me, I lack the patience to engage it for very long or to come back for repeat engagements. It’s part of the Aspergery character of my personality: I don’t connect with people in that way.

So. I don’t know if I’ll ever get on Goodreads. And quite possibly don’t care.

Meanwhile, print copies of the cookbook have been flying out the door! It’s sold a few electronic copies on Amazon (why anyone would want an electronic device on a kitchen counter while water, olive oil, butter, and flour are floating around escapes me, what what the hey?). But I can barely keep up with the requests for hard copies.

So I’m thinking my real social medium may be Toastmasters. This would give me an opportunity to talk about writing and thence segue into mentioning my books. I’m pretty good at public speaking, after 20 years of teaching in a college classroom. But people I’ve met who’ve been to Toastmasters are really good at it. One woman who gave our writing group a presentation on public speaking was so skilled as to be downright gifted. She came across exactly like one of those people who give TED talks.

Maybe what I need is not to be parked in front of a computer poking useless messages into “social” media but out on the road, talking to live people face to face.