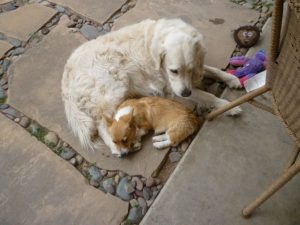 Well, lookee here! Suddenly I have a whole new dog!

Don’t know how Cassie was doing it, but she had the pup completely buffaloed. That would explain why Ruby took up residence under the toilet and, most of the time, refused to come out.

Ruby has decided it may be safe now to come out. And lo and behold! She’s turning into a dog. She’s no longer a stuffed animal into which you occasionally pour food.

One of the neighborhood kids lost a small rubber ball, which somehow made its way over the back wall. Ruby has been interested in it for awhile, but a) has had no clue what to do with a ball and b) the thing is too hard and heavy for her to maneuver even if she did know what to do with it.

Well. While I was running around town this morning, I picked up some tennis balls at the Fry’s.

It took her all of about 10 or 15 minutes to figure out what to do with one of them. Before long she was running after it and then fetching it back to me. Now she’s carried it out into the backyard.

I think she is going to become a Whole New Dog. By yesterday morning — before I went on the ball-search expedition — I’d noticed she was changing. She never used to sit on the doggy blanket beside my chair in the family room. Before, if I picked her up, brought her in there, and set her on the blanket, she’d get up and trot back to the toilet nest. But Tuesday evening she parked herself right at my side.

Yesterday I washed all the dog blankets and all the doggy bathroom-rug mats — started this project to get the sick-dog stink out of some of them, and then realized that washing out the Cassie perfume must help convince Ruby that Ruby can be Ruby now. Picked up an $8 bathroom rug, because a few of the remnants are past the age of laundering, and then put the re-usable ones into the washer. Ran them through two or three times with detergent and baking soda, in hopes of deodorizing them, though I’m sure that’s not 100% to the canine nose.

You know intellectually that dogs are strange. But sometimes they do amaze you.