Ruby, it appears, has noticed that Cassie has been gone for a long time. Does she suspect her pal — her packmate, her foster mother — is never coming back? Does she care?

Well, not speaking doggish, I don’t know whether she cares. I’d guess she probably notices.

But y’know, dogs are creatures of ego. By and large, the Self comes first,  unless an Other is aggressively in one’s face. And I am not very much in anyone’s face.

So far Ruby the Corgi seems unfazed. People claim that dogs grieve, but I have rarely found that to be the case, except possibly when M’hijito has gone out of town and left Charley here: when he’s not been playing with the corgis or scarfing down food, that dog will sit on the living-room floor near near the front door. When I had to put Walt the Greyhound down, I came home and sat on the floor — the very same floor — and wept for 15 minutes. Anna, a preternaturally empathetic and intelligent dog, came over and sat beside me. Little imagination would require a human to jump to the conclusion — probably a wrong conclusion — that she understood what was up and was mourning with me. But…shortly we got up and went about our business, dog and human.

Dogs seem to get over whatever mourning they do rather quickly.

Connie the Big-Rig Trucker was here for an hour or so. Ruby was thrilled to have her and climbed on the sofa to be sure she was never lonely. She wouldn’t think of climbing on the sofa when it’s just me! {sob!} 😀

When Connie left, Ruby went back to her nest under the toilet. But she decided to come out when I called her and suggested she might like to get back on the bed, which is a great deal warmer and softer than the tile bathroom floor.

The morning walk fell far short of a mile, because Ruby decided (well…and so did I) that we should go south instead of into the Richistans. This is a pleasant neighborhood but it requires traversing two cul-de-sacs and backtracking 2½ blocks to fabricate a full mile-long route. And about the time we got down to Feeder Street East/West I realized I’d forgotten to bring the poop bags. So we needed to move right along and get back to the Funny Farm quickly, before Her Dogship defiled one of the neighbor’s yards in full view of the occupant.

At the corner of Feeder East/West and Dowdy Money Lane stands Cassie’s favorite locale for defiling. This is a sprawling late mid-century modern ranch house that spreads out on a large corner lot. It has a bank of wide ceiling-to-floor picture windows along the front wall of the living room. In this house dwells a hound: a large white, tan, and black pointer. The hound keeps an eye on the world through said windows, and whenever it becomes aware of another dog, it springs into action, madly patrolling and craving to lunge through the barrier and pounce the canine intruder. Thus, said dog alerts its owner to the presence of incoming nuisances.

Cassie just loved that dog. Because…she loved to hunker down and take a dump right in front of it while it barked frantically! 😀 This meant she was often dumping in front of the owner, who of course quickly came to recognize the perps. This, to the human mind, was not very desirable, so I used to try to pass that house on the other side of the street, to avoid the persistent annoying performance.

LOL! At any rate, we did alert the pointer, but Ruby was more interested in trotting along than in making whatever statement Cassie used to make. Nevertheless, I cut the stroll fairly short because I didn’t want to leave any mounds on a neighbor’s yard. Figured to go out again this afternoon, only armed for bear (scat).

But…this afternoon it’s cold out there and raining and the wind is blowing. Not very inviting doggy-walk weather. So we’re re-ensconced atop the bed, with the heating pad again on the human’s back, spavined by days of lifting, carrying, and setting down a nearly inert 25-pound dog. 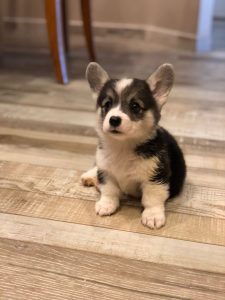 Zion Corgis is the breeder who produced Ruby. Is that not the cutest little gem you ever saw?

Problem is, she has a chronic, genetically mediated eye problem: dry eye. This will have to be expensively treated for the rest of her life. Looks like Lindsay is trying to get someone to take her on for ostensibly free. But it’s not exactly a give-away: she wants to be reimbursed for some of the medical bills she’s racked up on this pup, and…well…lemme tellya about extracting those prescription eyedrops every three or four months:

You can’t get that stuff from just any ordinary vet (which would be pricey enough). No. You have to go to a veterinary eye specialist, where you will be charged through the schnozzola for every refill.

This was the case when Anna the GerShep developed pannus in her old age. The eye vet announced that he had to re-examine the dog every time he dispensed permission to buy another expensive vial of eye meds. So chances are that $54 per prescription is just for the eyedrops…

😀 So what you’re really looking at there is the cutest walking vet bill you’ve ever seen.

M’hijito thinks I should speak up and try to get her. But if a retiree can’t afford an ordinary healthy dog (two thousand bucks? seriously? 😀 😀 😀 ), she sure can’t afford one that comes with a congenital eye problem requiring a specialist’s care.

Oh well. If one wants a walking vet bill, there’s always a fine German shepherd to be had: 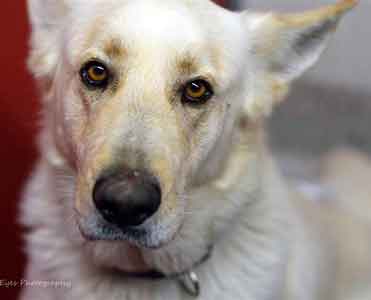 4 thoughts on “In the aftermath of Cassie”