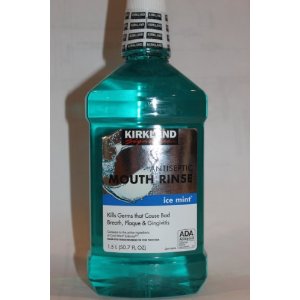 I’m sitting here with a bottle of Costco mouthwash on the desk. Broke a fingernail (again!) trying to get it open. The lid is sealed down with a fat strip of melted-on plastic, the name “Kirkland” stamped on it not once, not twice, but thirty times. Now I have to get up and haul this thing into the kitchen and dig out a knife to cut the damn plastic seal off.

In the kitchen, a box of anti-acid pills resides on the countertop. Need to take one of those this morning. To get at it, I have to dig a flat piece of cardboard out of a box, wherein a half-dozen horsepills are sealed between layers of plastic. Somehow I’m supposed to push a single pill through one of these plastic layers. This being a little on the difficult side (often, as in the case with allergy  pills, downright impossible), I’ll have to walk back into the office, dig a pair of scissors out of the desk drawer, carry them back to the kitchen, and cut open the damn plastic-&-cardboard packaging. While I’m at it, I’ll probably cut all of the pills out (it’s a 14-day supply), then walk back down the hall to the linen closet, scrounge out an empty bottle that does NOT have a goddamn adult-proof cap on it, carry it back to the kitchen, fill it with the pills, and throw out the box and the layers of pill “bubbles.” 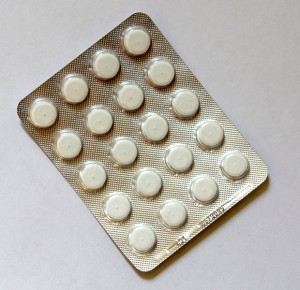 The box of horsepills came inside a larger box dispensed by Costco, which sells such things in lifetime supplies. To get at the three boxes I bought a year or so ago, I had to open a larger box, which was wrapped in plastic. So to get to ONE pill I’ve had to hack my way through one, two, three, FOUR layers of packaging. All of which made their way to the landfill, where as we speak they’re presumably blowing around in the wind or strangling small varmints.

While I’m in the kitchen, I’ll grab the bottle of topical anti-hot spot drops the vet gave me so I can apply it to the dog’s well-chewed leg. The plastic dropper bottle is encased inside a plastic prescription bottle, soon to join its friends in the landfill. Or not: that one doesn’t have a person-proof lid on it, so I may save it to hold pills gouged out of plastic-&-cardboard bubbles.

What, for the love of God, is the POINT?

Do you know how much all this trash is costing us? In dollars, that is, rather than in pure unalloyed annoyance?

People in the business will tell you that wrapping, rewrapping, and overwrapping every damn thing that gets dropped into a consumer’s  hands can run anywhere from 1% to 75% of the cost of the goods. And that doesn’t count the cost of designing the labels, and it most certainly does not count the cost of hauling the trash to the dump and storing it there. Nor, presumably, does it include the cost of the Bandaids needed to cover the knife, scissor, and sharp-plastic wounds incurred when customers try to hack free the goods they purchased.

Consider just the costs the packaging guys ’fess up to:

Why are we doing this? Not because consumers so love having to hack through layers of plastic and cardboard to get at what they bought.

Way back in 2003, Piper Jaffray reported,

Lovely. We cut our fingers, fume with frustration, fill our landfills with billions of pounds of unnecessary trash, have our taxes raised to maintain those landfills and run garbage trucks, and pay, on average, an extra 20% to 35% for food and necessaries so someone else can get filthy rich.

Apologists for this industry will tell you that individually plastic-wrapping cucumbers and packaging apples in clamshells are necessary to keep them from being damaged in shipping, and besides, you, the consumer, just love that packaging and won’t buy stuff without it.

Why do I think not? Why, indeed: I’ve been on this earth for rather more years than most, and during all that time produce and goods have been shipped, trained, trucked, and flown to market. [OHHH FOR GODSAKE! THIS DAMN MOUTHWASH BOTTLE HAS GOT A FLICKING CHILD-PROOF CAP ON IT! I CAN’T GET IT OPEN!!!!!!!]

Where were we? Yes. For most of those years, apples came in bins, not in consumer-proof clamshells. Pills came in bottles. Soda pop came in cans that you prized open with a churchkey. The same tool worked nicely to flip open a bottle of beer.

Actually, soda pop used to come as syrup. You added your own soda water to it, allowing you to decide on how strong or weak it would be.

No one ever heard of the pointless practice of sealing every single anti-acid and antibiotic and allergy pill individually inside sheets of plastic. Face cream and foundation came in bottles that let you access every last drop, not squirt containers that you can’t open and that don’t dispense all the product you paid for. Mouthwash came in jars whose lids you did not have to leave off (if you could ever get them off) when you put the jar back in the cupboard, so you could get at the product next time you wanted some of it.

The absence of unnecessary packaging didn’t seem to harm sales. People will buy what they need regardless of how it’s packaged or not packaged.

Some indications suggest that some consumers prefer not to buy overpackaged products. I certainly do, but not to such a degree that I won’t buy a product. Nor will I go out of my way to Sprouts or Whole Foods to find bulk products—even though in theory that’s one way to fight overpackaging. Burn more gas to buy less cardboard and plastic…

Here are some other strategies:

• Buy larger amounts in single containers. At Costco, for example, a lifetime supply of liquid laundry detergent comes in one plastic bottle, which appears to be made of less plastic than it would take to fabricate three bottles and lids.

• At the grocery store, select and purchase individual pieces of vegetables and fruits, rather than plastic bags full of onions, lemons, oranges, and the like.

• Buy a head of lettuce instead of a plastic box full of precut and prewashed lettuce (which you ought to wash anyway, to be safe…).

• Complain. Every Costco has a “suggestions” box. Whenever a product you want is overpackaged or challenging to break into, scribble a note on the way out, letting the management you object to that. Do the same at every retailer that foists over-packaged and consumer-proof products on you.

• Make them crazy. Whenever you encounter a package that requires a box cutter to open it, ask the cashier or customer service to open it. If they refuse to do it, tell them you can’t buy it because you can’t get it open. Amazingly, some stores actually arm their cashiers with box cutters, because quite a few customers report they can’t easily break into the consumer-proof packaging. If enough people demand extra help in opening clamshells and impenetrable plastic, retailers will send the word back to manufacturers.

• Before you leave the store, ask for help in opening child-proof and protect-you-from-yourself lids.

• Whenever possible, buy products sold in manageable packages instead of competing products that are overpackaged or consumer-proofed.

• Avoid products that are packaged in packets inside packages, such as certain snacks and over-the-counter drugs. Buy a bottle of loose generic allergy pills instead a packet of blister-packed brand-name pills—you’ll not only avoid hassle and vote with your dollars against overpackaging, you’ll save some money on the product.

• Urge local and national elected representatives to support legislation to limit overpackaging. (Good luck to that! The deep-pocketed packaging industry has a huge lobbying effort under way to put the kaibosh on any such schemes.)

• Shop with retailers that make some effort to limit overpackaging, such as Amazon and Walmart.

Resistance may be futile, but that’s no reason not to resist anyway. 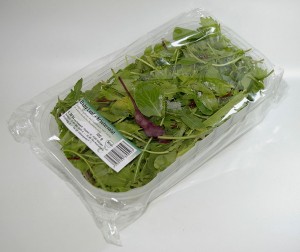 6 thoughts on “Overpackaged! How much is this debris costing us??”