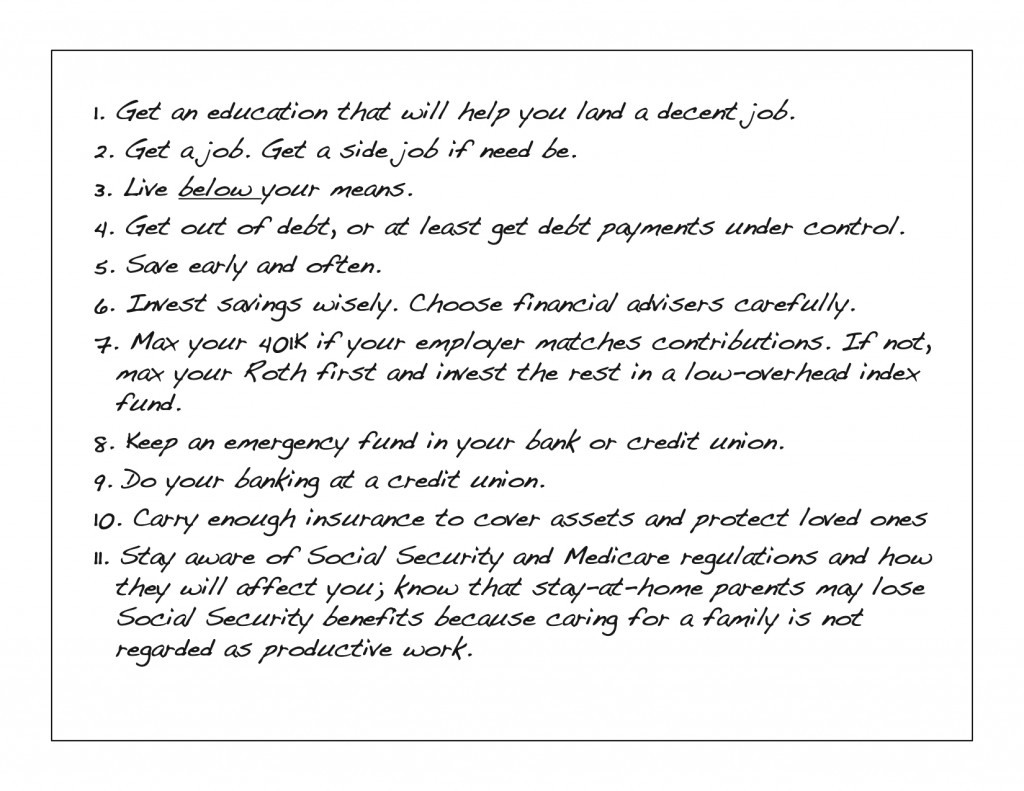 So I looked at the list of 11 points on the notecard that we’re told will contain all you need to know about personal finance and realized each of those would make a fine personal-finance post. 🙂 Voilà! Blogging on a notecard!

And that’s what I propose to do: 11 posts on personal finance, only with a twist. I’d like to actually think about these things, rather than just emit pragmatic advice. So we come to point #1: Get an education…that will help you get a job.

What that really means for most of us is not education. It means vocational training. There’s a difference.

Education furnishes your mind. It prepares you to meet the world with strong logical thinking skills, with depth of perception, and with some understanding of what came before you. It teaches you how to find out things you don’t know, and how to communicate what you do know in an effective way to a wide array of audiences.

Colleges and universities used to be sites of education. That has become less and less true, and indeed some universities seek to limit colleges of liberal arts, which dispense real education, by tacking on extra fees (essentially penalties) to students who major in those disciplines. The idea is to funnel as many students into more lucrative vocationally targeted majors as possible. And of course, because students mistakenly think “education” should get them a job, university administrators (and the legislators and donors who support them) measure “success” by the number of graduates who land decently paying jobs right out of school.

So…what happened? How did these things become conflated?

First off, businesses used to provide vocational training. If you went to work in a large corporation after you finished college, you arrived with a furnished mind but few job skills. You learned those as you worked. This was called “on-the-job training,” and it was considered to be, by far, a superior way to learn these skills than in the classroom.

Second, unions provided vocational training for those who went into the trades. You didn’t have to get a college degree to make a living wage. Here, too, you had on-the-job training, and you learned from journeymen tradesmen who knew how to do the job and could see that you learned how to do it, too.

Businesses simply abdicated this function. Corporations have foisted the task of vocational training onto higher education. And the killing of the unions has meant the demise of on-the-job training in the trades.

Third, the democratization of higher education, while in many ways a good thing, has dumbed-down the university’s role in education and accentuated its voc-ed role. In my opinion, that is not such a good thing: it creates the impression that hundreds of thousands of young people graduating with bachelor’s and even master’s degrees are “educated,” when in fact they are not. It also has devalued degrees in the liberal arts and the fine arts.

So, what’s the take-away here?

Go to college, yes. Get a two- or four-year degree. But think carefully about the subject matter. Choose something you can tolerate, but make sure it will open doors to the work world.

If I were to do it again, I would never major in French (B.A.) or English (M.A. and Ph.D.). I wanted an academic job, and today  it still might make sense to get a doctorate and aim for that kind of career. It might not, too: full-time faculty are steadily being replaced with underpaid part-time contractors. And academia, between you and me, is a crazy place to work. Too often it represents a fast track to a nervous breakdown, especially if you are a member of a minority group.

If I were young(ish) today and I seriously wanted an academic job (this would assume I didn’t know any better), I would do one of two things:

• Either get a degree in educational administration and go directly into an administrative position…
• Or get the doctorate in a discipline where universities are still hiring.

The second is highly problematic. First, many fields where you would think you could easily find entrée are not hiring. And second, the landscape shifts so fast that a discipline might be open when you start the Ph.D. program but closed by the time you finish the degree. STEM fields, for example, are not very promising for young academics anymore. Once I met a young woman fresh out of grad school who walked into an assistant professorship in accountancy at a six figure-salary. But I wouldn’t bet on that still being the case.

As for jobs in the real world? Get a degree — NOT a J.D.! — in a field will get you into a business or nonprofit and put you on the fast track to upper management. For example, an MBA in economics from an Ivy-League school or a public school with similar clout, such as Michigan or even UC Berkeley, can set you up for a career in banking or government. Keep the cost down by getting the undergraduate work out of the way in your state’s public university, and then aim high for graduate school.

And what if you’re silly enough to want to be educated? As in really educated educated?

Well, in four years you’ll have time to take at least some courses in history, art, language, and literature. They may fill some of your university’s gen-ed requirements. But you should also look at MOOCs: free or nearly free online courses that you can take in your own time. These are now offered by some very high-powered universities, including Stanford, Princeton, the Art Institute of Chicago, Oxford, the University of Michigan, UC Berkeley…and many more. You still can furnish your mind: you just have to do it yourself.