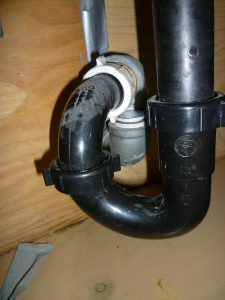 So…what happened after I showed Steven the (Avaricious) Plumber the door? As you may recall, when I couldn’t reach my regular guy, I’d called another local plumbing outfit which sent a gent around after making me wait upwards of five hours. This character complained that the plumbing under the sink (which has worked fine since I moved into this house 11 years ago) was an out-of-code mess, could not be roto-rooted, and needed to be disassembled and reassembled to clean it out. Proposed fee: $545.

Right. Sure. So I sent that jerk on his way. Posted a query on the Facebook neighborhood group’s page. Two neighbors recommended Maloney’s Plumbing, an outfit I’d never heard of. Gave them a call. And forthwith had a new fella in here.

The guy has got the drain working fine for the nonce. He removed the lever-operated drain plug — an invention whose appeal has always mystified me. A rubber plug I happen to have in hand works just fine and does not annoy, annoy, and annoy some more. He was honest. He was straightforward. He was astonishingly hard-working. And he was very clearly NOT trying to rip me off.

Yes, he did have to take Satan’s do-it-yourself pipework apart to do the job, and yes, it no doubt was a PITA, and yup, it took the poor guy half the afternoon.  But he didn’t try to persuade the Little Old Lady that the job couldn’t be done without disassembling the entire damn bathroom and rebuilding it from the foundation up. For an entire afternoon’s work, he charged me $326.

This, as opposed to the $525 (for starters) the first guy offered up — for starters. Hallelujah, brothers and sisters! Maloney’s Plumbing has got a new customer for life…or at least for as long as they treat me fairly.

Soooo… When the dust settles from this damned tooth fiasco, first thing that happens next is I’m hiring those folks to install plumbing to code under that damn sink.