Once again, here we are in the dead of July and it’s cool enough to shut off the A.C.! A miracle! Well…a fairly steamy miracle for most of the day. A fairly flamboyant rain storm passed to the south of us—probably dropped a fair amount of rain and hail on Mr. and Mrs. Accountability, who live off in that direction. All day long the rain was trying to work itself up into a storm, despite 90-degree temperatures. By midafternoon the air was so wet it felt like it was going to start raining inside the house! 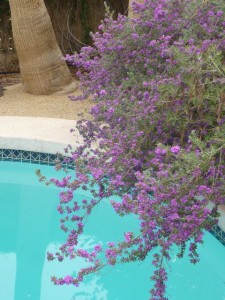 Each day I’ve been trying to to an hour or so of physical work in the yard. One has to get started very, very early to pull that off without expiring of heat stroke, so it was up at 5:30 to start pruning the Texas sage whose limbs have grown down into the pool.

It’s been slowly going off the deep end (heh! literally), but I’ve let it grow because it’s kind of pretty, with its blossom-laden branches curving into the water. But as a practical matter, it’s not good for the pool water. So it was past time to trim it up.

And that was quite a job. The problem was, I couldn’t reach all its branches from the deck. To get the whole job done, I had to get into the pool with the big nippers in hand and cut limbs from beneath…a trick when your feet don’t reach the bottom and you can’t get any purchase.

Cut out a wheelbarrow full of feral growth. I was worried that it would wreck the plant, but as it developed, the Texas sage has a pretty branch structure that was now visible once all the overgrowth and deadwood were gone. It actually turned out looking pretty good. 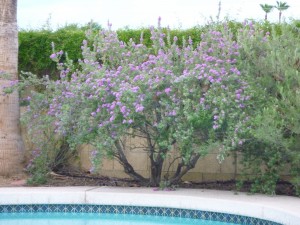 Later in the day, I came across this interesting post at Forbes, suggesting that one can assess (practically at a glance) whether a  new business enterprise will succeed. So far we’re scoring four out of five, and the fifth sign of success is one we’re definitely working on.

Speaking of success, over at Budgeting in the Fun Stuff, Crystal has published her first e-book, one with a tantalizing title: How I Make Money Blogging. Buy it here, and maybe you, too, can quit your day job! 😉

Abstract Aucklander’s eemusings is back from Sydney and working so hard she hasn’t had enough time to take a deep breath.

Evan ruminates on getting started early on building a retirement income stream. Now all we need to do is get all the other 20- and 30-somethings in America to plug into that idea!

Speaking of working your tuchus off, TB has been in the thick of the storm cleanup, hauling trees and dodging electric lines in 100-degree heat. I expect we’ll be seeing guys doing the same here tomorrow: a freeway flooded, cars were washed off roads, and a gigantic mess was had by all.

Money Beagle’s toddler has developed a passion to strike fear into a frugal parent’s heart!

Have you noticed that more and more young people seem to be suffering from shingles? A vaccine exists—it’s not guaranteed to prevent the excruciating resurgence of childhood chickenpox, but they say it does at least make for a milder case and faster recovery. Poor Girl Eats Well describes the effects of this ailment in vivid detail, and then she points out that the FDA has approved the shot only for people over 55. That’s something that needs to change.

On that note, it’s time to move along.

4 thoughts on “Rainy Day and Reading”