LOL! So the robocall scammers, presumably annoyed — really annoyed — at NoMoRobo so consistently derailing their nuisance calls ever since I subscribed to the program — doubled down today. As I reported this morning, one of them apparently drained the battery from one of my landline handsets, when I tried to use it to espy their caller ID. An hour or two later, in came a barrage of phone calls from area code 186.

This makes it impossible to report an unblocked call to NoMoRobo’s online reporting page. To do so, you have to enter the number’s area code, and NoMoRobo does not recognize an area code beginning with the numeral “1” — and so it won’t take the rest of the number that shows on your Caller ID, either. Clever exploit, eh? 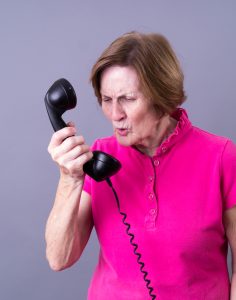 Turns out that 186-467-6230 is a number used by those scammers who call up elderly people and claim to be an adult grandchild, niece, or nephew who, as the hustle goes, has been arrested (or has been injured in an accident) and needs money fast to make bail or to pay for medical care. Click on that link: the stories it elicits range from astonishing to hilarious.

HOW a grown man or woman could fall for these pitches escapes comprehension. What planet do these folks live on? Do they never watch a TV news show or read a newspaper or cruise the Internet or hang out with their old college cronies on Facebook? Do they spend ALL their time filling out crossword puzzles? The “I’m in jail, send money now” scam has been around for so many years, you can’t even imagine how anyone could fall for it.

At any rate, it was a real blitz today. Half a dozen calls came in, of which three were attempts by the 186 scammers to get through. And the apparent draining of my bathroom extension phone’s battery: that was scary. If they can reach out to your equipment with some kind of code or signal and cause damage, that represents a serious problem. Fortunately, the other handsets were unaffected…only the one I picked up to try to disconnect the call was attacked. But still: this is not good.