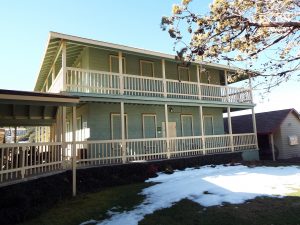 Yesterday VickyC and I finally made it up to Payson to visit our friends KJG and Mr. KJG in their beautiful, newly renovated home in the pines. It was wonderful to see them and to admire their lovely property.

KJG drove us around to some of her favorite haunts in Payson, a small ranching and tourist community perched at the top of the Mogollon Rim. The contrast between Phoenix’s toxic LA-style hectic traffic and the small-town vibe up there was amazing. Not once did anyone cut us off, park in the car’s blind spot, try to get-there-first, jerk around, or behave as though they were drunk, stoned, or demented. Nor did we, even once, run into a traffic jam occasioned by the city tearing up the roads.

We drove through a couple of districts where they’d looked at houses during their search for their dream house somewhere outside of the increasingly dystopic Valley of the Sun. There really are some lovely residential areas up there. And in some cases, the prices are not completely out of line. For about what I could get for my house, I could buy a nice place in town.

This, in sharp contrast with the experience of driving around lovely Phoenix on Wednesday:

I went up to the FedEx office, which is not very far from here. Really, if you didn’t have to traverse Gang Central, you could walk there from here.

First, though, I went to my favorite storefront mailboxes/xerox/notary public-type place, because a) they offer just about every service having to do with shipping, mailing, and minor office services you can dream up and b) I like those folks a lot and usually will try to give my money to people who have proven they can be nice to me. To get there, I have to cross the freeway. Main Drag South and Gangbanger’s Way are both fantastically dug up, creating backups that go halfway to Reno in one direction and halfway to Santa Fe in the other. So I figure I’ll go west across the freeway on Meth Lover’s Lane, the next main drag north of Gangbanger’s. The mail store is in a strip mall facing Meth Lover’s, westward across the freeway and on the north edge of the Ghost Mall (Gangbanger’s skirts this gigantic collection of vacancies along its south side). So it’s northward up Conduit of Blight Blvd toward Meth Lover’s, there to turn left and proceed west across the freeway.

Every effing road in this city is torn up. Wherever you’re going, you can’t get there from here…and yesterday provided no exception to that rule.

At the intersection of Conduit of Blight and Meth Lover’s Lane, they’ve got the damn road shut down to one lane. No left effing turn.

Fortunately, I spot this situation from afar, and fortunately I’ve lived in Our Fair City for so long its road map is imprinted on my brain. I cut off a poor bastard in the outside lane, swerve into the two-way left-turn lane, and jerk across oncoming traffic into a light industrial area. Proceed west as far as this little street will go, dodging an 18-wheeler who’s stuck trying to turn around (thank you, God, for sparing me from having taken up that occupation!); amble to the end of the street, turn north, and follow that road up to its intersection with Meth Lover’s, figuring it’s gonna be a real bitch to turn left onto that thing. Rev up the aggressiveness hormones (drivers in Phoenix learn to control these bodily functions by sheer effort of will….), grit my teeth and…HALLELUJAH BROTHERS AND SISTERS, there’s a freaking signal at Meth Lover’s!

So I get back on my way without having to risk my life unduly. Or anyone else’s, come to think of it.

The mail store folks say they can only do UPS but they point out that I passed a FedEx store on my way there, right on Meth Lover’s Lane. Ah! I know that industrial park!

So I turn back onto Meth Lover’s, cross the freeway eastbound, come to the FedEx store, and have to turn north (left AGAIN!!!!) onto the little street that goes into the industrial park. Traffic northbound on this tiny road is SO THICK that I cannot turn left into the parking lot near the FedEx store. I figure that’s because other folks, southbound, are detouring through the industrial park to dodge the mess at Meth Lover’s Lane and Conduit of Blight. They’re all as mad as I am, and nary a one of them is about to give another motorist a break. So I proceed down Little Street till I find another driveway in the back end of the parking lot. Dart in there and then drive all the way back up to the front of the lot and get parked near the FedEx shop. No problem sending the computer off to Apple…that’s very nice.

Now I have to get home, once again circumventing the mess at Conduit of Blight and Meth Lover’s. Holy sh!t.

Noooo way of getting out of the parking lot the way I came in: cars are now backed up to Flagstaff. However, the next road to the west of Little Street is Office Complex Drive. This proceeds past the insurance company where my son works, past the former site of the branch office that the credit union so conveniently closed, and past a grassy flood-control park where I used to run my German shepherd when she was young and fierce. AND it happens to debouche onto Gangbanger’s way, which goes right past my neighborhood.

The only problem is turning right out of the FedEx parking lot onto Meth Lover’s (circumventing the light at LIttle Street) and then darting across the fast lane (“fast” is not the operative word here…) and into the two-way left-turn lane. But thanks to the signal holding up westbound traffic at Little Street, I manage to take advantage of a Fellow Homicidal Driver’s momentary lapse in attention and dart across in front of him to turn left onto Faceless Office Building Road…only because FOB Road also has a signal.

Proceed without incident down FOB Road and reach Gangbanger’s Way. Mercifully, there’s also a signal at that intersection, allowing me to turn left onto the 7-lane main drag that is Gangbanger’s.

wooo HOOOOO! I got home alive, one more time!

Later in the day, I had to make a 40-minute drive to meet a client at a Barnes and Noble over at Arrowhead Mall, way to Hell and gone on the west side. It was pushing 4 p.m. by the time this confab broke up. Rush hour here starts at 3:00 p.m. sharp.

Homeward bound, I decided to stop by the credit union on the Great Desert University’s west campus, so I could deposit the check without having to dork with scanning it and uploading two images. This entails driving east across Bell Road — one of the main drags into White Flight Country, now situated on the far west side — then veering south on 43rd Avenue to Thunderbird, and sliding onto the campus. Not too bad: since most of the rush-hour traffic consists of whiteys headed homeward — in the opposite direction from the way I had to go — this went smoothly enough. The transaction completed, now the choices are to continue east across Thunderbird to the freeway, take the freeway to Gangbanger’s, and trudge east to the ‘Hood, or else go all the way across Thunderbird to Conduit of Blight, go south several miles, and then turn east onto Gangbanger’s.

Well. You’re crazy to get on the freeway any time after 3 in the afternoon. And the alternative would take me right back to the mess at Conduit of Blight and Meth Lover’s. Luckily, though, I have that map imprinted inside the brain. So…back eastbound on Thunderbird to 35th, south toward Gangbanger’s way, and thence to the ‘Hood.

Again because this route was east- and southbound, running in the opposite direction of the blue-collar workers and cubicle-dwelling office workers who get off around 3:00 or 4:00 and head home to their styrofoam-and-stucco boxes on the west side, I escaped a lot of rush-hour congestion. But traffic coming in the opposite direction? Holeee mackerel! At the light on the east side of the freeway, westbound traffic on Gangbanger’s was backed up almost a mile. There was no incident stopping them. It was just too damn many cars for the road to handle. That is, yes, seven lanes (if you count the two-way left-turn lane as a traffic lane).

When I got home from this junket, I called up “real estate, Prescott” and looked at the offerings in that Californicated small town. It’s a pretty area, and my house is now worth so much that I could in fact afford to live there. And I did find a couple of cute houses…but in general, I just don’t see anything there that I sincerely would wanna live in. Problem is, my house is damn nice…you’d have to go some to beat it, or even to match it.

The other options are the Oro Valley in Tucson (think I’d ’druther live in Prescott, thank you) or Sun City. The latter would be much cheaper. But my god. Living in a mausoleum ought to be cheaper!

Payson is significantly cheaper than Prescott. However, it has a few disadvantages: it has few urban amenities such as top-rated hospitals, Costco, gourmet grocery stores or even Sprouts; little choice of veterinarians, dentists, doctors, or much of anything else. Those things, of course, are readily available in Phoenix: an hour and a half down the hill.

But… Do you really want to drive an hour and a half to get to one or the other of those?

KJG does it without a blink: she said she’d driven into the Valley to see the kids twice last week. But…she’s highly motivated.

So. I don’t know. Do I want to uproot myself to get away from the traffic, the crime, the drug-addicted transients, the heat, and the overall lunacy? Maybe. But do I really want to leave my son and all my friends? Hmmm… 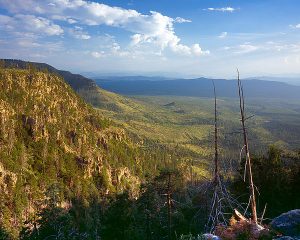 View from Payson. By Doug Dolde at English Wikipedia – Transferred from en.wikipedia to Commons., Public Domain.