Ay-MAZING, that’s how it’s gone. As you may recall, as soon as the hot weather passed, SuperPoolDudes launched into a total replastering and partial rebuilding job. This was right about the time Cassie the Corgi came down with what may yet prove to be a terminal ailment.

Whereas Cassie is only marginally improved, the pool renovation has been astonishing. 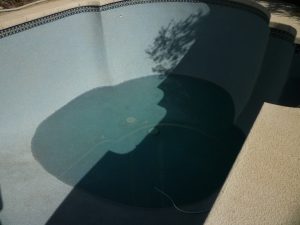 Today — for the first time since they finished the job — I tossed the hose in to add an inch or two of water. Last time was about six weeks ago. And in fact a top-up does not have to be done just this minute: the level is right at the tile line that marks its ideal level. In fact, I like to keep a little more than that in there, in case something happens to me that I can’t be here to maintain the thing  (like another fun visit to the operating room). Before this, I had to add water about every two or three days.

It seemed like winter refills were more frequent than in the summer, but in fact, during the summer I would be in the pool with the hose, power-washing algae off the walls and steps. And also in summer you have to water potted plants every day; usually during that process I would end up dropping the hose into the water while I fooled with this, that, or the other chore, which would refill even though I wasn’t doing so deliberately.

What does this mean? Well, my guess is that it means there was a leak in the shell or plumbing that got fixed when they replumbed to move Harvey the Hayward Pool Cleaner to the valve he’s supposed to work on or when they replastered and sealed the crack on the south wall.

PoolDude didn’t think that crack was leaking water out of the pool, because there was no rust around that area. But…I don’t know what other explanation there could be.

Think of that… If whatever they did saves $100 a month (on average: evaporation obviously is higher in the summer), that replastering job will pay for itself in 6 years and 7 months. And since the product’s lifetime is 20 years…well…

There hasn’t been so much as a flicker of mustard algae since we restarted the system.

The chlorine level is still high, a week after the last routine application. Acid demand is very high, though, which is a bit of a concern. It has to do, I understand, with the chemistry of the Pebblesheen, as opposed to the chemistry of old-fashioned white plaster. Supposedly this will settle down after the plasteroid cures. I hope so. It’s not a big nuisance…but adding acid is just another chore. As is traipsing around the city to buy it.

But really: when PoolDude remarked that the upgraded system would drop maintenance to near-nil, he wasn’t kidding. I haven’t had to do anything to that pool, other than test the chemicals and adjust — a very simple chore.

We haven’t had a lot of storm activity, that must be said. So the filter baskets are not filling up with leaves and gunk at any noticeable rate.

The idea of buying an extra pump pot basket and alternating them was brilliant. Now instead of having to scrub and scour the basket with the hose every time I have to clean it out, all I have to do is lift out one basket, set it on the pool shelf, and drop the other one in. Let the wet basket dry out, and all the leaves just shake right out! Noooo scrubbing!!!

So I’m thinking I’ll also get a second skimmer basket. This collects leaves that float on the surface. Now that Harvey is attached to a dedicated line in the side of the pool rather than hogging the skimmer inlet, the skimmer can actually do its job: skim leaves off the surface. 🙂

While I’m up at Leslie’s snabbing one of those, I’d better try to remember to ask my favorite Manager Dude if he has anything to help keep the scale off the tilework. Incredibly, the PoolDudes managed to remove 14 years’ worth of white scale from the antique tilework, which they also repaired in places. If it weren’t mid-century modern in style, the tile would look brand new! I’d sure like to keep it that way.

Lordie, but that water is soooo cold just now. I cannot BELIEVE that I managed to survive leaping into the deep end, in February when it’s even colder, to rescue a decrepit German shepherd who’d fallen in. If you had any question that I’m crazy, you can disabuse yourself of that doubt. I’m not just crazy. I’m batshit raving nuts.