Just a beer. And a plate of pasta: comfort drink, comfort food.

Finally finished shoveling away the layers and layers of paper that have floated in the door and come to rest atop my desk. Interestingly, the desktop seems to be made of wood…huh! I’d forgotten that.

So gawdawful much paper comes flying in the door or gets dragged into the house in a purse or stuck on the bottoms of my shoes…God only knows how it all it all makes it way in here. I tend to drop it where it arrives: on the dining room table, on a kitchen counter, on the passenger seat of the car, on my desk…on my desk…on my desk….

It took the entire morning to dig the desk out from its current burden of paper, some of it dating back to 2018. About 90% of it is stuff that either needs to be kept or needs to be shredded, so less than a trash-basketful goes to the recycling. {sigh}. Well, except for the stuff you run through the shredder…that, actually, can be composted, if you’re careful to avoid grinding up any of the plastic “envelope windows” that come with some mail.

At any rate, after several hours of sorting, file-folder stuffing, and shredding, boyoboy does that desk look CLEAN. Who’d’ve thunk it was possible? 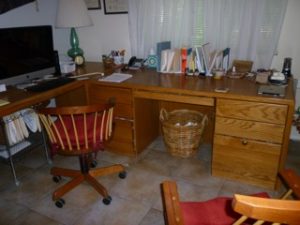 That notwithstanding, the overall hassle never, ever stops.

This morning the DropBox hassle developed a new twist and turn. I called to tell them I don’t want them to renew my annual subscription for extra space and was horrified to discover that despite my having spent two and a half days transferring 87 berjillion kilobytes to iCloud and deleting said kilobytes from DropBox, the damn stuff is still on DropBox!

That’s right. They keep it as a “back-up” stashed away where you can’t get at it to kill it off.

Getting rid of it takes an elaborate techno-hoop jump, following instructions that might as well be in Martian. I tried to reach a techie friend to see if I could hire him (please!) to help, but he’s not answering.

American Express, I guess. This is why I persist in using AMEX: like Costco, like Apple, they have superlative customer service. I call and reach a patient CSR. Explain the situation: DropBox is not about to let me off the hook, and I do not want to pay for the extra server space to accommodate data that they will not simply reach out and delete or explain to me in simple terms how to erase.

N-o-o-o-o-o problem, quoth the AMEX dude. He put a block on the next bill from DropBox.

DropBox charges $9.99 per month(!) for a terabyte of storage. Apple is now charging the same, for the same amount of storage — having dropped its price by 10 bucks a month. However, I do not need a terabyte of cloud space: for $2.99 I can get 200 gigabytes. Well, even unedited and un-shoveled out, my DropBox files add up to a mere(!) 160GB. A-n-n-d there’s a LOT of stuff in there that could go away. When I get around to it, I’ll move a pile of superannuated debris off of iCloud, which will free up enough space to last for all of posterity.

Weather is starting to warm up a bit. If I felt like jumping into slightly chilly water, I could plunge into the newly resurfaced pool. But I’m too lazy to get cold just now: bad human.

The watering system is on the fritz. I need to call an irrigation guy to fix it, since all Gerardo seems to do is shut off the valves for the parts that spring a leak, leaving my plants to die. He doesn’t seem to understand — or to care — that a potted plant will die in one day flat if it’s not watered daily once the temps are over about 90 or 95 degrees. So that’s yet another hassle to deal with.

And I do need to find a tree guy to remove the devil-pod tree on the west side, which has become a bit menacing. The US weather service expects this winter’s El Niño to linger over the Pacific through the summer. What meant nice rains in the winter, then, will mean heavy winds and violent monsoons this summer, hiking the risk of that tree breaking and falling on my neighbor’s house or mine. Again, Gerardo said he’d do it…but…no action there. Dayum….just what I need to kill some more time on.

The winter’s rain, though, produced some very gorgeous flowers this spring… 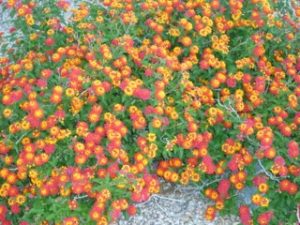 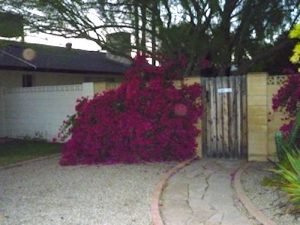 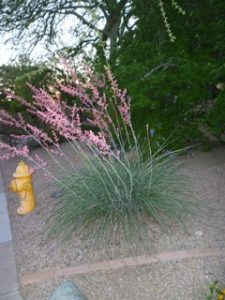 Unfortunately these look awful. Somehow the new iCloud thing has f**cked up my photo function. Dammit! Am I ever SICK of this computer bullshit! It just simply never stops!