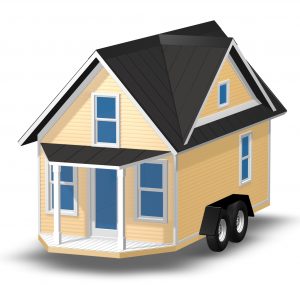 So here we are killing time by cruising the Internet till it gets warm enough to walk the convalescent dog, and what do we come across but this intriguing article reflecting on the joys and drawbacks of life in the faddishly current “tiny house.”

Tiny houses, as you’ve no doubt noticed, are (heh) Big these days: touted as small of footprint, gentle on the environment, and mighty cheap. And for sure: if you enjoy RVing or camping for lengthy periods in a tent, you could find one of these minuscule dwellings to be just the ticket. I can imagine that if you were single, or a young couple still madly in love and very close, a tiny house could be a solution to the housing problem.

As a vacation home? Reminds me a lot of a hunting cabin. Not something I can contemplate living in for any length of time, but maybe it would do for a weekend; at most for a month, assuming you were close enough to a town with a grocery store so you could reprovision occasionally. But I think you’d have to be pretty desperate to choose one of these things as a place to live long-term.

It might work if you lived in or close enough to a town were you could rent space to hang off-season clothing and store goods that are needed only occasionally. And if you ate out a lot. But if you were given to cooking every day, it’s hard to see how you could store even a week’s worth of food and cooking supplies in such a place.

To my mind, even a single-wide mobile home — what we old bats call, politically incorrectly, a “trailer” — would work better. And a double-wide? Far superior.  Although to my mind the costs, elbow-to-elbow closeness, and restrictions of a mobile-home park are prohibitive, there’s not a thing to stop you from parking your trailer in the middle of a piece of property where zoning permits. And that would include any number of idyllic rustic locales like the one pictured for the article in question. You really don’t have to keep it in a trailer park. Buy a piece of rural property, install a septic tank, and run lines from the local utilities, and you’ve got your own very fine trailer park. For one.

For that matter, there are trailer parks and there are trailer parks. Some are highly desirable: close to scenic venues, quiet towns, outdoor activities. La Maya and Bethulia bought a nice mobile home, spectacularly renovated, in a beautiful trailer park near the ocean in the Bay Area, for example. It’s not only in a very pretty spot, it’s close to a college town with every amenity you could possibly crave and then some, and it’s not so far from San Francisco.

When we were looking for a place to move SDXB’s mom — this was at the time the Bush Recession trashed the sweet WW II-vintage garden apartment complex where she’d been living — we realized that for what she could collect from the depreciated value of her garden apartment, about the best she could afford would be a mobile home. Some of the places we saw during this search were amazing. Not all that cheap, it must be said — but certainly not the cost of a stick-built house.

At one point, we found a mobile home that was nicer than my house — and my house was on the high side of middle-class. It was larger than my house. It was newer than my house. It had a better kitchen. And, perched on a hillside north of town, it had a view to die for. Plenty of room between the neighbors — the lots were at least a third of an acre apiece, some significantly larger. It was close to where SDXB and I were living, not far from a first-rate hospital, and within reasonable driving or taxi distance of grocery shopping.

Really: if that place had been in Yarnell, I’d have bought it for myself! 😀

Alas, though, the “had been in” part was the kicker.

We saw it on a weekend. I went back out there along about the middle of the following week, to explore the tract and to take another look, by way of confirming that what we thought we were admiring wasn’t just wishful thinking.

But that’s not all that was there. Just to the west of the subdivided residential land was…ohhh wait for it… A huge sand and gravel operation! Vast monsters of equipment were fully engaged in tearing down the side of a hill that, when things were quiet, appeared to be part of the Phoenix Mountain Preserve. But which clearly was not. The air was thick with dust and the noise was crazy-making.

That was too bad. Because without that little…uhm…drawback, it would have been a lovely place to live.

Nevertheless, it did demonstrate that by including mobile homes in your search, you could find a double-wide that is larger than my four-bedroom house (square footage-wise), just as pleasantly appointed. and a whole lot cheaper than the $430,000 my house is supposedly worth now. 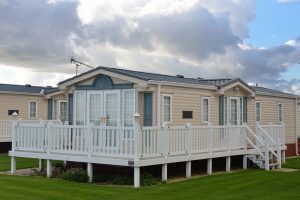