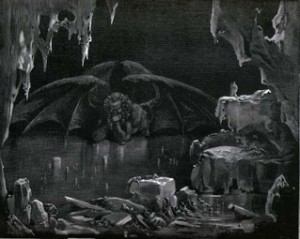 A cold day in Hell…

Yes. Walmart, bless its corporate heart, managed to bring a quick, neat end to what started out as a Day from Hell, morphed briefly into a sad but real Day from Heaven, and then began to slide downhill again.

Cassie the (Ailing) Corgi had a pretty good day yesterday — at some moments possibly even rising to a 10 on a scale of 1 (about to expire) to 10 (back to normal). Foolishly, I thought, oh gosh! she’s gonna be OK!

Beginning about 1 in the morning, she started coughing again. And coughed the rest of the night away. By morning she was so exhausted she was immobile.

In the interim between the time the dogs and I roll out of the sack and the time I can reach the vet, I pick up the laptop and, in the course of glancing at the news and waypoints, visit a complicated draft “page” at Plain & Simple Press where I store material waiting to publish it. Yesterday I spent HOURS updating and fully formatting it, an endless, tedious, mind-numbing job.

Yes. Hours of brain-banging work, disappeared. And no, I couldn’t retrieve it for love nor money. But there wasn’t much time to fret about it…

This was pretty tight because I had to sing at a funeral at 10. And this was not one I was about to miss, since it celebrated the life (and presumed afterlife) of a lovely friend.

Okay. Brush teeth. Wipe off yesterday’s make-up. Throw on some fresh make-up. Lift the dog into the car, where she collapses in a limp pile. Fly through the rush-hour traffic, to the extent that one can fly through such a thing, and make it with eight minutes to spare. Time ticks by as the vet and I and her underlings discuss. It’s pushing 9:15. I still haven’t fed Ruby and still am not dressed in the requisite black duds and still have a half-hour or more to get back to the house and another 15 minutes to get down to the church. Nor, we might add, have I had breakfast or even so much as a swallow of coffee.

Seeing that I’m getting anxious, they suggest I leave the dog at their clinic, where they will test her again for the alleged, never-proven Valley fever and test for heartworm, which can cause the same kind of coughing, lassitude, exercise intolerance, and bloating. At this point, the new vets persist in the theory that the problem is not the diagnosed adrenal tumor but in fact is yet-to-be-provable Valley fever. This is entirely possible: dogs frequently test negative on the first try at Valley fever testing. It has, however, been more than 4 weeks (by far) since the first effort, so if she does have the disease, by now she should test positive. They want to put her back on fluconazole. I tell them I’d rather put her down, it made her so sick. They propose another concoction that has even worse side effects.

I fly out the door and arrive at the funeral rehearsal right at 10 a.m., to the director’s surprise (since I’d emailed her that I’d be late). On the way there, I reflect that she was also taking prednisone during the last go-round with fluconazole. Prednisone had some mighty baleful effects on the dog. It occurs to me that there could be some drug interaction.

The funeral comes off very lovely. Dear friend and leader on the choir who just had hip surgery showed up and, amazingly, managed to get up the stairs and participate in the whole ceremony. Old friends who have been off the choir, beautiful voices, also attended: a joy to sit with them and listen to them sing again.

Later, when I get back to the house, I look the drug interaction question up and discover — from Pfizer, the horse’s mouth — that discontinuing fluconazole causes increased metabolism of prednisone, which leads to adrenal insufficiency. Which would explain quite a lot…possibly we could try the fluconazole in the absence of prednisone to see if it will go down any more easily.

Along about 3 p.m., I get back to the veterinary. Cassie is barking and looking pretty perky. WTF? She was at Death’s Door in the morning…I had to carry her through the house to the car and then carry her from the car in the vet’s door.

They did another chest X-ray, since they never were able to extract the image I paid for from MarvelVet. They also did a heartworm test and sent off for another Valley fever titer.

However, it’s beginning to look like the dog probably does not have Valley fever. The white area around the lung and heart that MarvelVet cited as proof of his hypothesis was gone; the sound of her chest has been clear for several weeks, and still is. New Doc believes the problem is and has been a bronchio-pneumonia, probably of bacterial origin because the doxycycline we gave her for the UTI she developed seemed also to help clear up the cough…and doxy is the drug of choice for doggy pneumonia.

Unfortunately the doxy made the dog so sick I had to take her off it after 19 days (of 21 prescribed). She thinks, though, that the dog may be on the mend, and she’ll be OK if we can soothe the cough.

So she suggests Robitussin DM, in a dosage she specified.

As for the adrenal tumor, this new intelligence just in:

So…if our furry friend picked this up while nosing around in the grass during a doggy walk (which is how such infections spread among dawgs), I guess I should feel lucky Ruby didn’t get it, too. Actually, Ruby did cough some, very mildly and for just a few days; she may have had it and thrown it off because she’s so much younger.

This poses the possibility, though, that Cassie could recover. Maybe.

Now, as for that Robitussin DM: for veterinary purposes, the stuff has to have 20 mg of dextromethorphan and 200 mg of guaifenesin per 10 milliliters of sauce. Ohhkayyy…

So I figure I’ll trudge down to the Walgreen’s, stand in line till the cows come home, ask a pharmacist to direct me to the correct concoction, and…ugh, how awful does that sound?

Why do that when I can order it up from Amazon?

I do not want spoonsful, prepackaged in plastic waste or not. This stuff has to be hoovered up into an oral syringe so it can be squirted down the hound’s gullet.

Now in the middle of evening rush hour, whereinat you can not turn east out of my neighborhood because of the effing stupid “reverse lanes” the city has inflicted on us, I set out for the nearest Walgreen’s, which rests near the corner of GangBanger’s Way and Commuter Nightmare Parkway East. This, I dread, because I’ve been harassed in that store’s parking lot before and do not look forward to more harassment. The other nearby Walgreen’s is here in the ‘hood — couldn’t pay me to unlock my car doors in front of that place, especially not at dusk. The third Walgreen’s is way on down East Commuter Nightmare Parkway; though I can turn into its parking lot (where I also have been harassed), turning out of it in a direction that will bring me home is, shall we say, highly problematic.

O shit o hell o damn i do NOT want to do battle with any one of those dreary Walgreen’s.

But…right about then it dawns on me that I don’t hafta. There’s a Walmart on the way to Nearest Walgreen’s. It’s on my side of the road (no illegal or risky left turns across torrents of traffic) and its exit guides me straight to a left-turn lane that sets me on my way home, via Gangbanger’s way. Hot dayum!

Get into Walmart. It’s crowded — I have to park a long way from the front door. This — crowdedness — is a good thing, because drug-addicted panhandlers tend not to pester anyone when there are a lot of people in the parking lot. Into the store without incident. Quickly snab a fine young pharmacist; tell him the challenge. The kid is ready to rise to it. We sally forth into the cold nostrum aisle, and darned if he doesn’t find a version of Robitussin DM that comes close to the required proportions.

I say this is 20 mg of dextromethorphan and 200 mg of guaifenesin to 20 milliliters of sauce, not to 10. He points out that the solution to this is simply to give the dog twice the suggested dose.

Yeah. Well: we do have the possibility that a rushed vet could have the proportion wrong.

I say the solution is even simpler: give her the suggested dose and see if it works. Often OTC stuff like this will work with less than the recommended dose. If it does: bully. If it doesn’t, so then I just give the second half of it. He allows as to how this is an acceptable plan.

I grab the dope, head for the door, and in spite of a hectic scene find a cashier standing there all by his little self. Pay and shoot out the door without having to wait a minute.

Traipse to the far end of the crowded parking lot: not a single panhandler in sight. Yes!

Thank you, Walmart! Who’d’ve thunk it?