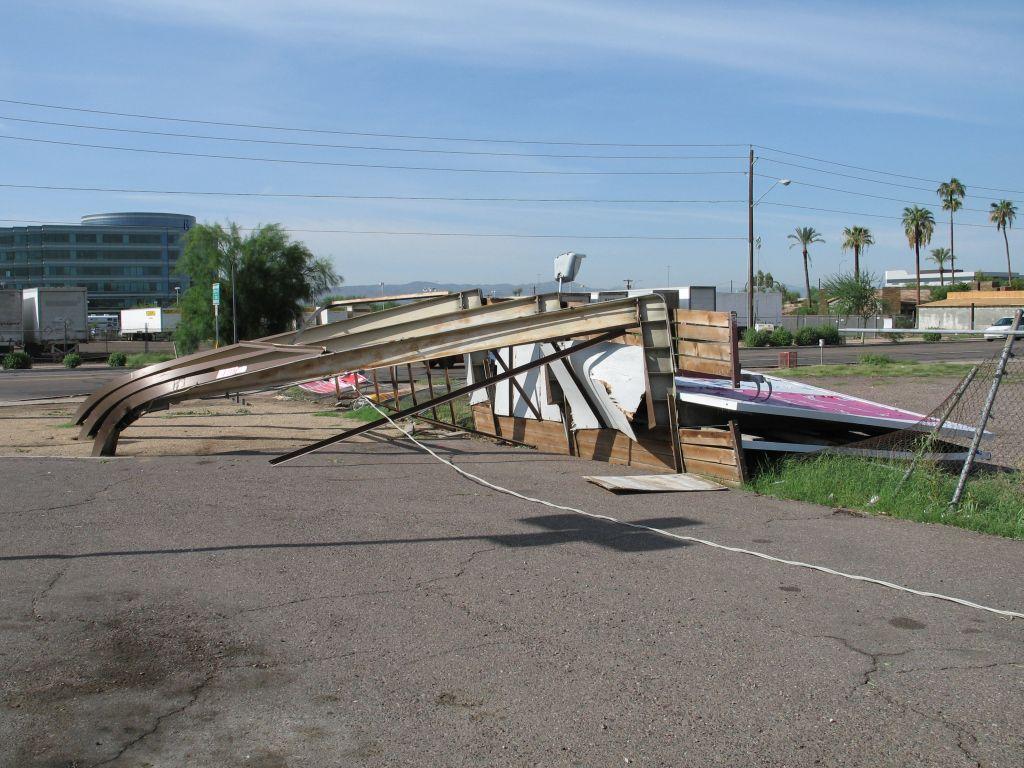 Power is still out for tens of thousands of Phoenix residents. Just now, at 10:30 in the morning, it’s only 92 degrees on my back patio, but humidity is said to be 61 percent.

So, I account myself extremely lucky that here the power was down for only an hour or so, and even more extremely lucky that the devil-pod tree* did not snap off in winds clocked as high as 100 miles per hour. Nor did any of the other trees, all much in need of thinning: desert willow, Texas ebony, vitex, palo brea, palo verde, yellow oleander, and the moribund ash.

Check out this photo, baldly stolen from ABC News (Channel 15), of a large billboard bent all the way down to the ground! Don’t know how long that link will stay live: it’s worth a visit for the amazing slide show of 185 dramatic photos, among them some stunning shots of lightning.

Our associate editor e-mailed early this morning to say DON’T COME TO CAMPUS! She said trees were down and blocking the way into the building. To get into the office, she had to wade through a six-inch deep puddle. News reports show signals out at several of the major intersections I have to traverse, and so…I believe we’ll be telecommuting today. Unclear whether our offices, which occupy a condemned building (yes) (don’t ask) (it’s better not to know), got any water; I asked her to check, and, having heard nothing, imagine we’re O.K. Hope so. I don’t want to have to traipse two hours through impossible traffic and chaos to deal with that.

It took about three hours to clean up the back yard, though I hafta admit that a large part of that time was spent cutting back the red salvia that tried unsuccessfully to cannibalize the Myer lemon (salvia 10; lemon 98), the overgrown lavender, and the overwatered, rotting sage plant. Even the aggressive salvia was less than happy: we’ve had so much rain this summer that many of the Mediterranean and xeriscapic plantings I put in the yard are turning to black slime. The pool would have been OK — in fact, probably wouldn’t have needed any extra attention — were it not for the devil-pod tree. I pulled a good bushel of pods, pollen balls, leaves, twigs, and small branches out of the water.

I occasionally consider whether to have the tree taken out. That will cost almost a thousand bucks, on top of the thou’ it will take to remove the dying ash tree in front. Really, only in the summer does the tree turn into a real nuisance. The rest of the year it’s quiescent. On the other hand, I was alarmed enough last night to stay out of the bedroom, where the tree will hit if it decides to fall on the house. The wind came up again after I posted last night’s storm report; Cassie and I ended up sleeping on the living room sofa. Less than perfectly pleasing accommodations.

The tree has some advantages, not the least of which is that its thick foliage forms a privacy barrier between the pool and passers-by on the street. Some members of the public are given to using the shrubbery as their toilet, so…as you can imagine, these are not folks you want peering into the yard. It could take a couple of years or more to get something else to grow big enough to block unwelcome gazers. And it does put some shade on the concrete pad, which functions as a horizontal trombé wall to conduct heat into the bedroom all summer long. Removing the tree would make the bedroom even hotter than it is (which is plenty: it’s the warmest room in the house), jack up the summer power bills, and take a great deal away from the backyard’s privacy.

In terms of making the house affordable for retirement, though, getting rid of that tree might be the best thing to do. It would be one fewer tree that needs a professional to thin and groom it every year or eighteen months. Last year I spent about $750 on tree care, all of which needs to be repeated right now. And Matt didn’t even touch the devil-pod tree. Who knows what he’ll charge this year? If I’m to stay in this house, I’ll have to cut the costs of yard maintenance somehow.

* Satan and Proserpine, the previous owners of the House from Hell, planted this tree directly upwind from the swimming pool. They claimed it’s a weeping acacia. Unlikely. Whatever it is, the thing is a good forty feet tall, a height it has attained mostly in the five years since I moved in, and “low litter” is not the operative term: it drops leaves, twigs, pollen puffballs, and seed pods that stain the CoolDeck and the pool’s plaster. This was not a pair who understood much about plants: they thought the two(!) sissou trees they stuck in the front yard would never get taller than about 15 or 20 feet.