Now, admittedly I thought I would hate Twitter when the thing first developed. The very concept was anathema, then as now. But okay. I know. One must go with the flow. Especially if one wishes to sell stuff, apparently. Or if one wishes to waste vast swaths of one’s time. I guess. 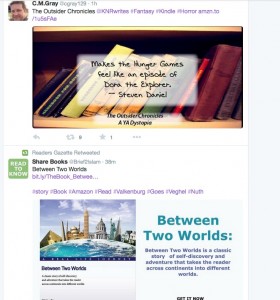 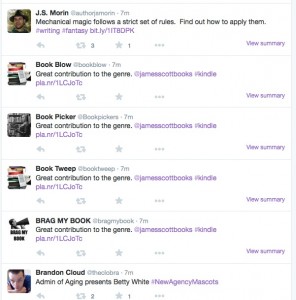 Pretty typical stuff, it is. Either ad after ad after mind-numbing ad for low-rent self-published fiction (and YES that IS exactly what we’re publishing over at Camptown Races Press) or toilet-paper rolls of drivel and irrelevancy.

Can it possibly be effective, even faintly effective, to cultivate a presence in any such swamp? How? How on earth can anyone manage to get any worthwhile attention amid all this meaningless, mind-numbing, brain-thwacking static?

Okay. I’m tired. It’s raining. It’s so humid that just sitting here on a chair in front of a computer causes dew to form all over your body. The dogs are comatose. I am comatose.

But I believe the reason I’m comatose has more to do with Twitter than 90% humidity on a 90-degree day.