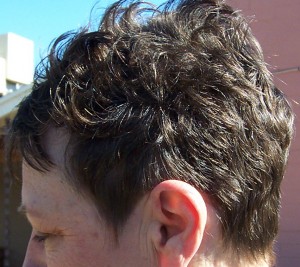 Well, clearly I’m going to have to find some way to “pay it forward” to the church and most specifically to the choir. My gosh! Choir members have risen in mass to help me out. Yesterday morning a fellow named Kerr came over to collect me and drive me all the way to hell and gone out to Scottsdale to get my hair done.

He’s the gent whose wife fell and busted her shoulder last fall. He said she’s back to normal now. Her fiasco was significantly worse than mine because instead of just inflicting a set of cracks in the bone, she actually snapped it into two pieces. Ouch!

So it’s reassuring to know that in spite of having a worse injury, she recovered: apparently with no long-term ill effect.

At any rate, once we got to beautiful downtown Scottsdale, we found that my old and much beloved hair stylist Shane is still there! As requested he cut off the Rapunzel-esque locks into a cute, curly style… Yes, to the tune of sixty-eight dollars. And so now I will have to budget something to visit him once every two months. {grump!}

The mop needed to have about four inches of split ends trimmed off. But I rather resent having to get it all cut off. As a practical matter, though, with a crippled arm I can’t even wash it, much less comb the tangles out of wet hair or keep it combed and brushed between launderings. So… it is what it is, to coin a phrase.

Today, the pillar of the choir, D., is going to pick me up and take me down to the dentist’s office.

I made this appointment when a little revelation struck me. As I was reviewing the test results that the Mayo has posted on its portal, I realized that none of them is outside the range of”normal” except for the A1C measurement, which is a grandiose .1 above normal. The vitamin B12 level, which Dr. Fields blamed for the crazy-making peripheral neuropathy, is smack in the middle of the normal range. The last I spoke with her, she remarked that she could not understand why, given these improved numbers, the PN hasn’t started to go away.

This led me to wonder if there might not be some other cause for the present ailment. And lo! Looking around the hypochondriac’s treasure chest that is the Internet, what do I discover but that a titanium dental implant can cause peripheral neuropathy! The site that has the most detail that I could find seems to indicate that by “peripheral neuropathy” they’re talking about tingling in the gums and lips. Mine started there but has spread to the hands, arms, feet, and legs. One would think that might suggest some more systemic problem than just a local reaction to a dental implant. However… now that I think about it, before all this started I had an episode of burning mouth syndrome. That seemed to come out of nowhere… But maybe it didn’t! Maybe it was a response to all the damned dental work.

At any rate when I called the dentist and mentioned peripheral neuropathy, you could hear his ears perk up over the phone line. This is a very smart guy. And so I think it will be worth raising the question of whether the metal they stuck in my gums could be causing this thing. Elsewhere I learned that a test exists that supposedly can tell you whether you have a titanium allergy. I’m going to ask him if we can get that test done somewhere here in town.

D. picked up a bunch of things for me at a Fry’s here in town, and tomorrow she’s going to drive me to the dentist’s office. A week from tomorrow, my son is driving me back to the Mayo for another x-ray and a repeat visit with the orthopedist.

The result of all this gallivanting is that I didn’t read one word of the client’s magnum opus. In fact the stuff has been such a distraction and I’m so effing tired that I didn’t even think of it until just this minute. Tried to sleep in the afternoon to no avail. Now at 9:30 in the evening, I can barely hold my eyes open.