So my friends from church, J & L, have sold the manse and are moving into a life-care facility called The Beatitudes.  J is thrilled at the idea (well, pleased, anyway), whilst L says it’s going to be like moving into a prison. Today they took me to lunch there, after we dropped off some loot at the new digs as part of the moving project. 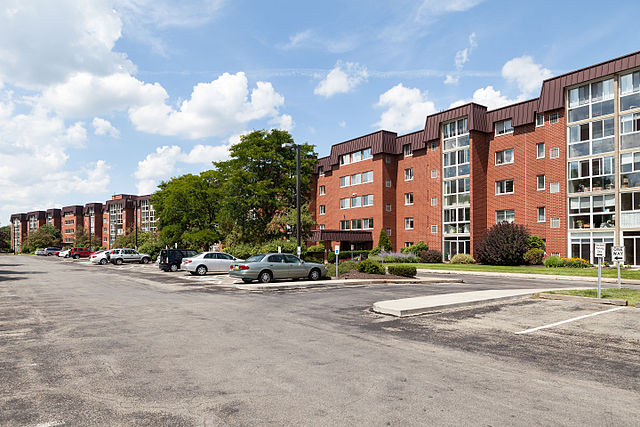 The future of old age?

The Beatitudes has been around since long before “life-care communities” became a Thing. As long as I’ve lived here (and that has been a long time), it existed at its present site as a nursing home and warehouse for the elderly. As my generation has aged, we’ve become a gigantic communal cash cow, and so the present places are being massively upgraded as their management tries to keep up with newer resort-like living arrangements for the affluently agèd.

I’ve been interested in J & L’s experience, partly because sooner or later I’m going to have to figure out how to get myself cared for and partly because my two friends’ widely disparate views of the thing exactly reflect my conflicted thoughts on the matter.

As soon as my mother died, my father got himself into one of those places. This was in the mid-1970s. Run by the Baptist Church, it was called Orangewood; like other surviving first-generation independent living facilities, it has been massively remodeled — rebuilt would be the term — and now sports a new name. He was only 67.

Before my mother took ill, he proposed that they move to this Orangewood place, mostly because he preferred apartment living to having to take care of a house and yard. Life-care communities were a recent development at the time, and as soon as he learned about them, he thought it was a great idea. Horrified, she resisted. She died before that argument could go very far. So, off he went to Orangewood.

He apparently liked it. However, it’s important to note that having gone to sea all his adult life, he was well adapted to institutional living. (“Institutionalized” is the term that comes to mind…) He didn’t seem to care about regimentation or confining rules or living elbow-to-elbow with his fellow inmates. If anything, he seemed to relish it.

So okay, he moves into Orangewood. When my friend L says he thinks moving to the luxurious environs of The Beatitudes is going to be roughly the equivalent of moving into a prison, the Orangewood experience is where he’s coming from. In exchange for a great many amenities — some of which were true Godsends — Orangewood extracted obedience to some onerous conditions. For example…

But there were trade-offs that made these conditions not so onerous.

So… My father moves into a one-bedroom apartment that seems to suffice for him — bearing in mind that he had spent most of his adult life living in a ship’s cabin. It was certainly better than an SRO, an option he had more than half-seriously proposed. Shortly, Helen notices him and sets her sights on him. (Even in his late 60s, he was a handsome man.) Before the end of the year, they marry. They move together into a cramped two-bedroom apartment which to my taste would have been OK for one person. But that was what was made available to married couples. Since Helen clung to her worldly goods like a crab with prey in its claws, this place was, shall we say, cluttered.

But that was none of my business, even though it made my father crazy.

Every now and again, they would invite us to join them for the dinner-sized midday meal. I abominated this, because the food was truly awful: steam-table buffet gunk, most of it reconstituted from packages. I remember looking at it and wondering how can they justify feeding this stuff to elderly people with cardiac conditions? Every meal was high in starch and high in salt. Every dessert came out of a box. Equally wonder-making was how the inmates could bring themselves to eat it, day in and day out.

As far as I could tell, they apparently didn’t mind. I concluded that it was true people’s taste buds die in old age, and so they couldn’t tell the difference between industrial junk food and real food.

(In my own old age I have not found that to be true. Believe it or not, I can still taste food and I can still tell the difference between real food and fake food that comes out of a box or a can.)

But whatEVER: my father and Helen didn’t complain. Nor did they seem to be able to understand why we would always have something else to do when invited to dine with them.

To my mind, the place was dreadful: the apartment oppressive, the limited space cramped for one person and hideous for two, the food terrible, the Big-Brotherly oversight creepy, and the institutional conditions questionable. At one point a plague of food poisoning spread throughout the entire population — almost everyone was sick with severe diarrhea and vomiting. This, the inmates were assured, was a harmless and passing “stomach flu.” Which, I guess, was how the management spelled “someone in the kitchen failed to wash their hands.” Or worse.

The Beatitudes is much different — at least, the part I can see is. J & L’s high-ceilinged apartment, which is not exactly spacious but still is well laid out and has an astonishing view of the city and the Phoenix mountains, has two full bedrooms and bathrooms, and a full kitchen with plenty of cupboard space, a pantry closet, a full-size double-door refrigerator, a full-size stove and oven, a dishwasher.

You should see this place. It’s like moving into the freaking Ritz-Carlton!

My friends insist that no rule requires you to show up at any of the three eateries (two of which are pretty fancy). If you pleased, you could cook all of your own meals. We went to the informal joint for lunch — it’s a kind of bistro-like affair where you can get soups and salads and whatnot. Service is sit-down: food is delivered to your table. You do not bus your dishes.

Some of the food was pretty good. Not great, but reasonably good. I had a white bean chili that was edible enough. L had a sandwich of packaged cold cuts that looked revolting. J had a bowl of soup, about which she did not complain.

I think if I lived there I would fix most of my own meals in the apartment’s more than adequate kitchen. But those restaurants would always be there if you didn’t feel like being bothered.

Given that you can now order up groceries for delivery, you could stay pretty independent for a very long time in that place. If you were not required to eat in the restaurants (I think they may have to buy a certain number of meal tickets, but no rule says they have to use them) and if nobody was poking their nose into your business, it actually would be a reasonable way to address the vicissitudes of old age in a fragmented society.

It’s something to think about.

I do worry about what is going to happen if I live another 10 or 15 years. My friends are in their early to mid-90s. But even in your 80s, you certainly could find keeping up a big house and yard quite a challenge.

You could hire help…but…who’s to say what kind of help you’re going to find? My friends have a cleaning lady who comes in regularly. As the two contractors who are helping to move them to their new digs were hauling stuff out to their vehicle and mine today, we found most of the stuff we were picking up off the tables and cabinets hadn’t been dusted in weeks. This woman is apparently not dusting things like the lamps and the fake dieffenbachia and the pictures. If she’s not doing that, what else isn’t she doing?

An apartment is a lot less space to have to take care of than the Funny Farm. And quite the cottage industry is growing up around the aging of the Baby Boom. The institution down there on Glendale Avenue is only one manifestation: the other day I read about a woman who started a business driving elderly people around. She’s apparently doing quite well at it. And then we have the two women who are helping my friends pack up for the movers and organize where things should go in the new digs: helping elders move IS their business. They’ve made themselves known with a bunch of the old-folkeries like The Beatitudes — there are now quite a few of them in town — and they have as much work as they can handle. Sometimes more. Then there’s the guy who charges people to serve as a companion for exercise walks. Want someone to get you off your duff and into your walking shoes? Call this fella.

See what I mean? Given that this industry is developing, why not take advantage of it?