So the handsome young Mega-Church Audio Engineer, who apparently earns a fairly decent living if the cars he and his wife drive are any indication, has put his house on the market. This two-child couple are classic urban upwardly mobile folk, the sort who buy in an aging neighborhood like ours and, bless’em, handsomely fix up decrepit houses that they perceive a) as better built than the present ticky-tack and b) quaintly Mid-Century Modern.

The house they bought was a crumbling rental right behind the house SDXB  used to live in.

The original owners, a reclusive pair who had lived there for at least a couple of decades, were thought to be mother and son. Whatever they were, they were quiet but strange: good old-fashioned slobs. They let the place run down year after year after year.

Eventually they sold the place to the Perp, a guy who turned our neighborhood into his personal rental empire by converting every home he could grab from elderly original owners, who had no idea they were giving away their property for a fraction of its real value. The Perp did a little do-it-yourself fix-up, filled in the nonfunctional swimming pool, and rented it to some serious sh!theads. The last of his tenants was a guy who abused his children so violently that the neighbors across the street sold their home to get away from the sound of the screaming. They announced — to the Perp himself as well as everyone else — that the abuse was upsetting their own children so much they could no longer live there.

SDXB was up on his roof doing some shingle repairs, when he glanced down into the guy’s backyard and noticed the sh!thead had penned two young puppies in a cage out in the glaring 100-degree sun. He reported this to the Perp, who lived next door to him at the time. SDXB announced that if he saw this again he was going to call the SPCA.

But he didn’t have to: when the neighbor across the street made his announcement that he was moving because of the child abuse, the Perp (to his credit) (I guess) told his charming tenant that if he heard one more word of any such shenanigans, he was going to report them to Child Protective Services. By dawn the following morning, tenant, wife, and bruised children were gone, disappeared into the shimmering mirages of the Cadillac desert.

Shortly thereafter, Perp sold the house to a couple who took up residence there like normal people. The wife was a kind of DIY decorator who liked to do fix-up, and they did improve the place considerably. Not enough to where it looked like a normal house, but better. Much better. Amazingly, they excavated the pool. But they never so much as touched the decrepit, feral front yard.

They divorced. The wife got custody of the house. She turned it into a rental again and moved to California. Not surprisingly, the deterioration resumed.

What a wreck it was! And it’s right at the entry into our neighborhood, so anyone who was coming to look at a house for sale in our area saw, first thing out of the box, this slum property. Needless to say, our property values did not soar into the stratosphere.

Finally, along comes the present young couple. They get the house, and the first thing they do is shovel out the gawdawful landscaping. They, as it develops, are no-nonsense gentrifiers. After several years of painting and clean-up and pool renovation and interior restoration — much of it on a DIY or barn-raising basis, the house looks pretty darned nice.

Nice, but not gaudy.

What are they smoking?

Some Biblical weed, apparently: last August they listed it for $399,500; about two weeks later they dropped the price by 20 grand, and then they took it off the market in October.

Not, when you come down to it, the antics of someone in his right mind.

Zillow thinks my house is worth about $317,000. His is the same model as mine; he’s persuaded Zillow that it’s worth $367,241…possibly by overstating the square footage. He’s claiming it’s 167 square feet larger than mine, suggesting he’s probably counting the garage in the livable space…which is illegal. Oh well.

I imagine this spate of grandiosity is inspired by the Amazing Starburst of the fix-up around the corner. 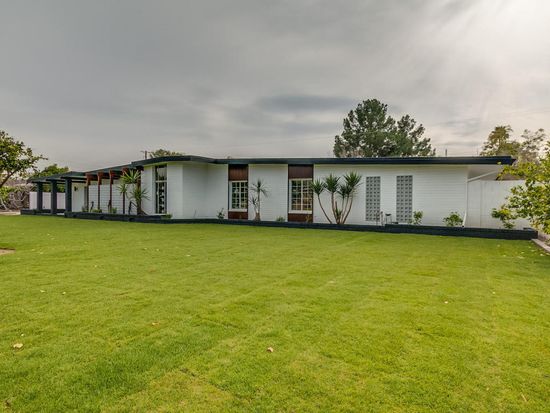 This vintage (real!) Mid-Century Modern babe was bought by professional fix-and-flippers after the ancient old guy who lived there finally passed away. It’s huge: 5 bedrooms, and the original owners converted the garage into a gigantic TV room, thereby manufacturing 2861 square feet in which to raise their several children.

The speculators ran amok in upgrading the place. It looks like they put in top-quality stuff, and the style is Late Urban Loft. It’s quite a production… 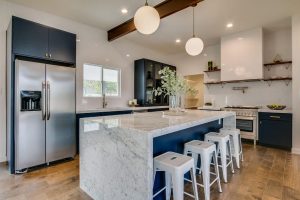 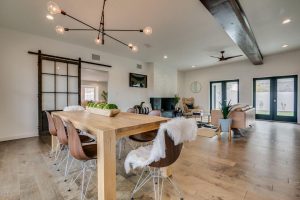 It’s a little hard-edged for my taste. They painted all the woodwork, throughout, black. But you have to allow: it’s just the thing for a young couple, straight or gay. And young couples, straight or gay, are exactly the future residents we old-timers in the ‘hood covet.

After contemplating these phenomena, I came home and looked around the Funny Farm.

Not much has been done to it since I moved in, about 13 years ago. Compared to the Richerati Moderne around the corner, it’s beginning to look a little shabby. Needs new paint, inside and out. Its handsome cabinetry and black appliances (and its oven that dies if you dare to turn on the broiler) are…well…getting a bit dated.

But it occurs to me that with minimal painting on the inside — minimal as in even I could do it myself — the place could be made to look a lot more up-to-date.

Fortunately, my friend Elaine, who chose the paint colors for this place, had a real flair for style. The color scheme was well ahead of its time. Those fancy new houses are painted in shades of gray and pale beige. So, interestingly, is the Funny Farm. The difference is, the living room is a sort of swamp green — well, that’s what we called it. It has an accent wall in swamp blue — a kind of deep aquamarine, sort of dusky blue-green. The hallway and adjacent accent wall in the dining room is this crazy Mexican orange, something I came up with and have loved a lot, but that I do recognize is pretty idiosyncratic.

If I were to paint the swamp blue wall in the living room that soft color of green (one of these houses has a wall in a very similar color) and then paint the hallway and dining-room accent wall the very lovely ivory white (almost beige but not quite) that inhabits the dining room, the family room, and the kitchen, that would bring the interior color scheme right up to date.

There’s not a thing I can do about the kitchen and bathroom cabinets and countertops. It might not cost that much to replace the counters with granite, but new cabinetry would run upwards of $15,000 or $20,000, which I surely couldn’t afford. Probably couldn’t afford updated countertops, either.

The exterior needs a whole new paint job, and that is going to cost $4,000 or more. The paint around the slab has crumbled away — it needs to be scraped off and the cracks sealed, a certifiable bitch of a job. I’ve really liked the colors and would probably just repaint in the same shades, except for the chimney. But all of the paint has faded, and so everything, walls, trim, chimney, you name it, would have to be repainted.

Interior painting I can manage myself. Exterior: not a chance.

But four hundred thousand dollah? Seriously? That’s almost twice as much as I paid for the place.

The neighbors and I think we’re looking at another housing bubble. These prices are completely out of proportion to what the houses are: 1960s and 70s tract homes elbow-to-elbow with not one but two dangerous slums.

But one could argue that we’re looking at gentrification of yet another close-in middle-class neighborhood, movin’ on up…and turbocharged by the ultra-stylish, über-urban light-rail line. For all its impracticality and all the unlikelihood that any of them are going to use it on a regular basis, the hipsters romanticize that light-rail to a high pitch.

The historic Encanto district, where the ex- and I lived after we married, gentrified just like this shortly after we moved there, and it has never un-gentrified. The house we paid $33,000 for is on the  market, as we scribble, for $824,900.