Ta DAAA! Just back from the neighborhood Albertson’s, where I scored the third and last Covid-19 fix. Couple days ago, I got the flu shot — also in those down-at-the-heels but relatively peaceful precincts. Wanted to wait until any soreness or crankiness from that wore off before subjecting myself to whatever the covid shot might do…which so far is…nothing.

Normally, I wouldn’t go into that Albertson’s on a bet. Ever since a panhandler chased me around the parking lot at a run, I’ve avoided it (Noooo….the Funny Farm is not located in the loveliest of all possible venues….why d’you ask?).

But a few days ago, I went into the Safeway to get this year’s flu shot — where I normally go for these things and for grocery items that can’t be had at a Costco, at a Sprouts, or at the fancy gourmet grocer down at Central & Camelback. It was the middle of the afternoon and there were six people in line ahead of me. After filling out an endlessly nosy form answering irrelevant questions that are strictly none of anybody’s business, I got in line outside the little room where they take their victims….uhhh, patients.

Over to the Albertson’s. Hardly anyone in the store (not surprisingly). Just one merry Latino family ahead of me, with adorable and funny kids to keep all onlookers entertained. In there and outta there in less than ten minutes — all of us. The pharmacist is the one who gives the shots. He’s a real AFRICAN African — Somali, I’d guess, but possibly Ethiopian. A beautiful person upon which to rest one’s eyes, and a very, very nice man…a guy who can shoot you up with a vaccine without you even noticing it. 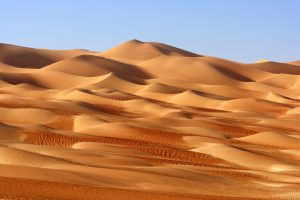 This visit evoked a moment of nostalgia: The single most beautiful human being I have ever seen an all of my 75-plus years was a Somali man who came to work for us while we were in Arabia. The Americans would hire local and immigrant workers — mostly Goanese, Pakistani, and Indians — to do housework. This guy was passing through, and somehow my mother hired him for a day or two of housewifely chores. His name was Musa. As he stood by the ironing board pressing clothes, I sat on the floor and played with my toys, watching him work.

He had come out of Africa across the Red Sea, and he had walked across the Rub al Khali to reach Ras Tanura, where he hoped to take ship and move on to some more desirable destination

Got that? Walked across the most gawdawful barren desert on the planet.

He was so handsome that he truly was beautiful: that is the only word for his appearance. He looked like an exquisitely realistic sculpture carved out of ebony, the blackest Black man you’ve ever seen. I was only about eight or ten years old, and so was not at an age to have developed any appreciation of the natural aesthetics of the human body. So you can imagine how striking he must have been.

Well, this pharmacist, while handsome enough (I guess), was not drop-down gorgeous like Musa. But he was every bit as spectacularly ebony. I imagine he or his forebears must have come from the same part of the world, at some point along the line.

Or…who knows? Maybe Musa made it across the Middle East, through Europe, and over the Atlantic Ocean. Maybe he landed on the shores beneath the Statue of Liberty, and maybe he built a family here. Maybe that pharmacist was Musa’s son or grandson!

2 thoughts on “Scored my fix!”