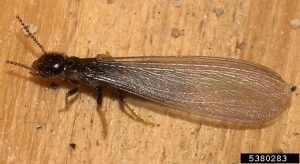 So Termite Dude showed up a couple days ago. Nice guy: I liked him instantly. He sprayed the new settlement our little ladies had installed in the attic’s wood facing, explored…examined…examined…explored, sprayed everything in sight, collected a wad of dough, and went on his way.

Gerardo had already  inspected the attic. Termite Dude went up there, too, and looked all around. He confirmed Gerardo’s report that as yet our little pets have not made their way up there.

Termites are a chronic problem in Arizona. That notwithstanding, I don’t have the house sprayed every six months, for two reasons:

The stuff we used to have sprayed in our house downtown (which was built atop a delicious wooden crawl space) used to make my stomach upset every time the guy came around. Did the same to the cats, too: they would barf all day until the fumes aired out.

One of my friends...omigod! Her health was permanently ruined (no kidding!) and her dog was killed when fumes from termite gunk an exterminator sprayed into the foundation (most houses here are built atop concrete pads, which have to be drilled to apply the chemical) found its way into a crack, seeped up into the home office where she was working while her dog snoozed on the floor, and poisoned both of them.

But with the gals having staked out a claim, I felt that if I had to take the dog and rent a motel room for a week while the place airs out, it would probably be worth it.

The new termite gunk, however, has no odor! At least, none that’s discernible to a human.

That alone was amazing. Then came the next surprise: it didn’t make me queasy! I did take Ruby down to M’hijito’s house and left her there all day. So, she wasn’t exposed directly to it. To what extent any odorless fumes may linger, I do not know. But it’s now been a day and a half, and she seems to be fine. No barfing, no listlessness, no other visible sign of harm. Yet.

This morning I realized that I forgot to point out the decayed remains of an old tree trunk out in front…which very likely is where Her Majesty and her minions originated. Dunno whether he sprayed that or not. But I happen to have half a gallon-sized container of bug granules, which probably will do the job on any ladies lurking around that grocery store. Whenever I get off my duff, I’ll go out there and sprinkle the stuff all over the pit.

Can you imagine? We didn’t used to have mosquitoes. Literally: you never saw skeeters around human habitation in this place.  Matter of fact, that used to be one of the draws: Michiganders and Ohians and the like loved the mosquito-free yards as much as they loved the warm winters. 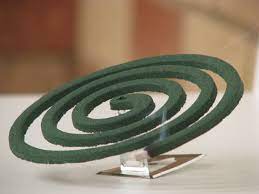 Dragged out the mosquito coils — there are only a couple left, so I guess I’ll have to order up some more from Amazon.

These damn things are, I’ll say, pretty creepy. First came upon them in Tahiti, where DXH and I stopped for a few days on the way to Australia & New Zealand, where he had always dreamt of junketing. Tahiti, being a jungle island in the middle of the Pacific, is overrun with savage biting mosquitoes. And yes, they do carry disease. The hotel provided mosquito coils for the guests, and yes, the things DO work to repel the little ladies.

Not nuts about using them in the house…but outdoors, they don’t seem to be too unsafe. During skeeter season here, I keep the screen doors and window screens closed, which works effectively to keep the gals out. But why would you live in Arizona if you didn’t want to sit on your garden porch for breakfast and dinner and cocktails, hm? These things make that possible in the springtime, the only pretty bug time…

1 thought on “Skeeters and Coils and Termites and Stuff…”