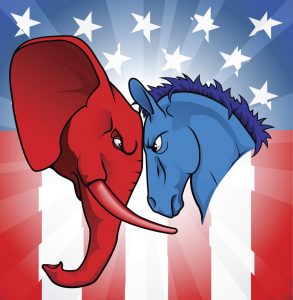 Hmmm…interesting election results. It looks like Americans are just about evenly divided on political issues, doesn’t it? Apparently Trump et al. have succeeded in annoying some folks enough to turn against the Republicans, but it’s far from a serious majority.

What worries me (among many things…) is that these results and the original Trumpite victory are just not getting the message across to Democrats. We have two parties who think God (in whatever form She chooses to take) is on their side — each party thinks it has the moral high ground. And neither side seems to be registering that they need to rein in their most extreme impulses and drive in the middle lane. So…I don’t see things getting any better. All that will result from salting the House with Democrats is that nothing will get done in any direction.

To celebrate the possibility that now the Democrats are in control of the House, they could indeed do in the Orange-Haired One, is to crow in mistaken triumph. Yes, he’s a bad fellow. No, he should never have been allowed to set foot in the White House. But impeaching a President of the United States is not, never has been, and never will be a good thing. No matter how incompetent or crooked the man (or woman) may be, removing a sitting President will guarantee resentment, rage, and chaos.

Let’s imagine the House finds, grâce à Mr. Mueller’s excellent work, that Mr. Trump is the creep, crook, and tyrant some of us think he is. Let us go so far as to imagine they not only prove this amazing revelation, they use it to remove the man from office. Then what?

Then we end up with Mike Pence as President. The man who cannot trust himself to go to a business dinner at a restaurant without taking his wife along to act as chaperone.

In the meantime, the hateful rhetoric continues unabated. Faux Gnus is probably right: nothing much will get done from here on out. Meanwhile, The New Yorker rants ecstatically that the elections were a “rebuke” to Trump…gimme a break. Daily life is a rebuke to Trump…BFD. The man is still in power, he will continue so for at least two and quite probably six more years, and he and his Russian pals will have two to six more years in which to foment hate. The Democrats, imagining that they’ve triumphed, will continue on their own benighted way, enraging everyone who stands to the right of, say, Harry Truman. Whaddayabet they install Nancy Pelosi as speaker?

We need a third party: the Party of Common Sense. So far, it doesn’t look like we’re about to get one of those.