In an idle moment, I happened to google the name of some long-dead relative, and lo! up came a bunch of interesting stuff, not just dry government documents but newspaper articles and obituaries written by surviving loved ones. Genealogical records tend to suck you in. Like history (of which, I suppose, genealogy is a branch), the stories of the dead can be hypnotic.

Fooling around, I had the idea of creating a table that would compare the family lore about people on my mother’s side with what appear to be the facts, as reflected in public records. And…whoa! This is when you begin to realize how curious are some of the things your relatives have said.

My father never talked about his family, most of whom he was alienated from or just didn’t care about. But my mother’s stories…oh, my! 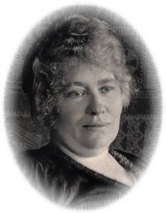 Gree, presumably in her younger days

One particularly memorable legend has it that my great-grandmother, familiarly known as “Gree,” was brought up by Mary Baker Eddy after her own parents died. This is why Gree was a staunch Christian Scientist right up to her dying day, at the (very active!) age of 94.

Think of that. She and her daughter both lived to 94, and they never saw a doctor in their lives. The evening before she died (of heart failure), she entertained a dozen people for Christmas dinner in her dining room.

Start to look into it, and you find exactly zero evidence that Gree ever came anywhere near Mary Baker Eddy during her childhood. Eddy lived in New England: mostly in Massachusetts. Gree was born in Battle Creek, Michigan, and as far as I can tell, lived most of her younger years in Michigan and Illinois. She married in the Midwest, and she and her husband moved to California after they were well into adulthood.

It is true that Gree’s mother died when Gree was three years old. However, the father lived another ten years. That would have left Gree unparented at the age of 13…but again, there is exactly zero evidence that she was ever sent East. And as far as I can tell, Mary Baker Eddy never inhabited either Michigan or Illinois. 😀

Okay. Yes. The Christian Science Monitor was founded in 1908. So…yeah. Could be.

Look into it, though, and you find their sole surviving squib in any CS publication was a testimonial to the miracles of Christian Science in The Christian Science Sentinel, which appears to have been a kind of propaganda bullhorn whose nature was akin to a newsletter.

None of this means they didn’t know Mary Baker Eddy personally. Surely one or both of them could have. But evidently my great-grandmother never spent any time as Eddy’s stepchild. Unless…she was sent east on an orphan train (at the age of 13? In the 1800s, when she would have been considered old enough to earn a living?) and nabbed as a free servant by Eddy. But there’s no word of this either in fact or in family lore. Besides, the orphan trains went in the other direction: from East Coast cities into the hinterlands.

Interestingly, in this testimonial Gertrude remarks that she survived typhoid(!) and appendicitis grâce à the miraculous qualities of Christian Science. She also remarks that her brother went to France during World War I.

Then we have the story of Gertrude’s brother, my uncle Albert, who designed the Morrison Planetarium at the California Academy of Sciences in San Francisco. We’re told that Al wanted to go to college but that his father refused to let that happen, saying no one needed a college diploma to earn a living. This, in the backlit haze of family lore, made Al’s accomplishments as an engineer and designer all the more astonishing.

Well. No. Mucking about on the Internet, what DO I come across but an article in an antique university newsletter indicating that at the age of 23 he was a junior at the University of Illinois, Champaign — majoring in civil engineering.

He was born in 1892. So if he was a junior in 1915, then he would have been a little old for an undergraduate. This could indicate that he didn’t start college until a year or two after he left high school. Or that he was working his own way through and so had to take a lighter than normal course load. Assuming he was able to carry a regular schedule of classes, though, he would have graduated in 1916. The U.S. entered World War II in April, 1917, and so it’s possible that he might have dropped out of college to volunteer for the war. But it’s just as possible that he finished his course of studies before joining up.

Whatever: this bit of intelligence gives the lie to the tale that he was entirely self-educated.

I have a cousin in California who converted to Mormonism shortly after he reached adulthood. He compiled a large genealogical record, we’re told, which in the first place would be lodged here in town at the Temple (and I do have Mormon friends who could get me in there) or which, in the second place, he may have information about. His sister, who lives in Fountain Hills, has completely alienated herself from me, for reasons unknown. Apparently I said something to offend her — what, I can’t imagine. My father had plenty to say about her conversion to Roman Catholicism, some of it extremely nasty — he was a bigot who operated in the highest stratosphere of bigotry, and if he made any of his remarks to her (God help us!), she no doubt thinks I’m just as stupid and vicious as he was. It remains to be seen if she passed this opinion along to her brother.

One would assume she did. But I figure it can’t hurt to try to get in touch with him. He can’t hit me over the Internet.