Yes, mirabilis! A miracle took place at Costco this morning, when I went over to the store on the fringe of Richistan to buy a $300 cash card with which to buy this month’s collection of goods, as per my latest budget scheme. As you’ll recall: the idea is to get a cash card that probably will cover a month’s worth of needed purchases and then STOP SHOPPING THERE if and when the cash runs out.

Because I had to buy a 50-pound bucket of chlorine pool tablets, I figured this trip would consume the proposed three hundred buckolas, and then some. 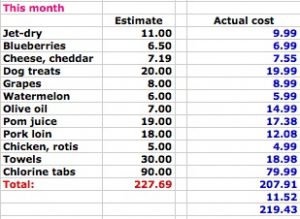 But…here’s the miracle: I actually overestimated what this month’s Costco shop would cost. I figured it would run about $230. Actually, knowing the way Life goes, I expected it to go higher than that. In fact, it was $220 — including a year’s worth of chlorine for the pool.

Without that once-a-year pool chemical purchase, a similar shop would have cost about $135, well under two hundred bucks.

This morning I bought a $300 card for in-store purchases and a $60 card for gasoline. Since I recently bought gas, at most I’ll spend only $30 of that $60…but possibly not even that. Last month the car ran for a full 30 days without a refill.

Reaching the La-La-Land budget goal of $1375/month is out of the question. Costs on the house plus doctor bills, vet bills, dentist bills, car mechanic bills, and whatnot push average monthly spending to $1750 a month. But even if that’s the case, in theory by sequestering Social Security and staying within that $1750 monthly goal, some 10 grand would be left to rebuild the now vacant Emergency Savings fund. Keeping Costco spending under $200 a month and not buying a lot of groceries elsewhere should go a long way toward making that possible.