So yesterday morning I traipsed to the credit union, whereinat to deal with the stolen credit, debit, and ID cards. Bob, the front man there, didn’t seem too worried. He said the steps I’d taken to inform credit card issuers and others involved should head off any attempts to hack into our accounts.

I had delayed telling my son about the credit-card heist, because I feared he’d have a sh!t-fit and there was a limit to how much I could cope with. But Bob felt no one would be able to get into our shared account for the mortgage, nor, he thought, would they be able to get into my new AMEX accounts or much of anything else. So that was reassuring. Sorta.

Meanwhile, now that I have a new AMEX account, I’ll have to tell every creditor who auto-charges on that thing what the new card number is, a prospect that exhausts me. Yea verily, yesterday Apple sent an email demanding that I enter a method to charge up a $3.25/year bill for use of their vast web space. I couldn’t make their guy or their machine or whateverthef^ckitis understand that they need a new credit card number and that is all they need. So next week I’ll have to drive way to Hell and gone out to the far west side, whence the Apple store has decamped, find a human being, explain what is going on, and see if THEY can re-up my subscription.

After fleeing the credit union, I stopped by the big new Sprouts near the university campus. It was quite a nice shopping experience…that store is larger than any of the other Sprouts stores I’ve seen here in Phoenix. Their produce is wonderful, they have drinkable cheap wine, and a wide variety of other loot. I came away feeling pretty pleased. 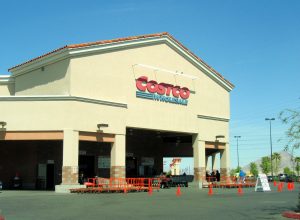 Which led to a rumination about Costco…  As in why am i PAYING to shop there??? Especially ever since they closed the store nearest to the ’Hood, necessitating a twenty- or thirty-minute drive across the city. I got everything I needed at Sprouts…and then some. True, at Costco you can buy clothing, shoes, sheets, towels, office supplies, and on and on. But hey! You don’t buy that stuff every week. And besides, if it’s something you really want, Instacart delivery is free for Costco members. If you sent an Instacart runner over there once every month or six weeks, it would pay for the membership…which is 60 to 120 bucks.

Sprouts has an excellent selection of drinkable low-rent wines — Costco seems to have gotten rid of all its decent brands in the $9 to $12 range. Sprouts has a much larger selection of fresh produce. And it carries CBD oils and creams, which go a whole long way toward soothing the peripheral neuropathy. A-n-n-d how crazy IS it to drive halfway across the city to stand in line at the pumps for twenty minutes so as to save a couple bucks on a gasoline fill-up? We have two perfectly fine QT’s right up the road, both of which generally undercut the competition.

So I think I’m going to shop a WHOLE lot less at Costco. Matter of fact, I may stop shopping there altogether.

1 thought on “Theft Damage Control: Battening down the hatches”