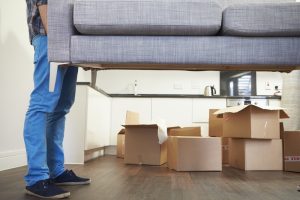 So I’ve spent the past few days helping some dear friends move out of their home of 40 years. They sold it, successfully, and now they’re moving into a very attractive and comfortable life-care community. I’d call it the Queen Mary on a Concrete Foundation…it’s quite the luxury liner.

These are folks who live a normal life in a normal home: they’re not what you’d call, by any stretch of the imagination, “hoarders.” They buy what they need. Over time they use it up and go back to Costco to buy some more of what they need. They have a lifetime of tschotskes of the sort that come to rest in the homes of ordinary people: pieces of cherished artwork (some of it valuable); several exceptionally handsome (and exceptionally expensive) lamps, the usual collections of dishes and pots and pans and glasses and whatnot; a computer and a desk and a filing cabinet and a TV and a couple of easy chairs and all those good things. If you were invited into their home, you would find it pleasantly middle class and comfortable.

But…my friend Ms. J has lived there 40 years. She and her late husband built the house all that many years ago. Mr. L, her present husband, married her and moved in heaven only knows how long ago — I do not, but can say they’ve been married as long as I’ve known them, which is some 18 years.

It’s a two-bedroom house, explicitly and attractively designed for an aging couple to spend the rest of their lives in. The late husband passed; she remarried, and now the two incumbents are in their 90s. They decided the wisest thing to do, at this point, would be to follow their friends into the environs of the upscale old-folkerie, where they will be cared for like passengers on some grand luxury liner until they shuffle off this mortal coil.

Sensibly enough, they signed up for a two-bedroom apartment, which they got. It’s a very, very nice place. And it appears, at a glance, to be about the same size as their long-time manse. It has two bedrooms, two bathrooms. A separate dining room, a nice living room.  A full-size kitchen. A washer and dryer. A truly spectacular view off the sixth floor. Three restaurants for you to dine in with your monthly chow allowance. Cleaning help included. A library on-campus. Clubs, activities, transportation…the certifiable Life of Riley.

A two-bedroom house with 40 years of seniority does not easily fit into a brand-new two-bedroom apartment.

The apartment doesn’t have a garage: the garage that has sheltered a lifelong accrual of collected valuables. And most to the point, the garage that housed a large upright freezer, the home of innumerable Costco Lifetime Supplies of various food items. Nor does an apartment have the kind of closet space and kitchen space offered up by a house, even a modestly sized house.

Much of the stuff that couldn’t be moved or that is now simply redundant will be offered up in an estate sale, getting it out of their hair, out of their adult children’s hair, and out of the movers’ hair.

What a job! Moving is always a challenge…but when you’ve been in a place for 40 years, it’s more than a mere challenge. “Ordeal” might be le mot juste.

I was reminded by this adventure of the many (many!) times I’ve held forth on the subject of decluttering, dating way back to 2007. And…then was reminded that I need to put my money where my mouth (or keyboard) is. It has been quite a while since I’ve shoveled out the Funny Farm. So this week, I think, I’ll go through the closets and toss out anything I haven’t worn (or wish I hadn’t worn…) in the past year. Also need to go through the garage cabinets, kitchen cabinets, and office closet to get rid of things I’m just not using.

This is a good thing to do whether you live in your shack until the end of your life or are forced to move to some place that’s easier or cheaper to care for.

Moving is difficult under the best of circumstances. But when you’re in your 90s and you’ve been accumulating stuff in the same place for the past 40 years, it’s quite the nightmare. Whether you move or whether you shuffle off  this mortal coil in place, leaving your worldly goods to your unlucky offspring, you need NOT to accumulate junk.

That was something my father the sea captain knew by habit, since most of the time he lived in a first mate’s or captain’s cabin on a tanker: i.e., one room. My mother also knew not to stash too much junk — and he wouldn’t allow her to — because they moved so often. But y’know…I’ve been in this house for almost 15 years and hope to live here until I die. Whether I get shanghaied into an old-folkerie or just leave this place to my son, it would be a good idea to clean out the unused junk now, while I still have the strength to do so, and then to make it a habit to throw out anything I haven’t used in the prior year. I sure don’t want my son to have to deal with shoveling out all the junk you can collect over a lifetime.

This month being January, a thought occurs: Why not designate January as THE annual decluttering month? Then you would be reminded to shovel out the redundant junk on a regular basis, instead of getting around to the job only when forced to it. January is a perfect time: right after Christmas, when you’ve presumably acquired some new junk to find a home for.

8 thoughts on “Use It Up or (Dammit) THROW IT OUT”