Ever have one of those why didn’t I think of that before moments, borne out of some altogether irrelevant little challenge? It’s like looking at something askance and spotting a detail you’ve been missing every time you stare straight at the thing. 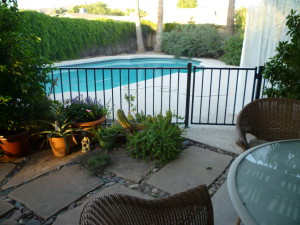 This morning I set out to soak the vines that grow in mounds along the Funny Farm’s back wall, by way of cutting the likelihood — however slim (or not) — of a fire starting in the dry stuff under it when the local yokels take to the alley to set off their illegal fireworks. My twitly neighbors, as you’ll recall, have dumped so much trash out there that Gerardo figured he couldn’t get it all in his (very large) trailer.

And our legislators, who by tradition indulge in stupidity that far surpasses mere twitliness have set things up like this:

• Confused about the difference between firearms and fireworks, they eliminated all laws and regulations limiting the possession and use of DIY fireworks, except the kind that rocket up in the air and create giant shows.

• When several cities stepped into the breach and banned certain types of especially dangerous fireworks within their city limits, our idiot legislators passed another law stating that cities and towns may not tell retailers that they cannot sell these devices, whether or not they’re illegal to use within the city.

• Thus, bang-bang enthusiasts run down to the local Albertson’s (ours has set up a tent in its parking lot for the sale of such toys) and stock up on fireworks of all kinds, including the ones that are illegal here in lovely uptown Phoenix.

• The enthusiasts, of course, know that if they’re caught shooting off a locally illegal firework, they’ll be cited.

• So, by way of avoiding a citation, they sneak into the alleys to set off their most dangerous toys. 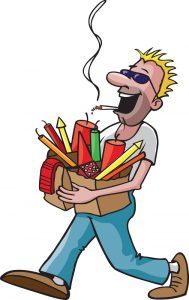 And of course, when you have oleanders or vines along your back lot line, or when someone has dumped a lot of dry trash in your alley, what you then have is a fire hazard. Wow! More than you might imagine: 18,500 fires per year, including 1300 structure fires, 300 vehicle fires, and 16,900 outside and other fires.

Personally, I would prefer not to see my home or yard be included in this year’s $43 million of related property damage.

By way of minimizing that hazard, my plan is to get those damn cat’s-claw vines soaking wet, so that by dark this evening they’ll be too soggy to catch fire.

The prospect of dragging the hose and a sprinkler across the pool and up and down 100 feet of back wall on a 113-degree day does not appeal.

But as I get started along about dawn, it occurs to me that one could take the soaker hose that runs along the base of the plants and lay it over the crown of the hedge. Then turn the timer to run as long as it will go — two hours — and let water drip down over the tops of the plants. This would obviate some hose-drag. At least it would allow me to escape having to haul the hose over and through the pool and physically tie the sprinkler to the top of the wall.

So I start to do that: disentangle the thing from the plants’ stems and lay it over the top of the vines. This looks like it’ll work, except…

Yeah. Except…the hose is so old that it crumbles as I handle it!

I manage to pinch off the broken end and get it to run well enough to see how this scheme will work. And yeah. It sure as hell will work. It delivers a load of water to those vines and it dribbles down into the insides of the vine cover. This means the most flammable parts of those vines get really wet. And they get wet with ONE hose-bib turn, not eight or ten hose-drags.

Not only is this working exceptionally well, it now occurs to me that it would be pretty easy to set this up as a permanent thing: instead of running the soaker hose along the ground…duh!!! Run it over the tops of the vines, where water will flow down over the plants and drip onto the ground where rain would normally drip: to the root area where the vines need to get water.

Those vines are looking a bit peakèd these days, partly because the 15-year-old drip system is failing in places, and partly because you can drip-irrigate until you’re blue in the face, but if you don’t get some rain, drip irrigation does not suffice to keep something like that alive forever.

And we haven’t had rain in years.

So…why not add some fake rain?

• One short length of regular hose: on hand
• Double-outlet hose bib: on hand
• One 100-foot or two 50-foot lengths of soaker hose: HD is open today
• One hose timer: on hand

So whenever I get around to it, I’m gonna run up to the Depot and pick up the proposed soaker hose.

This is going to be great. It will make watering those damn vines one whole lot easier. Right now it’s a hassle, because I have to climb under eye-poking shrubbery to connect the backyard hose to the soaker that runs around the back of the pool, and that doesn’t reach all the way along the back wall, so a hose-drag is required to reach the whole “hedge” of vines. It’s such a PITA I tend to put it off until it doesn’t get done at all. With the drippers working poorly or not at all, that means the vines are dying back because, lacking any rain, they don’t get enough water.

And with the two-hole hose bib, I can run the short, unused length of hose sitting in the storage shelves over to the soaker hose connection and just leave it there permanently: never have to connect, disconnect, and drag the hose again!

It seems so obvious. Why didn’t I think of this before?

4 thoughts on “Why Didn’t I Think of That Before…”