This afternoon I stumble out into the front patio and find, perched atop the wall, my brand-new 2022 calendar. Apparently several days ago I must have carried it out there (why??? when????) and then carelessly left it sitting out in the weather.

And weather we had: two days of intermittent rain. The thing is drenched and dried, all wrinkled up, the entries I’d inked in melted.

Not to repeat my idiot self, but why?  Why did I do this and when did I do it and why did I wander off and leave the damn thing sitting out there?? A-a-a-n-d…how did I forget it for several days? It’s been two days since it stopped raining.

Come to think of it…did I take that latest load of clothes out of the washer?? 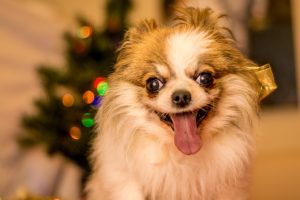 Out this evening with Ruby the Corgi, for a half-mile stroll a-eyeballing the Christmas decorations.  The young people who have moved into the ’Hood have run AMOK with the Christmas lights, and it is a hoot!  Almost every house is cascading in lights.

Mine isn’t, alas. I’d love to decorate the house, but there is no way in Hell (or in some manger, either) that I’m gonna climb up around the eaves and the roof and the tree branches…not once but twice, first to get the stuff up and then to haul it down and put it away. But that Scroogification doesn’t stop me from enjoying the fruits of other folks’ labor.

Ruby, being a dog, loves a doggywalk. And like her larger cousins the German shepherds, she’s interested in clearing the land of other dogs. 😀

Dog-lovers just do NOT get it when you tell them to keep their pooches away from your cannibalistic canine. Godlmighty, but people are stupid.

This afternoon we were walking in the park and came upon some nut case who had a squeaky toy, with which she was trying to lure Ruby over to the park bench where she and her dog had taken up residence. I had to make a long detour around that nitwit…she saw me trying to avoid her, which of course led her to squeak squeak squeak all the more vociferously.

Ruby, like Anna the German shepherd, is inclined to bite other people’s unrestrained dogs. Anna truly desired to kill them. What Ruby has in mind, deep in the depths of her canine soul, remains unclear. And I don’t wanna find out. The thing is, people are so effing STUPID about their dogs — and about your dog — that you just can NOT convince to keep their animal under control. When you ask them to call their loose dog or keep a grip on a leash, they’ll simper and coo “ohh don’t worry, they just wanna plaaayyy!”

Right. If removing your dog’s head is play, no doubt that’s so…

l think this murderous streak is characteristic of herding dogs. Though a corgi is little and fluffy and cute and looks a whole lot like a stuffed animal, the fact is they are bred to herd livestock and kill rats and foxes. And another fact is, they regard their humans as sheep, which must be protected and guarded. In that respect, they behave very much like German shepherds.

Later this afternoon a lady walked by on the other side of the street with a little white dog on a lead and a funny little black dog following her. Turns out the li’l black dog had been wandering loose and decided to adopt the woman. When Ruby tried to catch it, I realized it belonged to the neighbors cattycorner across the the street. When Joel (dad neighbor) heard the commotion, he came over and retrieved his funny-looking pooch. Very silly. 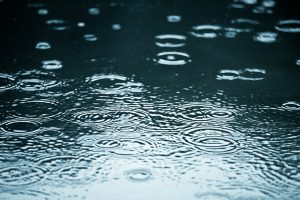 Soooo many things the decrepit brain spins its gears on, though! The rain-soaked calendar is the most egregious…of today, that is. This morning I realized I’m going to have to make a whiteboard list of all the things that need to be done, every day. Because…I can NOT remember them!

Today I noticed I hadn’t paid the Cox bill and one of the other recurring nuisances. Most of the utility bills are set up to auto-pay, but Cox is…welll…not what one would want to trust to get things right. So I feel a need to SEE that worthy corporation’s bills before letting go of the cash to pay them.

This, of course, requires…well…actually LOOKING at the bills. Which I failed to do this month.

Got that straightened out. But meanwhile the credit union has fancified its sign-in procedure, adding yet another layer of difficulty to hassle with. So that was frustrating and annoying. I may be reduced to having to pay recurring bills with checks again. Which is NOT a good thing, IMHO.

Then we had another Old-Lady Fret-Fest over the need to make at least one grocery run between now and the Christmas shopping frenzy. I’d figured I’ll go over to AJ’s on Friday afternoon.

All day today I’ve been thinking this is Thursday afternoon.

Right. That’s even though I spend every Thursday afternoon twiddling my thumbs in the church office!!!!  Why on earth could I possibly imagine today is Thursday and so I shouldn’t have to charge out into the traffic?

Along about two o’clock I tumbled to this little fact of life…just as I was about to fix the decent meal of the day. Dayum!!!! Drop everything, jump in the car, trudge through the traffic to the store, fight the crowds, trudge back…arrrhhhggghhh!

Just as I’m scouting up the car keys, it dawns on me: Hey, stupid! You can send Instacart to do that!

So tomorrow morning I’ll send an underling out to buy what I need to last the 10 days or so until the Christmas shindig. That will relieve me of a great deal of Christmas-Rush Hassle… But the question is, why on earth would I forget all about Instacart, when I was using them about once every week or ten days for a couple or three months? Mothballs in the brain?

I suspect this abrupt influx of senility reflects a combination of advancing age, chronic low-level pain, and the endless isolation brought on by the accursed plague. Ever since the disease descended on us — what, two years ago, now? — I have had almost ZERO social interaction. With anyone. Choir shut down. So did the church, more or less. WonderAccountant and I stopped going to concerts. My son is locked in his house, telecommuting. And of course you couldn’t get me into a classroom on a bet. Or on a lightrail train. Or just about anywhere else. Almost all my human interactions have taken place in doctor’s offices, dentist’s offices, and (occasionally) grocery stores. 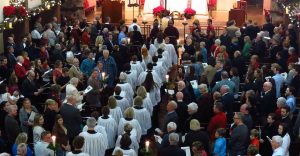 Scott, our beloved and retired choir director, is guest-conducting this week. We’re supposed to meet tomorrow morning for rehearsal. But alas…I would not risk my life to sing in a church, not on a BET. Choral singing is about the most dangerous thing you can do during a contagion. And given my amazing susceptibility to respiratory infections, you may be sure that if I catch this thing, it’ll be the end of me.

They’re saying the Pfizer shots are about the most effective vaccine we’ve got…but truth to tell, that’s not very effective. Apparently the omicron strain has found its way around all three vaccines, though the Moderna version was evidently pretty useless from the git-go. I’ve had three shots from Pfizer…but still…do I really want to tempt fate so I can sing a few hymns in a church choir?

Mebbe not so much…

2 thoughts on “Another Fine Day in Solitary Confinement”