Yarnell dreamin’ again: I have SO had ENOUGH, already(!) of the gawdawful racket that comes with living in the lovely city.

The damned helicopters are hovering over the freeway, where some guy rolled his work vehicles and dumped nails — yes, NAILS — all over three northbound lanes. They’ve got the freeway shut down and are routing traffic up Conduit of Blight Blvd to Gangbanger’s Way, creating a massive rush-hour traffic jam. This would be a massive jam if it weren’t 7 in the morning. It’s hard to imagine what a mess they must have just now.

I hate this racket. The sky is not supposed to roar. We were told the damn train boondoggle would be quiet (it is not). Between the cops and the ambulances, this area never is free of sirens howling.

Y’know, I love my house and my yard and my neighbors, but when you can’t enjoy the place because the ambient racket hurts your ears, you have to wonder why you’re staying. Especially with the city about to institute yet another scheme to dump transient drug addicts in your lap.

Interestingly, housing prices in Tucson are somewhat lower than they are here. I was surprised to learn this. The Oro Valley, an area on the northwest side of Tucson, has the lowest crime rate in the state, and yet the housing prices are similar to those in my part of the ’hood. 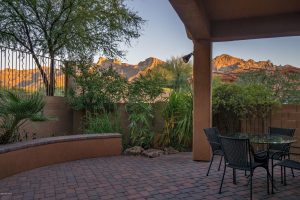 Tucson is surrounded by mountain ranges. If it weren’t for the city, it would be an exceptionally beautiful spot. Check out this little hovel, for example. How would you like that view off your back patio? I don’t much care for the late-model architecture — detest walls that don’t come up to the ceiling and dust-catching “plant shelves” — but one could live with it if the place were quiet and the views spectacular.

For what I could net on this house, I could buy a comparable place in Tucson, on acreage. There’s an area called Casas Adobes with houses whose vintage is more my speed. This place, for example, could be made more or less acceptable simply by getting rid of the owners’ ugly furniture. It’s cheap enough (if $312,000 can be called “cheap”) that I would come away with an even trade, after the expenses involved in unloading my house.

Problem with Casas Adobes, I suspect, is cued by those bars on the windows. Almost every house for sale in that district has bars on every window and door. And that’s telling you they have a crime (and probably a transient) issue. Trulia’s crime map makes the Casas Adobes itself look OK, but the area just to the south is not good at-tall. Well. The “area just to the south” is the entire city of Tucson. Which is, it must be admitted, mostly Chez Pitz.

On the other hand, the advantage of Tucson — as compared to lovely Yarnell or Prescott or Wickenburg — is that it is a city. It has a cultural life. In fact, because the University of Arizona (which resides in Tucson) still resembles a real university — as opposed to the learning-factory model of Arizona State — the university does support quite a vibrant cultural life. Tucson also hosts a major medical center, with one of the only top-ranking hospitals in the state. Tucson has a church, St. Phil’s in the Hills, whose music program appears to be similar to All Saints. Probably not as large or as elaborate. But there it is. None of those things hold forth in little burgs around the state.

Something to think about…