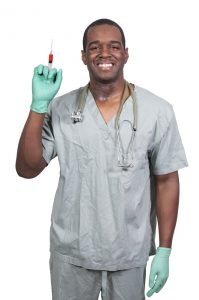 Holy mackerel, did that shot make me sick! If the extortionate price doesn’t make you sick, by golly, the vaccine itself sure will.

Growing up on the shore of the Persian Gulf, about as third-world as you could get in the 1950s, I enjoyed a lot of shots. Every malign disease known to prey on personkind was endemic in Arabia, and Americans living there had to take shot after shot after shot after shot. Every six months, I was hauled down to the hated clinic for yet another round of jabs: typhus, typhoid, cholera, tetanus, diphtheria, smallpox, whooping cough… They didn’t have polio shots yet, so whenever there was an outbreak, every kid in camp was dragged down to a portable and stuck with a vialful of gamma globulin — and lemme tellya, that stuff hurt! Of the routine shots, though, typhoid and cholera were probably the most painful.

But none of them hold a candle, for lengthy acute aftereffects, to this accursed Shingrix concoction. Holy shit!

Administering it is actually not very painful. But shortly after it’s been pumped into a muscle, your arm starts to hurt magnificently. This spreads up your neck, across your shoulders and back, down into your legs. Before long every muscle in your body aches. And your head? Wow, what a headache!

Unfortunately, I can’t take aspirin, ibuprofen, or acetaminophen. So these little aches and pains are just something I get to enjoy.

Hardly slept at all last night. I probably fell asleep for about an hour around 1 or 2 a.m., and that was it.

Then this morning I had to get up, climb in the car, and traipse across the city to the dermatologist’s office, south of Sun City(!!). At 9 a.m., the rush hour is still on…so that was jolly fun. Really, I shouldn’t have been driving the car at all, that’s how sick I was. BUT…I managed to shoehorn myself in to the doctor’s schedule  this a.m. to have them look at a recrudescence of this damn thing on my hand. They insist it’s not growing back and that it’s healing up. Yeah. Right.

Soaking in a hot bath for awhile helped some — which was surprising, since the stuff made me feel like I had a fever of 110 and I thought what was needed was cool water. But it’s damn cold in the house — we’re having some kind of a cold snap — and I just couldn’t force myself to stand in a cold shower. Surprisingly, the hot water helped.

That notwithstanding, I still hurt from stem to stern by the time I had to roll out the door.

God, how I hate driving in this city! It’s just like Southern California now: mile on endless mile of bumper-to-bumper, aggressive traffic through tracts of ticky-tacky housing and shoddy strip malls. And wherever you’re going, you can’t get there from here without an endless trek. Horrible place!

To get out of the ’hood, I had to pull an “Arizona turn.” That’s when you dart out in front of traffic bearing down on you from the left, floor it to keep from getting hit, veer into the center turn lane, and make a Uie. This was the only way I could turn west on Gangbanger’s Way this morning. Ultimately, I had to do two Arizona turns: one to get out of the clinic’s parking lot and turn east to come home.

You wonder why I insist on a six-banger? Yeah.

All that notwithstanding, I was happy to be able to get a vaccine that at least has (heh!) a shot at providing some protection from shingles.

Shingles is decidedly not an ailment you want to enjoy. 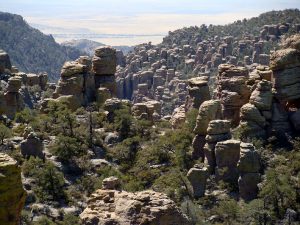 Some years ago, I met a woman in Portal, a little dump in the Chiricahua Mountains. The Chiricahuas host a research station run by the American Museum of Natural History. It’s quite a place, and it attracts droves of high-powered scientists. These folks arrive there and fall in love with the place. The Chiricahuas form what is known locally as a “sky island”: with its own ecology, the area looks much like Bali Hai.

As a result, a number of very high-octane scientists take up temporary residence in Portal, and some of them retire there. This woman and her husband were among those who decided to retire. They built a home in a beautiful little canyon and took up bird-watching.

Shortly after they arrived there, she came down with shingles. A bad case of it. By the time I met her, she’d had it for two years, and it wasn’t getting any better. It had wrapped itself around her torso, so that she could not breathe or move without constant pain. About all she could do was huddle on the sofa, trying to stay still. She was, in effect, crippled.

At that time, there was no immunization for shingles. If you’d had chicken pox and you were pushing old age, you had a good chance of getting it. In fact, one in three older Americans get shingles. Some, obviously, are not as severe as her case. But…there’s no way of knowing who is going to get a crippling vase of it and who is gonna get off light.

I remember looking at that lady and thinking, holy shit! whatever you do, DON’T GET OLD!

Well. The alternative is fairly drastic, and so far I haven’t felt inclined to take advantage of it.

So even though the present episode was a passing miserable moment, and even though I’m really pissed that something so important to public health should be priced exorbitantly and not covered by Medicare D, I’m really, really glad to live in a time where the shot is available.