And so it was off into the rising sun… 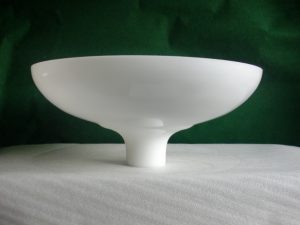 With a printout of a candidate glass lampshade from the Lamps Plus manager, along about midmorning I set out for Phoenix Lamps, a venerable shop that has occupied the same hole-in-the-wall on east Indian School Road for years. Nay, decades.

This is not a place to which I would normally avail myself, because years ago — yea verily, decades ago — their staff was unforgivably rude to me. Never have I returned, and never did I intend to return. But the Hinkley’s lady and the Lamps Plus lady assured me that the joint has changed hands, and the new proprietors were capable of behaving themselves as if they cared whether customers ever came back.

Welp…they’re right. Staff there were visibly human, and they managed to be very nice to me, despite the crankiness of my quest.

Traffic, though? Not so much. I dawdled until around 11 a.m. before dragging unhappily out the door. That was a mistake. Traffic in all directions, on all routes was just effing fierce. What are all these clowns doing out on the roads in the middle of the effing morning?

The store was busy — several parties perusing every item in the store. This would explain why the slot I hogged was the only parking spot left behind the place. But despite the demands on his time and attention, the guy I met up with was very kind and very knowledgeable.

Upon inspecting the wounded Restoration Hardware lamp, he agreed that the proposed replacement glass thing suggested by the Lamps Plus manager was probably the best bet. That notwithstanding, he hauled out a gigantic Sears-Catalogue of the lamp industry and searched. And came up with the same choice. But, he allowed, this thing was not a-gonna fit in the RH lamp: it probably would be too short and too loose. However, his crew could fix that: they could build up the base for the thing and adjust it so the proposed shade would sit there with an adequate degree of stability.

So, he suggested, I should order this thing online, bring it and the crippled lamp in to the shop, and they would make it all work.

Holy mackerel. If the gods aren’t snickering, they surely are smiling.

From there, it was off to the Trader Joe in Town and Country (20th Street & Camelback)…after a lengthy wait until the disabled lady who kindly blocked the entrance and exit to the Phoenix Lamps parking lot with her van reached a point where she felt inclined to move the thing. Staff were not inclined to demand that she get off the dime, so this took awhile. Didn’t bother me — I had nothing else to do — but some customers were a shade miffed. That notwithstanding, staff steadfastly demurred to the lady in the walker.

Town & Country hosts the snootiest and the snobbiest of the Biltmore nouveau-riche set, and by the time I got there — the lunch hour — the twits were out in force. Parking-lot challenged? Lemme tellya… Fortunately, I prefer to walk a ways (exercise, ya know) and I am…well…assertive. No. Of course I’m not aggressive. Who, me? 😉 I manage to shove the mini-SUV into a spot and hike in to the annoying Trader Joe’s.

Really. Was there some reason I didn’t go to Sprouts, where low-brow types like myself belong? Oh, yeah: the insufficient parking lot. Ohhh well…

The place was simply mobbed. Riots of shoppers, fighting kicking and biting to get at the desired products. Some poor lady was there who had a toddler that…well, the child had simply effing had enough of this bullshit and, trapped in a shopping cart’s kiddie seat, was SHRIEKING HER FRAZZLED LITTLE HEAD OFF.

I grab the stuff I need, one item I don’t need, and learn that no, of COURSE no self-respecting TJ’s carries anything so déclassé as chocolate chips. Pay. Out the door. Back across the hectic parking lot. Into the car.

And there have to do to-the-death battle with the young, the rich, and the overprivileged just to get out of the fucking parking space.

No joke. Between the parking space and the lot’s exit, three different privileged goddamn wretches deliberately cut me off.

God, but I hate rich people.

Having been a rich person for a significant slab of my life, I can say that. F*ck you all, Rich Wretches!….

Westward on Camelback toward the poor folks’ district. Stop off at Total Wine to pick up a bottle of Everclear, which is damn-near pure ethanol.

Don’t drink this stuff, please. It’s grain alcohol and very much of it will make you plenty sick, if it doesn’t kill you. What it kills even more effectively, though, is microbes. Back a few months ago, I learned (purely by serendipity) that it’s about the most efficient killer of MRSA bugs that you, I, or our doctors can get ahold of. I want some more of it, to use as an antiseptic.

The plonk acquired with surprisingly little hassle, it’s back on the road, headed for AJ’s. My GOD the traffic! Bumper to angry bumper to frustrated bumper to lunatic bumper.

Because I stay off the roads during the rush hours and the lunch hour, I haven’t seen mobs of cars like that in years. And hope not to see them again, unless some taxicab or Uber driver is doing battle with them.

Finally crawl into the AJ’s parking lot. Park a good hike away from the door. This, too, is a purveyor of goods favored by the Rich and the Rude, so navigating their parking lot when it’s full is…well…an adventure. Grab a few goodies and lunch, fly out the door…and find myself once again jousting with The Entitled. One sh!thead cuts me off at the exit, so I veer around him to the other exit and get onto the road before the SOB can. Mwa ha ha!

Driving in Phoenix: a competitive sport.

On Central, too — northward into an upscale residential district — the road was just packed. Managed to veer over to 7th Avenue, which for reasons incomprehensible was much neglected, and shoot up north to the ‘Hood, relatively unmolested.

Yea verily, back at the Funny Farm. Lampshade thing ordered. Chow scarfed down. A third of a bottle of white wine swilled. And now…enough, already! The dog and I are falling into the sack for a nap.