Time to sit down and swill a nice glass of Kirkland’s best.

The days swirl past like water flowing down the drain. And at this age…well, that’s a pretty apt metaphor. It’s been a very busy few hundred hours of late, some of them fun and some of them not so much.

Today started out pretty fun: A special choir session in the morning, in which we got some extra-special coaching from our professional musicians, met some new choir members, and had ourselves sorted out by timbre and reseated here, there and yon.

Even though one must yodel all by oneself, in public before an audience that does include the aforementioned professional musicians, I always get a kick out this process. It usually results in a set of new seating companions, which is cool because it allows me to get to know more choir members…otherwise, being the recluse that I am, I would cling to the few friends I’ve made and never get to know anyone else. So this is good. One of my favorite Chamber Choir singers is now seated to my right, a lovely singer with a wonderful, effervescent personality who seems, unlike moi, to be afraid of nothing and no one. To the left, a quiet woman who has been around for awhile but whom I’ve never had (or made…) an opportunity to come to know. AND we’re right down in front, meaning no climbing up and down and balancing on bleacher-like things. It’ll be a little harder to see the director from the new vantage point — and that is something I rely on simply because I’m just not that experienced, as singers go. But I think as long as we’re standing, it’ll be OK.

Yesterday was a bitch, as it developed.

Last night we finally moved the current wave of copy back to our journal editor. But not without a fiasco of the first water.

Working on revamping the Plain & Simple Press website and not making much headway, I’m figuring it’s about time to knock off and go do the day’s required fucking blood pressure test. This is the best time of day, when the numbers are at their lowest ebb…and that is a desideratum, because we wish to keep Cardiodoc at bay. I’ve not yet taken a pill, but it’s about time because part of the gaming of the system entails dropping one of these minuscule doses, waiting about an hour, and then running the hated gadget. This results — well, unless the ambient temperature is in the low 60s, as it can be — in a fine set of numbers in the mid- to low 110s.

Impressive. Very impressive. If that doesn’t get the guy off my neck, nothing will. 😀

Just as I’m thinking Get up, lady, and drop a pill, in comes a message from The Kid: where is Essay 4?

Essay 4? It’s on DropBox, in the Essay 4 folder. Of course (just unwittingly typed that “of curse”). Where we put it several days ago, and happy we were, indeed, to see the end of that fine document. 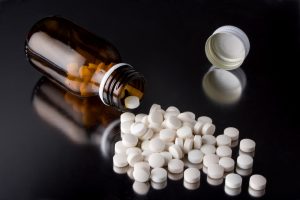 You understand: some of these authors are using their gilded efforts for P&T (promotion and tenure reviews). In its current incarnation, the journal seems to be absent anyone who even vaguely resembles a peer reviewer, nor does the copy seem to have benefited from the advice of an editor who is, shall we say, gifted with a jaundiced eye. The new editor appears to be inexperienced with wrangling creatives or unwilling to ride herd on the livestock. Articles are difficult to read primarily because they’re far from ready to go to press.

That is about the mildest I can get on this subject. And yes. I do remember my mother inveighing about “if you can’t say anything nice…” You can’t.

No, says The Kid. It is not on DropBox. Where is it?

Where, indeed? WhereTF? I search DropBox: and I know that is where I stored it because I no longer stash this stuff on my local disk. DropBox has a back-up/restore function, and supposedly Time Machine is also backing up DropBox.

She’s right. It’s gone. I search “All Documents” on my MacBook. 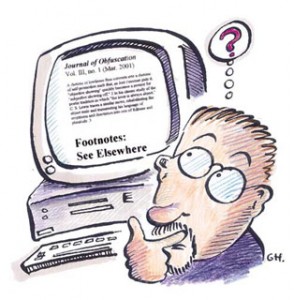 I fly to the big computer, fire up Time Machine, and search directories going back a week.

By now, I am seriously freaking out.

I break into DropBox’s website, parse my way through the nightmarish techno-instructions, and search DB’s back-ups.

Holy CRAP! This file, which was utter diabolical torture to read, is flat-out fucking GONE.

I email The Kid and tell her I’ll have to plow through the whole.god.AWFUL.thirty.god.DAMNED.pages again, which will take another full (agonizing) day.

So I go to open the hideous unedited original in Wyrd. Of course, when you open Word it proposes to “Open Recent.”

Hmmm….  No sign of the missing files in “Open Recent.” But what do we have at the bottom of the “Recent” list but a MORE tag….ah, yes.

Click on that. Select “this week.” Wait for some unholy number of files to register in Wyrd’s memory.

There the little bastards are!

The things are stored in a folder — that would be a “directory” for grown-ups who use Microsoft Windows — with a title that is a long, arcane number: D123455432211 or some damfool thing. Both of them: the clean edited copy and the marked-up copy.

Not caring much until I can contrive to open the things and then save up to DropBox, I stash the files, open them, and confirm that yes, they are the edited and clean versions. These, I mail to The Kid and to myself, by way of ensuring that they will not get “disappeared” again.

Whatever a D123455432211 is, I’ve never seen anything like it. Search the Internet. Whatever terms I dreamed up, at this moment I do not recall…but something that I typed into Google called up the answer. As it develops, when someone sends you a MacMail attachment and you open the damn thing, MacMail will save it into a “Downloads” folder. It does not prompt you to save the file where you want it to go. It just quietly saves in some un-findable location where Apple wants it to go. To make it even more un-findable, MacMail will designate this folder with a zillion-character numeric title.

By the time our author’s fine piece of literature has resurfaced, I am simply beside myself with rage, frustration, and horror.

Not only have I neglected to run the damn blood pressure machine, by now I’m about 5 hours late in taking the hated anti-hypertension pill. Along about 11 p.m. I gulp down the drug and test the BP. Really, it’s not that high: in the 130s. One figure is in the dramatically high 130s; the rest are in the middle range. The last time I flew into a state of Extreme High Dudgeon, the gauge reached 165/105, presumably in the bust a blood-vein category.

Unfortunately, in the brave new world of the American Heart Association, anything above 129 is now regarded as “high blood pressure.”

Questionable though I suspect that to be, nevertheless Cardiodoc takes it as received wisdom from Rome. So sticking those numbers in the record is contraindicated.

This evening they’re back down into the 110s. Those, we keep.

That notwithstanding, I’ve spent a fair amount of today rebuilding the Plain & Simple Press site so that I can offer content from two completed books and one work in progress for free to readers.

This required a refresher course in rudimentary coding. Needed to figure out how to build an internal link in a web page. You understand: once, back in the dark ages, I knew how to do this. That was when my mind was young and elastic. Today: phbphphbhphphbbbt! I do not want to know it and so I have forgotten all that arcana.

Okay. I now know how to do it. Again. Probably will not remember until tomorrow. But for the nonce, code that can be self-plagiarized is installed in one of the new pages under construction.

I should take the dogs for a walk, it being not even 8 p.m. Exercise is needed for dogs and for human. But…

One is given pause.

An admired friend of mine, one of the most elegant European women I have ever met, lives within walking distance, in a tiny development of patio homes that fronts right on Central Avenue. This is within easy walking distance of the Funny Farm.

She reports that a couple nights ago someone came to her door about 9:00 p.m., rousting her from whatever she was doing and alerting her German shepherd. Fortunately she has a steel security door.

When she opened her front door, she found a guy on the other side of that security door foaming obscenities at the mouth and waving a gun around. He was in some kind of rage, he was trying to get in, and he threatened to shoot her.

She being a woman of some self-possession kept her cool, closed the door on him, and called the cops. He was gone by the time the gendarmes showed up. But as you can imagine, she was somewhat alarmed.

She speculated that he was a transient, as he was dirty and probably high on the usual drug of choice in our parts — meth.

Well, I walk these dogs at night all the time, partly because in the summer it’s the only time they can walk on the hot pavement and partly because I’m busy from dawn to well after dusk. I never see anyone — sketchy or otherwise — wandering around after dark here. The bums are sleeping in the alleys, and the residents are nailed to their TV sets.

But just now I think…maybe not.

If there’s some drug-addled animal out there waving his gun around and threatening elderly women, I really do not want to meet him at night. Not in the daytime, either, but especially not at night. My gun is heavy and I do not even know where my father’s holster is stashed. Nor do I especially fancy the prospect of keeping two wackshit dogs under control while I try to defend myself against a wackshit human.

And so, to pour another glass of wine. 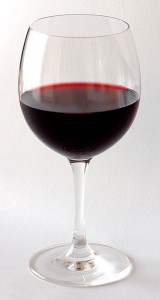