So today I spent vast numbers of hours trying to clean up the mess that is my pile of unpaid bills and adapt to the CU’s horrible wondrous new website.

At one point…well, I wanted to sit on the bed to do this project, partly so I could put my feet up and partly because the bedroom is one of the coolest rooms in the house. Upshot of this strategy: at one point the bed was PILED with stacks and stacks of file folders and loose papers and unopened envelopes my gawd!!!! It took hours to plow through all that stuff, and I’m still not done. I’ve still got to figure out the auto-pays, of course. Plus there are a bunch of unexplained pieces of paper whose significance remains to be explored. Plus of course with this new system I can’t see anything at a glance. So in the future, every time I pay a bill I’m gonna have to make myself remember to scribble PAID on the piece of paper.

I’m thinking what I may have to do, actually, is go back to paying routine bills with paper checks. PITA, but at least the bills can be paid, even if your beloved computer is offline. I’ve always suspected that relying on bank or CU websites to make your financial transactions is a bad idea. But…inertia always wins. Once you get started doing that, your inclination is to keep doing it.

Yeah…just when everything is making you want to BITE, what could possibly take the cake by way of ending the day?

Well. Of course: Rattie! It looks suspiciously like she’s decided walk right in and set right down.

We hear a bunch of rustling and scuttling of little clawed feet. At first I think WTF is that dog doing? Then I realize she’s doing nothing: she’s snoozing in her nest in the back bathroom.

I wake her up, telling her that Rattie is in the house. Ruby is pretty well trained now to chase rats, which she apparently thinks are sleazy-looking cats. But…

So I’m the first to figure it’s not much of a burglar. Get out to the front of the house, whence the rustling emanates, and find…no burglar. If the scuttling of little claws is not Ruby, then who else could it be?

Retreat to the bedroom to wait.

I carry her out to the front of the house. She’s actually, hevvin help us, shivering.

Put dog down. Dog flees to the back bathroom, hides behind the toilet.

Walk back out there and look around. No rat. Hm.

Scuffle scuffle…from the family room…from the fireplace. Ah! Rattie must have gotten in by falling down the chimney!

Explore. Peek behind the fire screen…and…and…

There inside the fireplace is a tiny little dove! 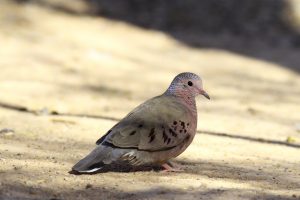 It’s a ground dove. It must have slipped and fallen down the chimney while it was scavenging at the seed feeder.

Take a lid from a wide-mouthed jar, pour a little water into it, and set it in there.

Is she too badly wounded to move around?

Nope…turn away and she takes off, flapping frantically in a desperate frenzy. She makes it to the kitchen. I open the kitchen door and also the sliding door. Not innarested.

Now she’s come to light atop the stove. I put a few seeds up there for her — she lets me get so close that if I were a whole lot faster than I am, I could grab her. Put the water thing on the counter. Shut off the AC (it’s effin 103 right this minute), as dusk fades toward (hot!!!!) darkness. Open the kitchen door, the patio door, and the west side door. Walk in and out the kitchen door, hoping that a bird is smart enough to realize that if a human can walk through an opening, said bird can fly through it.

Assuming it hasn’t injured itself so badly it can’t fly.

Well, we know she was able to get on top of the counter where the stove is. So she can’t be completely crippled.

It is, however, getting too dark already for a diurnal bird to navigate. So one doubts that she’ll bestir herself to go out. And if she does, her chances of survivng the night are…somewhat diminished.

Think o’ that, though… I have a watchdog that’s afraid of a six-inch-long bird.

Liberty Wildlife opens on Sunday, believe it or not. 8 a.m. So if she doesn’t get her birdly act together enough to slip out the back door pretty quick, I’ll call them in the morning and maybe will be able to get someone to help catch her. Or at least take her in, if I can catch her.

2 thoughts on “A Dog and Her Burglar”