{chortle!} That was the slogan of a long, long-ago governor of Arizona, a classic specimen of the state’s political fauna. The guy had been a radio announcer before he rose to the state’s highest office. He was a bit of an ignoramus, a good ole’ boy who may or may not have feigned that style. As it developed, he was far from the most stupid of the critters we have elected to public office. Evan Mecham took that cake. Ev was the Donald Trump of the Southwest.

Ev was so flamboyantly bizarre — and so excessively stupid — that nobody wanted to miss a minute of the sideshow. We all — every citizen of the state — went out and bought these tiny portable TVs (this was long before the day of cell phones and Google News), which we toted into the office with us. It took a year and four months to shovel him out of office. He was impeached in April 1988, when he enjoyed a criminal trial for his efforts as, uhm, governor.

It was hilarious while it lasted. But then…to have a fool for a governor is a bit different from having one as President of the United States, hm? 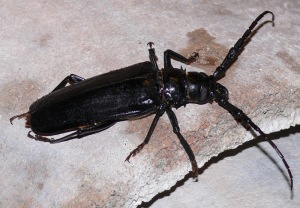 In less laughable climes: Just found two (!!) emergent holes of paloverde beetles under one of the beloved Arizona sweet orange trees. The monsters love citrus as much as they love paloverde trees.

That tree was peakèd this spring, so I suspected something was up. (Or…down under.) Citrus trees will go “off” once every few years, look sickly, and produce rather sad fruit. Then they revive the following year. It’s as if they need to “rest” every now and again. But I’m afraid the present anemia resulted from its roots being eaten by these goddamned bugs’ grubs, which live most of their lives underground — about 8 years. When they emerge to breed, they’re at the end of their lives — they only last a few days above ground.

Control is extremely iffy. We might say “feeble.” Virtually nothing kills them. Some years ago I found a supposed organic treatment — you apply these microbes that allegedly attack the grubs, infect them, and do them in. But after a couple of years of applying according to instructions, they didn’t do a thing. 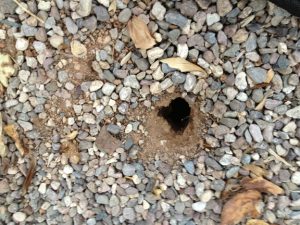 Then a guy at Home Depot — a retired arborist come back to earn a few pennies to finance his loafing — steered me to an insecticide that he claimed, contrary to accepted wisdom, would do the grubs in if applied at the right time of year and well soaked into the ground. That stuff does work moderately well. It certainly cut the number of emergent holes, which at one point were upwards of a dozen around the paloverde tree. Since at any given time an infestation can deliver hundreds or thousands of grubs, you know that for every mature, flying beetle dozens and dozens of babes are chewing away at your trees.

The problem with said insecticide is you can’t apply it to food plants. So if I put this stuff on the oranges, I won’t be able to eat next year’s crop of oranges. And that will not be a good thing. Those oranges are like candy. I gorge on them all spring, starting in February. I can easily eat five or six for breakfast, and then pull off some more during the day.

So I’m loathe to apply it. Not only do I not want to do without next year’s crop, neither do I know whether the following year’s fruit will be safe to eat. And of course, given that this stuff certainly isn’t going to kill all of the thousands of grubs underground (there were still some emergent holes the summer after I dumped it around the paloverde tree), getting rid of them may entail having to apply it several years in a row. Or…now and evermore.

It’s very early for paloverde beetles to emerge. Forgodsake, this is only May! They normally come out at the beginning of monsoon season, which starts mid- to late July. Apparently the combination of heat, humidity, and long daylight hours calls them forth. For two of them to climb out of the ground at this time of year is pretty surprising.

A flock of a dozen whitewing doves are scarfing up the seed I put out this morning. An interested thrasher is also lurking around. Thrashers will eat paloverde beetles. I’ve seen one do battle with one of those armored bugs…and it’s quite a show! So it’s in the trees’ interest to attract some fierce and muscular flying dinosaurs…as well as their cousins, the mockingbirds. 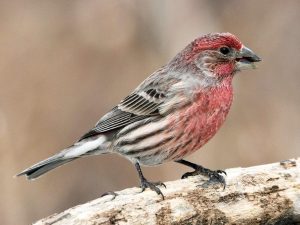 Here’s a thing that looks sort of like a house finch, but he’s probably not getting the type of food he most needs. His head and breast are distinctly orange, not red, which (so we’re told) indicates he’s not finding food with enough pigment to make him red. When you’re a lady house finch, you tend to favor a gent with the reddest possible coloring.

And the requisite pair of Abert’s towhees are back. These fine little birds will clear out an anthole in a few days. They do a funny little dance in leaf litter that involves hopping back and forth to stir things up until they flush a sowbug or some other hapless ground-crawling critter. It is, we might say, a well fed bird in these parts. 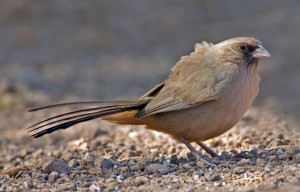 Speaking of the paloverde tree, one of its major branches has become so heavy it has dropped down to the level of the back wall and threatens to rest on the roof. Luis the arborist said he would come by this afternoon (that would mean “some time this week, maybe”) to take a look at it.

Luis is a very fine tree guy, hampered only by the fact that he no habla a helluva lot of inglès. Old-country men have much to recommend them, specifically a kind of grace and courtliness that tempers their machismo. Not only does he have this much-to-be-desired characteristic, he also really knows how to maintain trees. Never once have I seen him hack away at a tree with a chainsaw. He trims and shapes each tree by hand, with his brain fully engaged. He knows what he’s doing, and he does it well.

My plan is to ask him if we can brace that big stem up, because (especially at this time of year!) I don’t want to lose its shade. But I can just imagine what he’ll say about that.

I may have to take out a bank loan to pay him — there wasn’t enough in the checking account to cover Chuck’s bill for the damn Venza’s new battery and also stave off bankruptcy. In addition to the paloverde tree in back, the shrubs I installed in front to block the view of the former Dave’s Used Car Lot, Marina, and Weed Arboretum ran amok this spring. It’s surprising the neighbors haven’t complained to the city about them. So there are at least three very large plants out there that need to be cut back. 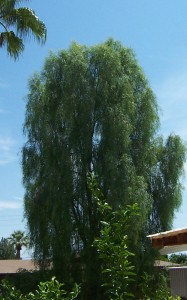 Plus Gerardo would like to say good-bye to the devil-pod tree on the west side. I’d like to see it go, too. But…

a) I do not wish to say good-bye to its shade, despite the unholy mess it makes; and
b) Neither do I wish to say good-bye to one of Gerardo’s cousins, who you may be sure will be sent into the treetop (which touches the stratosphere now) to hack it down; and
c) Nor do I wish to have one of those characters drop a branch on my neighbor Terri’s roof, since I very much doubt my homeowner’s insurance will cover any such antics.

I think it will require a crane to take it down safely, that’s how high the tree is now. And I’m going to afford that…how?