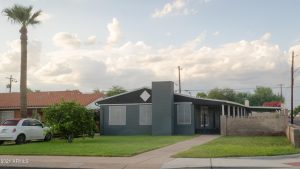 Checked with another Realtor by way of trying to track down a place that might appeal enough to lure me out of the Funny Farm — and thereby take me and Ruby out of the way of any harm Tony and his tribe plan to inflict on our neighborhood.

As usual whenever I peruse the real estate offerings in Phoenix, I see a couple of places that might be OK and a whole lot of places that are off-the-charts not OK.

The problem is, my current house is so close to perfect for my needs and my tastes that rather little appeals. Uhm…make that “rather little” a “nothing.” Seriously: the house has ruined me for the real estate market!

Willo, a historic district in the central part of the city, is the home of the first house my husband and I lived in. We would still be there if we hadn’t had a kid (couldn’t put him in the public schools there) and the crime rate. And, after they installed a fire station a block away, the spectacular noise level.

Here’s a house in Willo that’s similar in style to ours, though significantly smaller. The place was not a tract in the sense of modern ticky-tacky — every house was different. This sorta Santa Barbara Spanish look was one of several very different styles of architecture that inhabited the place.

Hmmmm…$1,700,000 for an apartment on Central Avenue. Eight hundred seventy-five K for a modernized house that looks about as inviting as a prison block.

Here’s this pleasant-looking place, all decked out in the latest shade of penitentiary gray. It has only one serious drawback, to my taste: it’s right on Seventh Avenue, one of the busiest commuter thoroughfares in the city! That may explain the bargain price of a mere 530 grand.

Seriously. When you look at this stuff — and those brain-banging prices! — you come to suspect I’ve got the best of all possible worlds in this house. It has all the features of the best of the offerings on the market and none of the disadvantages. It’s paid for.

And you may be darned sure I didn’t pay five or six hundred thousand bucks for it! 😀