Yes. If there was ever any question whether Funny is politically incorrect (really??), let it be forever dispelled: I love the Walmart in our neighborhood.

Well, in the first place, it’s the only grocery store within about an eight-mile radius where I feel safe getting out of  the car in the parking lot. This is because unlike the Safeway or the Albertson’s or the Walgreen’s or the Sprouts, they hire a security guard service. Actually, staffers at my favorite coffee house, right across the asphalt from the Walmart, say the shopping center hires the service, apparently grâce à a kind of protection racket (don’t ask: I can’t prove it; it’s just a rumor). When you don’t see an armed guard ambulating around the property, you see a massive male Walmart employee lurking out in front, allegedly wrangling the shopping carts but in fact transparently keeping an eye out for shenanigans.

The much-abused (so we’re told) staff at the Walmart are always nice to you. I’ve never met an employee there who wasn’t polite, kind, and helpful. And, as a lagniappe, nary a one of them is stupid as a post.

If they don’t know where something is (they usually do), they’ll try to find out. This is not invariably true at those other fine emporia: I no longer buy meat from the Safeway’s meat counter because one of their butchers was so rude to me. I’ve had clerks at the Whole Foods recognize at a glance that I decidedly did not belong there. At the Albertson’s…well, good luck finding an employee: they’re like Seldom Seen Smith. The staff (when you can find one) at the Paradise Valley Fry’s are very nice, but their efforts are negated by the Maserati-driving customers, who recognize poor white trash when they see it. 😀 Ditto the clientele at the Whole Foods, which since Amazon’s takeover sports even fewer hired help than the Albertson’s. But at the Walmart? No one at the Walmart treats you as though you don’t belong there, even when they are visibly tired, stressed, and overworked.

Which brings us to another small truth: Walmart people are my people.

That’s right. The customers behave as though they were decent human beings, even when they’re dressed in rags and buying their groceries with today’s equivalent of food stamps. I love Walmart people.

They’ll all talk with you, genially enough, as though you were at a small-town corner grocery. Who knows? Maybe you are. Maybe Walmart is actually a port to the Twilight Zone.

I love these people because there’s a decency to them that you don’t find in the overpriced Fry’s or the Amazonized Whole Foods or the self-righteous Sprouts. No: they’re no more decent than you or I or Ms. Gotrocks. But they don’t hide what decency they have behind an elitist façade.

Today I rolled toward the checkout stand and found, ahead in the closest line, a clear and present homeless dude. Being old, single, and jaded, I tend to be wary of single homeless males. They can be all right. Or they can be…well, in need of medication. So….I roll into a longer line behind a youngish guy who appears to be, shall we say, mildly disabled intellectually. He’s clean, he looks honest, and I know I’m smarter and faster than he is, and so he’s my choice of fellow shoppers. Behind me: two other homeless or near-homeless guys, one of them hauling an oxygen tank. They’re clean enough and quiet. We wait until the cows come home while the cashier checks out the guy in front of the intellectually questionable guy. Then we wait some more because he has a sh!tload of stuff. In passing I think about asking the two homeless-looking dudes if they’d like to get in front of me but think better of it because they also have a basketful and I only have three things.

One of the guys ambles over to the machine that dispenses lottery tickets and shoves some change in there. The pot is $245 million. Silently I send a petition heavenward: Goddess! Hey, Goddess? Yeah, you, Ma’am. Please give this guy 245 million bucks. She refrains from emitting a reply at that moment. 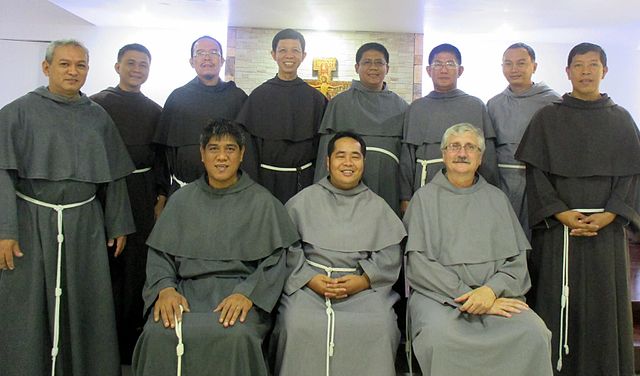 To our right, another show is going on. We regulars who are in the know happen to know that the customer service desk will check you out, just like any of the check-out stand. Most people don’t do that, even though we’re aware of it, because it’s kind of rude to occupy the customer service lady with routine cashiering when there are people who really do need some special attention. But because it’s busy, a half-a-dozen shoppers are stacked up there, too.

Among them is a guy in a dress.

No: he’s a monk! A real monk. He’s wearing gray Franciscan robes and he has a beautiful crucifix around his neck and…by heaven, he’s the handsomest man you have ever seen in your life. Born 40 years too late and about 90 degrees too religious. But…gorgeous. And he exudes a kind of radiance. This is a man who is deeply happy, so it seems: presumably in his vocation.,

Happy New Year to ye, brother. And many happy more.

Wanna know a little secret? You’re not gonna see that guy at the Whole Foods…

Moving on… The reason I had to make a run on the Walmart was that I ran out of doggy pee pads. Poor little Cassie is really sick (again, still). And as you know, whatever little needs or emergencies that need to be attended to always occur on a major holiday. Wasn’t sure the store would be open today, but was very pleased to discover it was doing business.

Cassie has been going through four or five pee pads a day, between pissing on them (or missing them and puddling up the floor) and shitting on them. This is turning into a bit of a nightmare. Yesterday after cleaning up, cleaning up, and cleaning up again, I realized that I did not have enough paper sponge pads to last another 24 hours. And this, m’dears, presented a major problem. If it turned out that the Walmart was closed today — as any retailer that treats its employees decently would be — then the dogs and I were going to have an Issue.

What on earth was I going to do if the Walmart was closed? Really: THE last thing on this earth I felt like doing was running around the city searching for pee pads. Wheeeee!

But thank God Walmart treats its employees like slaves and yes, they were indeed impressed into service on New Year’s Day.

Last night was the usual seven kinds of Hell presented by New Year’s Eve in the ’Hood. Offered the opportunity to buy any kind of fireworks they like, folks rich and poor will do exactly that, and spend half the night blasting away with those and with their cannons.

The locals start shooting off fireworks and guns about 11:30. This goes on until they run out, around 1 a.m. The idiots out in the alley, right behind the house, are blasting away…but that’s alright because the racket is going on for miles around. At least it’s raining, cutting the fire risk out there. Gerardo sprayed the weeds behind my knucklehead neighbor’s house, but he didn’t cut them down, so there’s a swath of dried-out dead grass and brush out there. I’d hoped the rain might keep the ninnies inside in front of their televisions…but ohhhh no!

The racket scares the bedoodles out of Ruby, so there’s no chance of diving under the pillow and trying to sleep. She paces around anxiously, threatening to jump off the bed. Said sack has one of those stupid double-thick mattresses…I didn’t realize how ridiculous it was until they delivered it, at which point is was too late to do anything about that bad choice. It’s so high that if she jumps off, she will hurt herself, and then I’ll get to drive through the dark and the rain, dodging bullets, to take her to an emergency vet.

Time passes. Eventually she settles down.

3:30 a.m.: Dog pacing awakens the human. I imagine it’s Ruby, probably hearing another round of ordnance going off — the drunks don’t stop just because midnight happened three and a half hours ago.

“Go to sleep!” I growl. Dog pacing continues. Get up. Turn on the light.

It’s not Ruby, it’s Cassie, experiencing an embarrassing urgency. Lift her off the bed. Set her on a pee mat, hoping she’ll go there because it’s freaking cold and wet outside. While I search for my shoes, she squats on the pee mat and goes PHPHBHPPHFFFPPTTTT…. Doggie effing diarrhea. Then she waddles off the end of the pee mat and goes PHPHBHPPHFFFPPTTTT some more: all over the tiles.

Well, I should be glad that it is tilework and not damn carpet. And not on the bed. But I’m not THAT glad. I lose my temper. Swear the dog is going to have to go: I cannot be on my hands and knees scrubbing floors with disinfectant four, five, six times a day, 24 hours a day. This is no longer a viable arrangement.

Get another pee mat — running out, and I expect the Walmart will be closed tomorrow. Toss it on the floor.

She immediately waddles over and pisses all over it.

Get another pee mat. Tear it whilst shaking it open. To$$ that in the garbage.

Get out another one — now there’s only one or two left, and I’ve been putting down four or five a day. There are three on the bed, which I can take off and lay on the floor. That means both dogs will have to sleep on the floor tonight, which means they’ll be banging against the bed all night long. What the hell. I haven’t had a full night’s sleep since Cassie got sick, along about the first of September. So it doesn’t much matter.

The damn burns on my wrist itch like fire, as does the rash. One of these burns is going to leave a perfectly hideous scar. On the positive side, the rash is going away, so I guess it must not be MRSA. That’s something. I guess.

Another blast of ordnance goes off — now almost 4 a.m. Sounds more like a shotgun than a cherry bomb. But the stuff they sell in the Albertson’s and Home Depot parking lots at this time of year really does sound like…artillery fire.

Ruby, terrorized again, tries to jump off the bed. Get up, lift the dog down to the floor, search for shoes so as to take that dog outside. No: by the time I find my shoes, she’s hiding behind the toilet. Call her: she stays put. I lose my temper.

Go in the other bathroom in search of lidocaine to smear some on the frantic itching.

Well, no…that stuff I squished out onto my arm is sun block. F***!!! Scrub off the wound and rashes. Apply lidocaine.

Dog comes out. Call her to let her out in the yard. She dives back under the toilet.

Well. Who can blame her? The human is visibly NOT a happy camper… and the bedroom now stinks enough to gag a skunk.

Speaking of the knucklehead, those two acquired another dog, apparently as a Christmas present. It’s a yapper. So now they put this animal out in their backyard and it stands there and BARKS. And barks and barks and barks and barks….  This causes their other dog to start yapping. Cassie is too sick to bark back…but Ruby isn’t. When she hears that mutt barking, she runs out there and joins the chorus.

What the heck. The guy’s prob’ly so high on meth and booze he can’t hear it. Or couldn’t, if he weren’t already stone deaf. Or…heh…stoned deaf. 😀