Argh. We’re definitely not in Kansas anymore, that’s for sure!

As a side note to today’s craziness..do you  like to bake bread? If so, try to get your hands on some of this stuff. 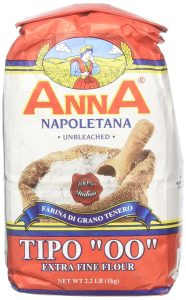 This is the Italian flour the Instacart lady showed up with a few days back, instead of the regular white unbleached Pillsbury-type stuff normal people use. Never heard of it, but since actual white flour is now a collector’s item, yesterday I decided to “stretch” my remaining flour with some of the Italianate stuff.

So, my breadmaker holds 5 cups of flour. I put in 2 cups of the Anna Nappy stuff and 3 cups of regular flour and then proceeded as usual. I like to have the breadmaker knead the dough; let it rise in the breadmaker’s container; then turn it out into a couple of loaves, let them rise on the counter, and pop them into an oven. (Tastes better than cooking in the breadmaker, for unknown reasons…)

Well. This combo made, bar none, THE most delicious white bread I’ve ever concocted!

Dunno what it would do if you tried making the bread with nothing but the fancy Italian stuff, but a slightly less than 50/50 mix was awesome.

Speaking of food scarcity…M’hijito decided to opt the Costco junket this afternoon. Becaaauuuse: they won’t let you in there without a face mask, and he doesn’t have one.

Jayzus…. So I ordered up a few items via Instacart.

Costco has at least 50 varieties of cheap….ahem… delicious wines in the $8 to $12 range. Online? You can access two of them. Yeah. Neither of them anything you’d care to have. So I ordered one mediocre bottle of cheap red, and I guess when that’s gone — about a week from now — I’ll have to send another pup to Total Wine or AJ’s to get a couple of decent vintages.

And are they gouging on the prices!!!! One bag of Ruby’s favorite chicken jerky doggie treats? $24.39. Yeah. No kidding. For 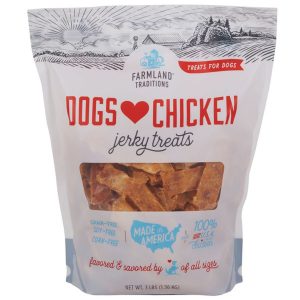 Mygawd. You could buy a damn chicken and turn it into jerky on your grill, for a whole lot less than that.

{sigh} So I guess I’ll have to make my son a face mask. On the other hand, one of the women in the ’Hood has been making and selling them: $6 apiece. That might be preferable to cutting up a good scarf or pillowcase for the purpose.

Eventually, an Instacart guy showed up from the first Costco run of the day. (A real cutie, we might add! Born a mere 50 years too late…) He couldn’t find the brand of cheddar cheese I buy ALL the time there, and tried to claim he’d asked someone for it. This, after I explained in the special instructions where to find it. That’s hopeless BS, because the stuff is a standard there — has been for years.

So…after giving them several chances, I’d say Instacart is NOT going to do the trick as a stand-by in one’s dotage. Their contract help just doesn’t understand enough about food or about shopping to come up with the most ordinary boring stuff that you buy all the time.

Exactly how you would work the age-in-place scheme if you couldn’t get to the store and dodder around in it…escapes me. It might be that you could hire a college kid to make grocery runs for you. In that case, you’d have to do some serious training, because Americans apparently know next to nothing about real food. Evidently all anyone eats anymore is processed junk. So…how do you help them to recognize real food and, in the case of produce or fresh, raw meat, to discern whether it’s any good????

Thought I was kidding about the food dehydrater? Hmmm…not sooo much. The top of the line for these gadgets at Amazon sells for what three (count’em, 3) bags of doggie treats go for at Costco. Cheaper ones range from $40 to $60. Forhevvinsake, it would pay for itself in doggy treats alone in about three months…plus you’d know what was in the stuff.

The lady who makes the face masks says she’ll put a couple of them in her mailbox. So I’ll drive one down to my son, which will elicit a crabby response but at least he’ll have one. And so will I. I’ve been too lazy to make the things (plus I think it’s pointless, since they do nothing to protect you from getting the bug and probably do rather little to protect anyone else). Anyway, at least we’ll each be able to disguise ourselves as righteous, when called upon to do so.

heee heee hee HEEE! On that note, that idiot Trump is in town, entertaining his constituency of morons and sheeple. I just checked news.google.com and found THIS bit of hilarity.

Nope. Not in Kansas any more…

1 thought on “Not in Kansas Anymore…”